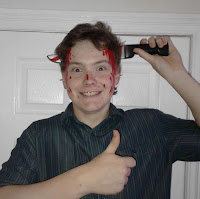 Mark Harrison is a young-ish writer who gallivants around Teesside with his airs and graces and his Media Studies degree. He has a passion for cinema and storytelling, and sometimes enjoys talking about himself in the third person too.

When he's not blogging as The Mad Prophet, he contributes articles to Den of Geek, and writes and performs as part of the comedy sketch troupe, Cheap Craic. You can follow him on Facebook and Twitter for more concise ramblings about film and the like.

If you must, you can email him on mharrison1990@gmail.com.

"I'm impressed by anyone who can review while seagulls are flying overhead."
- Mark Kermode

"Talking to you about films is like talking to Hitler about why he doesn't like Jews."
- Jay Fraser (inebriated)

Double Take The Facebook page for the radio show I co-host with Rob Simpson- the first take is for new releases, the second for classics.
Den of Geek Cult TV, movies, games and comics reviewed, discussed and appreciated.
Writers' Block North East A veritable hive for creative talents from all over the North East.

But We're British! Reviews of old-timey British horror films from Hammer, Amicus and other assorted studios.
Cane Toad Warrior Reviews of a broad range of films, updated daily (more or less)
Dreaming Genius A watering hole for independent creative talent.
Experience Cinematic Film review and journal from a Canadian film lover
The Film Trolls A blog for film reviews and discussion of great trailers.
I Don't Like Popcorn Reviews of so-bad-they're-good and cult films.
The Picture House Reviews and essays on a range of films from a student and film-lover.
Trash Film Guru Film reviews, specialising in grindhouse cinema and recent releases.