From January 2011 to November 2012, I participated in BlogalongaBond, a grand blogging community experiment in which all 23 Bond films were reviewed, one per month, in the run-up to the release of Skyfall. Below are links to all of my reviews, which I have chosen to categorise by the wisdom offered in each instalment... 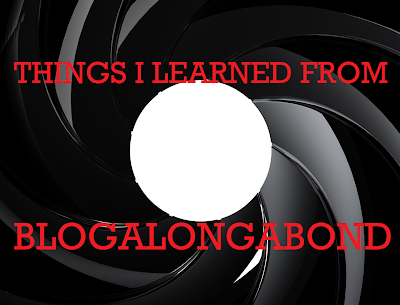 #1- There is a man who everybody always calls Pussfeller. It remains to be seen whether or not he actually likes that name.
#2- You can start running a bath in a Turkish bridal suite and then leave it when you find a gorgeous woman in your bed. You won't flood the hotel and it'll never be mentioned again.
#3- Sometimes the adventure that plays out pre-credits is more interesting than the film itself. Heroin-flavoured bananas! Imagine how the monkeys would react!
#4- Death by spine-stretching table would be the most humiliating fate imaginable. Not only would you die in a spa, but images of your final moments would make for a great GIF-based LOL.
#5- A valmorphanised "Japanese" Sean Connery looks awfully like a Vulcan Sean Connery. Live long and proshper!
#6- Tracy only turns up for Draco's birthday party every year because if he's ever unsure you'll accept a formal invitation, he'll send his men round to kidnap you.
#7- Blofeld is so unconvinced by his own drag act that he has to keep his pussy firmly in hand the whole time.
#8- "A small hat, belonging to a man of limited means, who lost a fight with a chicken"- in another life, Bond might have been a bitchy fashionista.
#9- If a character is annoying once, he'll be doubly annoying the second time around. Fuck you, Sheriff J.W. Pepper.
#10- "Any man who drinks Dom Perignon '52 can't be all bad." And any man who kills a fish-lover and then drinks the liquor from his escape pod is more of a magnificent bastard than I realised. Kudos, Roger Moore.
#11- The explosion of several dozen beautiful civilians goes unmourned, but to be fair, really ridiculously good-looking people die in freak gasoline-fight accidents every day.
#12- This Christmas, a delicatessen of stainless steel is not the way to say "Sorry I Assassinated Your Wife On Your Wedding Day And Tried To Murder You With A Remote Control Helicopter."
#13- "Octopussy" was just a cute nickname from her dead dad. This series is corrupting my mind.
#14- Roger Moore's appearance on The Muppet Show was actually better than five of his seven Bond movies.
#15- Austrian border control might as well be scaled back to a sign that reads "You must be at least this awesome to enter".
#16- Felix has put his life on the line for Bond, "many times". Presumably all off screen. Still, that explains why he's so often regenerated...
#17- Amongst Bond's many superpowers, he can get himself and Xenia dressed, out and about, presumably while still holding her at gunpoint.
#18- Problem- an enemy pilot bastard is trying to garotte you with a wire. Solution- fire him out of the plane and keep everything crossed that he doesn't hold onto the wire and take your head with him.
#19- Sometimes, when Pierce Brosnan is underwater, he'll do something as cool as straightening his tie. Other times, he'll pull this face.
#20- Like Roger Moore before him, Pierce Brosnan had more dignity when he appeared alongside the Muppets than he did in half of his Bond films.
#21- Le Chiffre has an unfortunate tendency to say he has more friends than he has in reality. This is especially unfortunate for Mathis.
#22- A Bolivian taxi driver was told to buy a cab by his grandmother. This is clearly more important than the other foreign language conversation that Mathis was having at the same time.
#23- On Turkish trains, you can disconnect carriages, rip the back end off and have an extended scrap on the roof, but the driver ain't hitting the brakes for any of your bullshit.