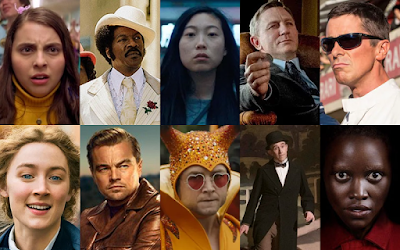 It's almost the 2020s, but would it be New Year without me dusting off the blog for a single annual post about my favourites of the year? Well, it would be anyway, but let's do this again anyway. 2019 has been a pretty good year for the movies, at least insofar as I feel like there are hundreds of apparently great movies I didn't get around to seeing.

As usual, real life has got in the way of me catching up with various films that I suspect might be up my alley, including Aniara, Bait, Eighth Grade, Monos, Only You, Ordinary Love, and One Cut Of The Dead. On a similar note, confining myself to 10 choices rules out films like Avengers: Endgame, Doctor Sleep, High Flying Bird, Hustlers, If Beale Street Could Talk, The Irishman, Marriage Story, Pain & Glory, Ready Or Not, Shazam!, and Thunder Road, none of which would look out of place on a longer list.

But many of those are among the best films of the year and I'll happily write about any of them another time. For now, these were my favourites of the year, based on UK release dates for films I saw. As usual, they're listed in alphabetical order because there'll be quite enough of good films competing over the next few months, but my notes should give you an idea of how I'd rank them if pushed. Here's how I'll remember 2019 at the movies...

Email ThisBlogThis!Share to TwitterShare to FacebookShare to Pinterest
Labels: best of 2019, booksmart, dolemite is my name, knives out, le mans 66, little women, movies, once upon a time in hollywood, rocketman, stan and ollie, the farewell, us 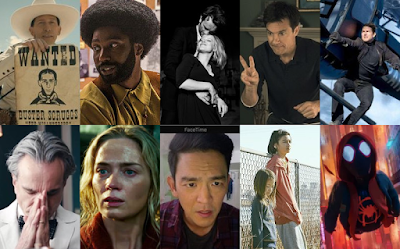 I know, I know - 2018 is soooo last year. It's a good job I don't do these annual roundups for clicks, really, but with real life getting in the way, I've had a bit more time to collect my thoughts on the best films of the last 12 months. It's been a busy year for me and it was only around the halfway mark that I started to realise that it could rival the highs of 2017, which meant I had some catching-up to do before writing this list.

At the time of writing, I haven't yet caught up with some films that are definitely up my alley, like Unsane and The Old Man And The Gun, and confining myself to 10 films means I have to leave off 10 more films I loved, like American Animals, Anna And The Apocalypse, Avengers: Infinity War, Coco, First Reformed, Hotel Artemis, Lady Bird, Mandy, Upgrade, and Widows. Oh, I'd have had the first hour of A Star Is Born in there too, before the bit I'm really trying hard not to call "the afterbirth".

But this list, like those cheeky bonuses, will be alphabetical rather than ranked. They're based on UK release dates, so don't go on about how some of last year's Oscar films are in here and some of this year's aren't. As we charge into the last year of the 2010s, here are my favourites of 2018.