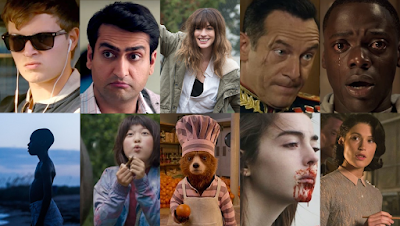 Well, it was a good year for movies, at least. In fact, in terms of genre films, it's been absolutely exceptional, making it harder to condense this annual list down into a top 10. As I said before last year's list, this kind of thing is only ever a snapshot of where we are at the time of writing, and frankly, the choice of excellent films that I really loved this year didn't make it any easier.

For every crime movie, there's a Logan Lucky. a Good Time or a I Don't Feel At Home In This World Anymore that didn't quite make it. For every horror film, there's a Gerald's Game or an It, (but categorically not a Dark Tower.) There's sci-fi, but there's no Last Jedi, which may be the most invested I've ever been in Star Wars, and I didn't manage to squeeze in Guardians Of The Galaxy Vol. 2, Wonder Woman, My Life As A Courgette, My Cousin Rachel, Dunkirk or The Killing Of A Sacred Deer either.

See, I just sneakily named twelve great movies from this year that didn't even make the proper list. But here's another list, not ranked, but (mostly) ordered alphabetically, of the ones I really loved this year. Other than that, they're all based on UK release dates, so if you've already seen The Shape Of Water, do us a favour and don't go on about it until we get it, in February. They're my favourites, but who's to say they're not also the best?