On some level, every film is a time capsule from the year in which it was released, so it's fitting that 2016 was full of disappointments when it came to the really big films. But aside from the worst summer for blockbusters since the turn of the century and the greatest number of unnecessary sequels since the 1980s heyday of Weekend At Bernie's II, last year was very good for smaller films, as detailed in my previous post.

Plus, aside from every single other way that 2016 felt like a historical turning point, we'll probably come to look back on last year as the point where Disney finally started absorbing the whole box office. After another decade of movies from Marvel, Pixar, Lucasfilm and their own animation studio, they might as well acquire Batman, James Bond and Minions too and have done with it. More importantly though, they've had a better year than any other studio because the films they distributed in the last 12 months (with the notable exception of Alice Through The Looking Glass) have all been blindingly good.

One of their films features in my top ten list, which is ordered alphabetically again, for two reasons. It's partly because there's a film beginning with A and a film beginning with Z, but it's mostly because these are all favourites for me and in previous years, I've changed my mind about the order of a countdown about 20 minutes after hitting "Publish", and then every 20 minutes after that for about six months.

As always, this is based on UK release dates, so 2015 films that came out here in January or February are eligible, but 2016 films that are still upcoming such as La La Land or Silence are not. On top of that, all favourites are very subjective, though you understand that I'm also very right. 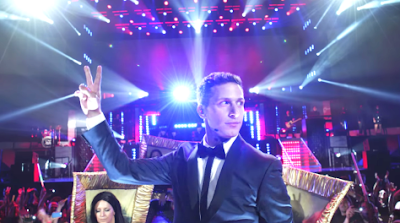 At the end of a year like this, it feels futile to do the traditional worst of the year list. 2016 has been the fucking pits and mere bad movies, like Dirty Grandpa, London Has Fallen and most of the films featuring Batman, pale in comparison to the really bad things about this year, like global instability, celebrity deaths and The Great British Bake Off moving to Channel 4.

The year has given me plenty to rant about in the cinema, but after such a rubbish year, what's the point of railing against the "why did you say that name?!" scene or blasting the bit where Tom Hanks forgot what coffee was, or completing my long-gestating essay on why the Dad's Army reboot is Brexit-made-cinema?*