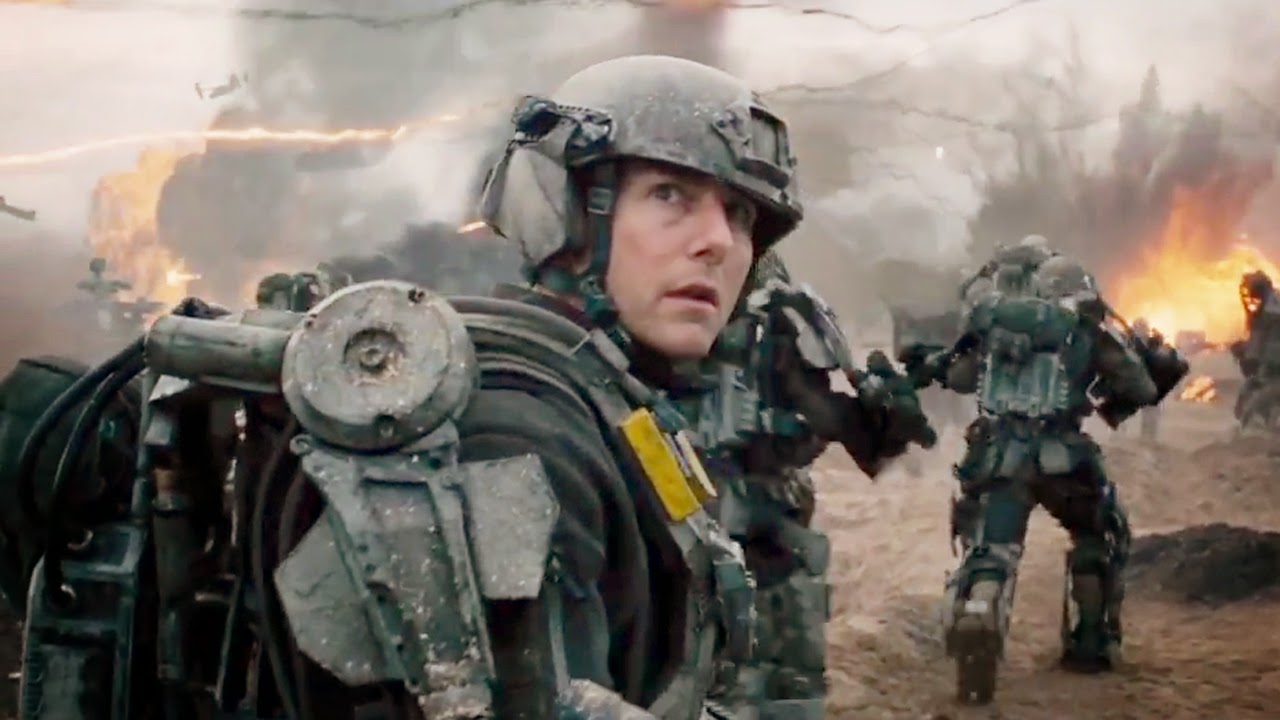 You know how the recent X-Men: Days Of Future Past used timey wimey shenaniganizing to pull the same trick of killing off familiar (if not beloved) supporting characters more than once? Remember how boring that immediately became after we'd seen it the once? By contrast, part of what Edge of Tomorrow does so well can be seen in how it repeats the same feat more frequently, more creatively, and with Tom Cruise standing in for New Mutant Character #456.

The film takes place in one of those near futures where Earth is at war with aliens, but the humans find their every move somehow anticipated and mimicked by the invaders. A bitter conflict has ensued and it's at the turn of the tide that PR man and armchair hawk Major William Cage is press ganged into leading the big push against the Mimics. He is hilariously unprepared for combat, but upon the event of his undignified and unusual death, he awakens 24 hours in the past, given the chance to relive the fateful day over and over again.

Some have inevitably compared it to Groundhog Day, even though the plot devices are far more similar to Source Code. Just like Duncan Jones' film, this one goes to great lengths to explain just how the ability to restart the day actually manifests itself in this sci-fi context. What it does share with the Harold Ramis classic is that its protagonist falls into this cycle by accident and in the grand scheme of the movie, it's because he desperately needs to develop as a character. Because ladies and gentlemen, this is the film you never knew you wanted- the one which starts out with Tom Cruise more or less playing Arnold Rimmer from Red Dwarf. 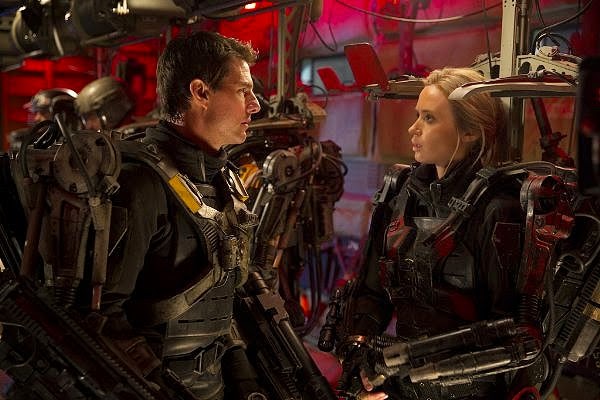 Sure, he's off and running as only Tom Cruise can within the first ten minutes, but he's literally running away in cowardice when Brendan Gleeson's general orders him on a suicide mission. Like Rimmer, Cage is a character who's been comfortable wearing the uniform and pulling rank, while also nimbly avoiding combat like the weasel that he is. More comfortable pushing young soldiers towards the battlefield than actually doing anything himself, Cruise wails and screams his way through combat even before he starts dying and it immediately throws your expectations off-kilter in a way that director Doug Liman capitalises upon all the way through the film.

Its capacity to surprise is all the more impressive, seeing as how it's obviously not the most original sci-fi film ever made. Aside from a more than passing resemblance to both Groundhog Day and Source Code, there's a fair bit of Paul Verhoeven's Starship Troopers in there too and the satirical edge complements the basic slapstick value of Cage's repeated, brutal deaths rather nicely. As you'd expect from a script in which Christopher McQuarrie had a hand, it's thankfully more like a District 9 than the likes of last year's Cruise vehicle Oblivion, taking its cues from outside of the sci-fi genre too.

The futile beach assault that we see throughout the film is obviously meant to evoke the opening of Saving Private Ryan (it's even set in the same place) and there's an undercurrent of satirical disdain for the brand of suicidal assault seen throughout history. Gleeson has that brief role as the dickish superior who sells out Cruise to salvage his own image as a terrible leader, and as long as we're comparing to characters in classic British sitcoms, I think I might have liked for the general to baa more and also to have been played by Stephen Fry.

All of this is without mentioning the always brilliant Emily Blunt, who does far more than just play the Andie MacDowell figure in this Groundhog Doomsday. Her Rita Vrataski is properly hard as nails- the most decorated soldier on Earth, variously nicknamed "the Angel of Verdun" or "Full Metal Bitch", whose battle prowess has been bolstered by a previous experience with the same resuscitative quirk that's gradually working to Cage's advantage. Blunt has at it with the same kind of physical commitment and intensity that we saw in The Adjustment Bureau, in the dance sequences she had to learn for that film. It also helps that she has terrific chemistry with Cruise- he goes well with most romantic leads, but she gives as good as she gets all the way through, and the two are a joy to watch. 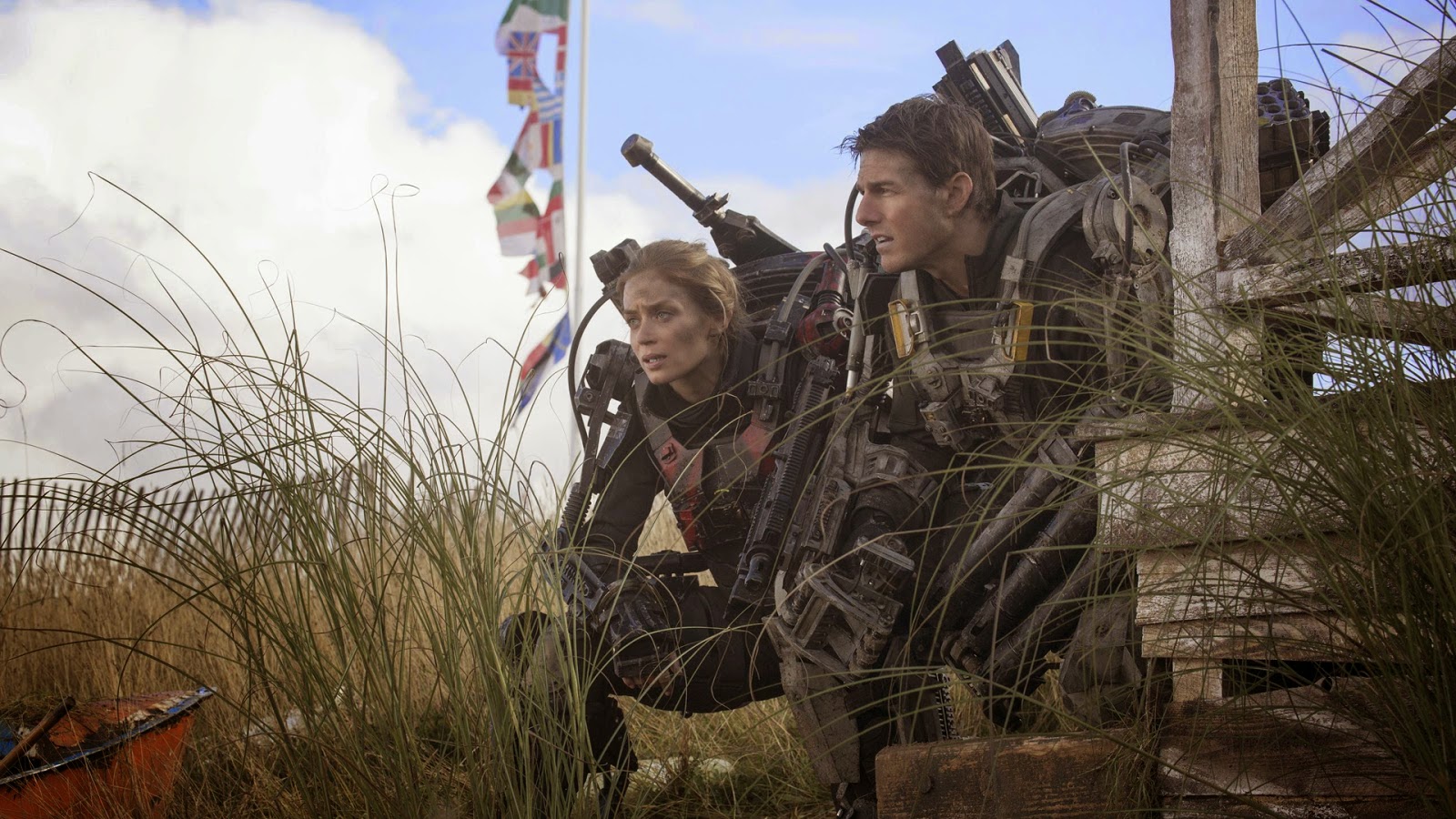 Basically, Edge of Tomorrow is about 99% brilliant- a properly witty and exciting sci-fi blockbuster that never falls back on a repetitive gimmick when it can use the very same gimmick to build some fun action sequences or genuine, interesting character development instead. Tom Cruise never gets all the way around to superheroic (or Ace Rimmer) competence, Emily Blunt makes her character more than you'd expect and even if it were only those two being brilliant together, it would be a must-see. It's only a shame that the very ending is so dunder-headed as to make you wish they'd had a chance to run through the script one more time and change things for the better, but it's still hugely enjoyable up to that point.

I'm Mark the mad prophet, and until next time, don't watch anything I wouldn't watch.
Posted by Mark at 09:30