Photographer Annie Leibovitz started releasing Disney Dream Portraits in 2007, putting celebrities in the roles of classic animated characters. There have been some stunning tableaus in that time, but somehow the billion-dollar success of their Alice In Wonderland remake in 2010 seems to have inspired Disney's in-house feature film division to make this their game plan for the next few years.

Based on Disney's 1950 version of Sleeping Beauty, which holds up as one of the studio's better animated fairytales, Maleficent is a Wicked-style re-jig centred around the terrifying villain of the title. Maleficent is a good fairy who lives with the fair people, in a lush forest full of magic, but the world of men is aggressively expanding. When she's betrayed by a man who eventually becomes King, Maleficent places a dreadful, irreversible curse on his firstborn daughter, princess Aurora. As the years go by, she watches the child grow up and realises the terrible toll that her revenge could take on the kingdom.

First and foremost, it feels churlish to take so strongly against a massive tentpole movie based around a female lead character. Angelina Jolie is, on paper and in practice, a great casting choice for the role of Disney's most iconic villain and she grabs hold of the role with both hands. But Maleficent is the most terrifyingly cruel of Disney villains precisely because her wrath is so great at what appears to be a mere snub at Aurora's christening and she only gets worse from there on out, with no explanation of how she became so damn mean.

There are definite grounds to explore this character, as an anti-hero or as a villainous protagonist, but Robert Stromberg's film barely traverses it. To be fair, the film has almost surgical signs of a last minute edit to get it down to a perfunctory 90 minutes. Peter Capaldi is at least one major player who seems to have escaped the wreckage via the cutting room floor in the process. Perhaps a studio hatchet job explains just about every other character in the story is flattened down, so as to accentuate Maleficent's most basic parts. 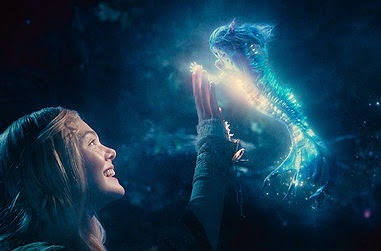 Oh, but just in case we don't sympathise with her for the utter lack of three-dimensional characters with whom she can interact, Linda Woolverton's script also files off any demonstrable nasty edges that the character may have had. Aside from that pesky curse, it's soon established that Maleficent would never actually hurt the princess she hates so much, as if she's realised a long while after we did that she probably should have cursed Stefan instead. After all, he's the one who pissed her off so royally in the first place, which isn't just a revisionist take on the story we know- it's a nonsensical setup for her to have a go at his daughter instead.

The film also marks the new low point of these effects-driven fairytale movies that Disney has put out and marketed identically in the last few years, starting with Alice in Wonderland in 2010. The contrast provided by having last year's Oz The Great & Powerful in between these two films really shows up the difference when there's a sensibility at work over style. Even if Tim Burton absorbs everything into his own staid style these days, he and Sam Raimi both brought their own personalities to bear on their respective projects. Stromberg, promoted to the director's chair from being a special effects artist on those previous films, brings nothing to the table.

That only leaves the digital house-style of these movies thus far, including the weird aversion to having its creatures or scenery look photo-real- for such an expensive movie, the animals in the film look relatively cheap, to say nothing of the uncanny valley effect of the shrunken fairy characters. As mentioned, Jolie grasps this leading role with both hands, even with very little to hold onto, and is easily the best thing about the film. Even so, she's mostly only required to act bemused and spit out a "Hm" (which happens at least every five minutes and is played like it's a big deadpan comedy moment every single time). Her one big showcase scene early on is one with undeniable impact and disturbing undertones, which is completely undercut by the fantastical meringue that follows. 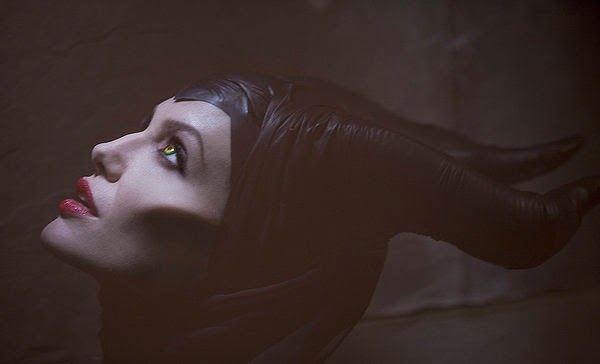 Despite quite looking forward to this one, Maleficent is close to the worst version of what I expected it would be. It's just like one of those Annie Leibovitz portraits, but with less depth. It's not even six months since the marvellous Frozen showed us how well this kind of modern fairytale could be done, but this one seems to have missed the memo. Instead, its idea of revisionism is to iron out the pesky personality in every character other than the lead and it's only through a perfectly pitched panto performance that Jolie herself avoids being flattened by this predictable, humourless, visually boring slog.

I'm Mark the mad prophet, and until next time, don't watch anything I wouldn't watch.
Posted by Mark at 16:30