Photographer Annie Leibovitz started releasing Disney Dream Portraits in 2007, putting celebrities in the roles of classic animated characters. There have been some stunning tableaus in that time, but somehow the billion-dollar success of their Alice In Wonderland remake in 2010 seems to have inspired Disney's in-house feature film division to make this their game plan for the next few years.

Based on Disney's 1950 version of Sleeping Beauty, which holds up as one of the studio's better animated fairytales, Maleficent is a Wicked-style re-jig centred around the terrifying villain of the title. Maleficent is a good fairy who lives with the fair people, in a lush forest full of magic, but the world of men is aggressively expanding. When she's betrayed by a man who eventually becomes King, Maleficent places a dreadful, irreversible curse on his firstborn daughter, princess Aurora. As the years go by, she watches the child grow up and realises the terrible toll that her revenge could take on the kingdom.

THE TWO FACES OF JANUARY- Review 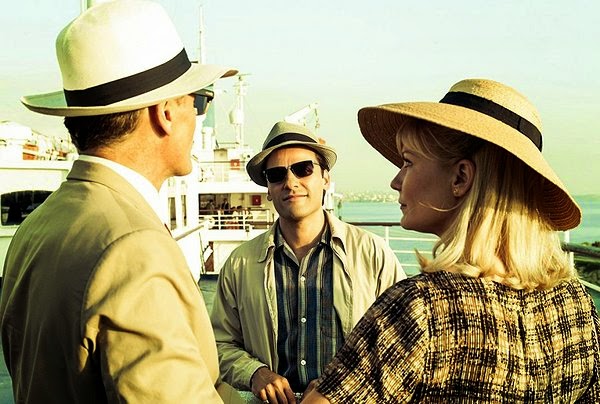 Oscar Isaac's star is on the rise now that he's getting roles like Llewyn Davis, to say nothing of the recent announcement that he's joining JJ Abrams' Star Wars movie, (take a shot for obligatory off-hand mention of Star Wars) but that makes him all the more interesting as a foil to his co-stars, the more seldom-seen Viggo Mortensen and Kirsten Dunst.

Together, they do all the leg-work in The Two Faces of January, which mostly has the feel of an old-fashioned three-hander. Based on a novel by Patricia Highsmith, it's the story that follows Rydal, an American tour guide in Athens, after he bumps into a couple, Chester and Colette MacFarland in 1962. Although he's a consummate conman, his scheming fizzles out when he becomes infatuated with Colette and feels obliged to help when the couple are suddenly compelled to leave the country under suspicious circumstances.

X-MEN: DAYS OF FUTURE PAST- Review

This review may contain minor spoilers. If you know me, you know I'm not an egregiously spoil-y writer, but this film is bloody packed with plot before it even gets going. If you'd prefer to go in knowing nothing, come back and read this after you've seen the movie. 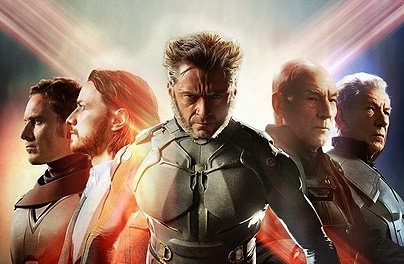 Wouldn't it be wild if Sony took the lukewarm reception of The Amazing Spider-Man 2 as a sign that they should get Sam Raimi back, with all of his iteration's cast and continuity? Or if we finally got Dredd 2, but with Danny Cannon showing us how Sylvester Stallone's Dredd is in canon with the reboot? Because Fox has basically done just that with X-Men: Days Of Future Past.

Pouring the ensemble of the early X-Men movies in with the younger cast of 2011's soft reboot First Class, this is a densely plotted sequel/prequel/reboot, loosely based on the acclaimed comic arc of the same unwieldy name. The not-so-distant future is looking bleak for mutant-kind as invincible Sentinels hunt down the last of the X-Men. With the help of Kitty Pryde, Professor X and Magneto devise a plan to quantum leap Wolverine's mind back in time, circa 1973, to bring together Charles and Erik's younger selves, then bitter enemies, and change history for the better.

Gareth Edwards (who is not to be confused with The Raid's Gareth Evans) made a splash with his ultra low-budget monster movie Monsters in 2010, which he says was intended to be a cross between War of the Worlds and Lost In Translation. While that film was a showcase of what can be achieved on a tiny budget, his second run at a monster movie shows what happens when you bring the sensibility of Monsters to a film with an absolutely massive budget.

Edwards is interested in the human angle in these films, which has led some to describe Godzilla as a misnomer, for a film that primarily focuses on the Brody family, who are bereaved in a tragic accident at a nuclear power plant in 1999. Once we get to the present day, the father of the family, Joe, has become convinced that there's a major cover-up going on about the cause of the accident. When he investigates, he and his son Ford become embroiled in the military's efforts to quell the unexpected return of massive prehistoric creatures, one of whom might just be able to help turn the tide and save the planet. 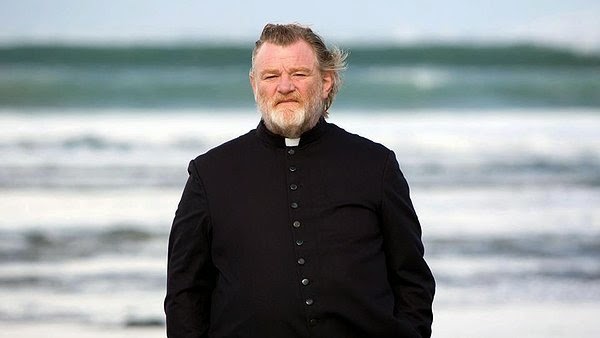 There are a couple of reasons why Hollywood churned out so many Westerns between the 1940s and the early 1960s. Aside from being cheap to produce and easy to market, Westerns could be seen as uniquely American movies, drawing from their own nascent frontier mythology. The genre has since gone into something of a decline since then, (the most notable Westerns of recent years being revisionist genre-splosions like Django Unchained or high-profile failures like Cowboys & Aliens or The Lone Ranger) but are those tropes still uniquely American.

Over the course of two feature films, writer and director John Michael McDonagh has made a convincing case that Ireland is the modern Wild West. But while The Guard was a wry, Western-flavoured parody of buddy cop movies, Calvary comes off as a dark High Noon of the soul. It opens spectacularly, with Catholic priest James Lavelle taking confession from a man who promises to murder him, as an innocent representative of a corrupt church, in seven days' time. Father James knows exactly who his would-be assassin is, but like Marshal Will Kane before him, he finds little solace or support from the parishioners of his small town in his remaining week on Earth. 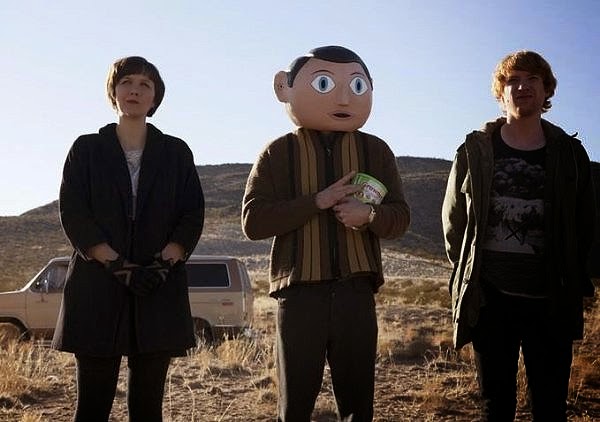 I didn't know a damn thing about Frank Sidebottom before seeing this movie, and many fans of the singer might argue that I still don't. Rather than a straight-up biopic of the singer, director Lenny Abrahamson and writers Peter Straughan and Jon Ronson have made something more fictionalised and tragi-comic, and the result might have been infinitely more annoying in the hands of lesser filmmakers.

In seaside suburbia, we meet Jon, a keyboard player played by Domnhall Gleeson, who is quite comprehensively stumped in his ambitions of creating great music. He's blown away by the arrival of the eclectic band Soronprfbs for a disastrous gig in which he winds up filling in for a suicidal band member, and particularly transfixed by their eccentric frontman Frank, who always wears a giant fibre-glass head to obscure his own face. When they take Jon on the road to help record their new album, he is convinced that the band will become mega-famous, just as soon as he figures out what's going on inside that head (inside that other head) of Frank's. 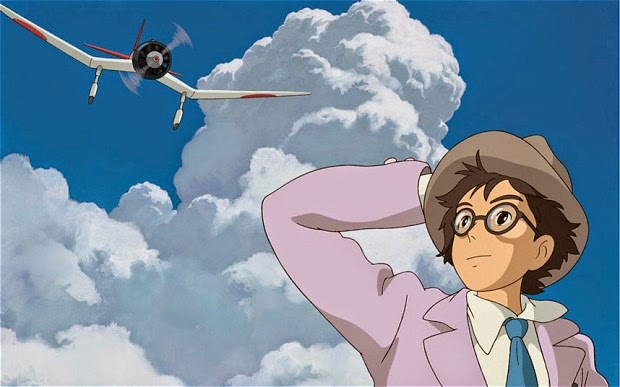 It's been a while since I last reviewed a Ghibli movie, and I still haven't quite made it back to see a dubbed version of a film since the shrill English soundtrack for Ponyo. As a result, I haven't seen The Wind Rises with the English dub, which features the voices of Joseph Gordon-Levitt and Emily Blunt, but I'd recommend it anyway- there's just too much beautiful stuff here for you to be reading subtitles.

Ghibli's stuff transcends language barriers and entertains kids and elder cineastes alike, but Hayao Miyazaki's (apparent) final film as a director is markedly pitched at the latter of them, playing more as a fictionalised historical drama than the flights of fantasy and magic that we associate with his work. Jiro Horikoshi was the chief engineer of various Japanese fighter planes during World War II, and here, Miyazaki explores the personal cost of his life's work as he chases his dream of making a beautiful aircraft. 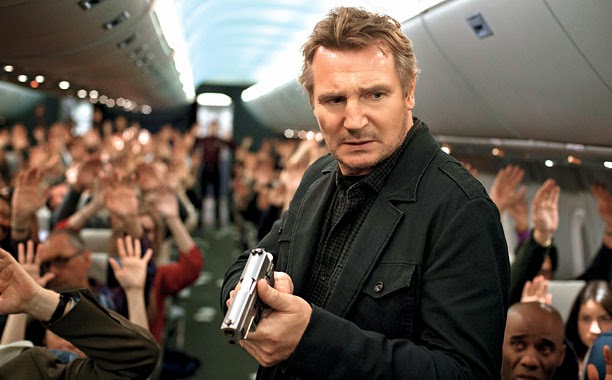 No, it's not February, but I did have a lot on back then, so I didn't deign to write up the suspense thriller Non-Stop at the time of release. Seeing as how it's back in Cineworlds across the UK today as part of their Take Two promotion, now seems as good a time as any to rake over my thoughts about it. After all, you're now in a race against time, for your last chance to see this in cinemas and enjoy the-- oh, forget it.

An federal air marshal who hates flying (and doesn't seem to be a particularly big fan of being in contained situations with people either) sounds just like a character Liam Neeson would play of late. And sure enough, on a red-eye flight from New York to London, his Bill Marks becomes a player in a cat-and-mouse game with a killer who threatens to kill one passenger every 20 minutes unless the authorities pay him a ransom for the plane. Bill has no idea who the threatening text messages are coming from, but he doesn't have long to get to the bottom of it once people start dying mysteriously. 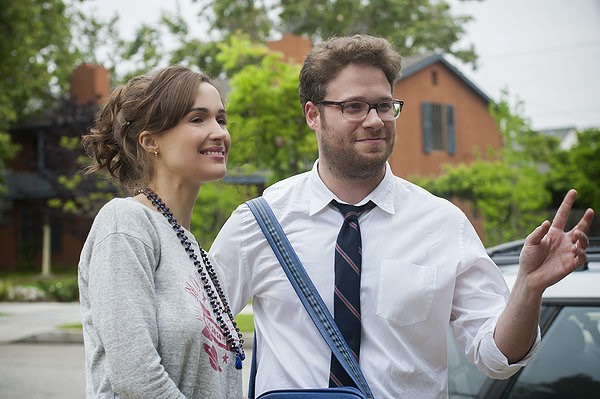 Up until now, director Nicholas Stoller has scored three for three in terms of Apatovian (not a word) comedy movies that don't actually get on my tits. Count 'em- Forgetting Sarah Marshall, its spin-off Get Him To The Greek, and the underrated The Five Year Engagement. Each of them represents a series of rambling skits more than a tight, coherent narrative, but none of them outstay their welcome in the manner of certain Judd Apatow productions.

Now, Stoller has turned his hand to the frathouse comedy, giving the genre a spit-and-polish for 21st century audiences, but it's not the fraternity who take precedence. Bad Neighbours is eager to ensure that our sympathies lie with Mac and Kelly, a couple of young parents who are finding it difficult to make the social sacrifices that their dream suburban life demands of them. When the Delta Psi fraternity, led by charismatic president Teddy, moves in next door, they're eager to be liked by their cool new neighbours, but quickly become embroiled in an escalating feud. 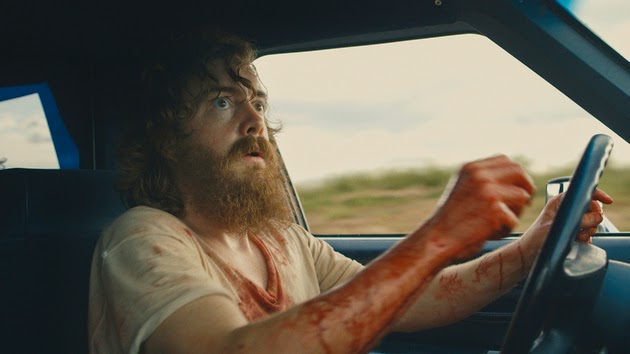 So, these ones are always really fun to review. Just like Locke, Blue Ruin is as good as you've heard, perhaps better, but it's another of those films where the real enjoyment comes from its storytelling, and a refusal to spoon-feed so severe that it's frankly insulting to mention spoons in the same sentence as the movie. While there shall be no spoilers here, the film might be best enjoyed if you just go and watch it now.

For those who'd like a little more to go on, this is a film about Dwight Evans, a man who is first seen as a vagrant, breaking into houses in order to wash himself and scavenging his meals from bins. The bearded outcast gets picked up by a sympathetic cop early on, and told simply that a man called Wade Cleland has been released from prison. The news galvanises Dwight on a terrible mission of vengeance, with tragic and far-reaching consequences.