This is a spoiler-free review- however, I will include plot details from Thor: The Dark World, Iron Man 3 and other films in the Marvel cinematic universe that led up to this one. 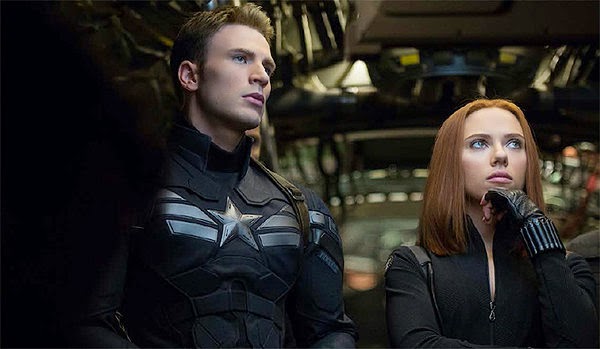 Captain America: The First Avenger was my favourite film of 2011, and one that still holds up to repeat viewings. Joe Johnston's WW2 serial adventure just pushed all my movie buff buttons, and Chris Evans' Steve Rogers- a weak man with a strong moral compass, who is amplified by super-soldier serum rather than simply improved- is probably my favourite of the current screen superheroes.

In my book then, Captain America: The Winter Soldier has a lot to live up to, but I've been looking forward to it all the same. As we saw ever-so-briefly in The Avengers, Steve is experiencing something of a culture shock after a 70-year spell of being cryogenically frozen. He's literally a walking museum piece nowadays. But SHIELD still puts him to use on covert missions, and it's when he starts to question his paymasters that he, Black Widow and Nick Fury wind up on the hit-list of a legendary mercenary known only as the Winter Soldier.

Having been at the cinema for the midnight screening last night, I was lucky enough to catch this as part of a double bill with the first film, and watching the two back-to-back convinced me, more than anything, that The First Avenger may be the best Cap movie we'll ever see. The Winter Soldier isn't an Iron Man 2-style mis-step, but it marks the point where Marvel have finally been able to make something that feels more like the ninth instalment in the Marvel cinematic universe than a Captain America 2. 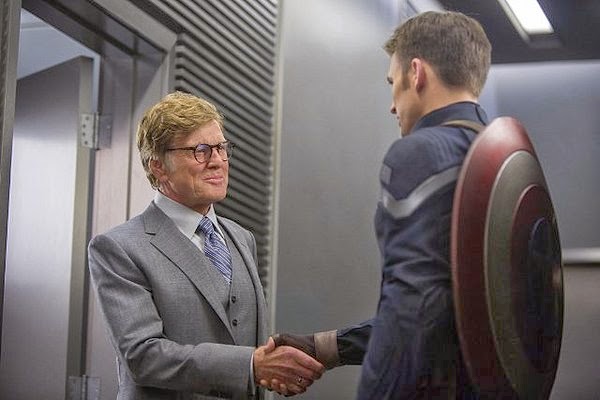 Is that problematic? Well, outside of a few deleted scenes from The Avengers, and a poignant early scene with an old friend here, it feels like a lot of Steve's adjustment to the 21st century has happened off-screen- we haven't had an Austin Powers-style montage of him enumerating his dead friends. ("Ham sandwich.") He also has at least half a team backing him up here too, between Nick Fury, Black Widow and new addition Sam Wilson, (a great supporting part for Anthony Mackie) so it's hardly a solo movie. But it's testament to Marvel's new-found sense of balance, and to Chris Evans' performance, that Cap still feels central to the densely plotted development of Marvel's on-screen mythos.

If this had merely dangled morsels to bottom-feed the patchy TV spin-off Agents of SHIELD, that would have been unforgivable.  But frankly, the broader focus is excusable on the basis that it's a stage for some seismic changes to what we think we know about the movies. Although it back-pedals on some of its early surprises, it's all in service of irrevocably changing the stakes and the state of play for all of these films, past and future, by the time the credits roll. That Cap catalyses that shift feels entirely in-keeping with his character and his values, now that he's been plunged into a world with moral shades of grey.

Directors Joe and Anthony Russo (formerly of You, Me & Dupree, but more importantly, responsible for various action-themed episodes of Community) take to the franchise like ducks to water, immediately differentiating their film from Johnston's retro adventure and even Joss Whedon's ensemble-driven play-fighting. This is a thriller, through and through, and their approach to the action and hand-to-hand combat is-more like The Raid for a 12A audience, than the Indiana Jones-style brawls of before. 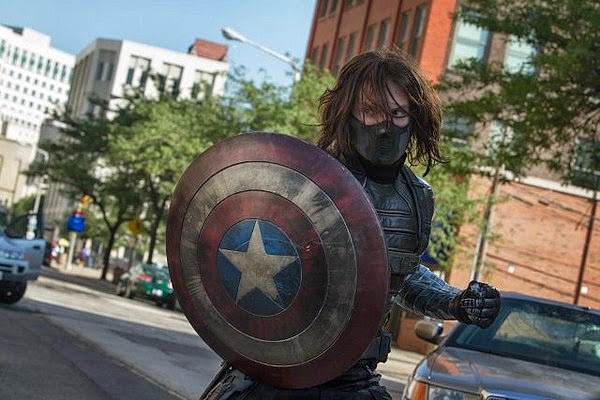 The script, by returning scribes Christopher Markus and Stephen McFeely, ratchets up the paranoia early on, and keeps the surprises coming throughout. The film's best trick is to bring back various characters from The First Avenger where their presence is the least surprising thing about their appearance- they aim to leave you going "Oh WOW, what a poignant/intriguing/fucking BONKERS way to bring that character back." Likewise, Scarlett Johansson, Cobie Smulders and Samuel L. Jackson all get more to do than ever before, as SHIELD is scrutinised more deeply.

The identity of the Winter Soldier is an open secret, seeing as how the film is based on an acclaimed Ed Brubaker run on the Captain America comics, but in playing faithfully to the source material as well as supplementing the plot, the film plays that particular reveal very well. As mentioned though, there are more than a few surprises in store- there's clearly more going on with Robert Redford's character than meets the eye, but if there's a let-down in this film, it's that they don't do what you start to suspect they might do with his character, and the pent-up anticipation leads to a weird sense of disappointment by the time his last scene rolls around. Still, that particular unexplored avenue is left open for Captain America 3.

There's more to talk about, once everybody's seen it and spoilers aren't as much of an issue, but aside from the surprises and the genre recalibration, you could reasonably argue that Marvel's post-Avengers Phase Two of on-screen continuity is feeling a bit same-y so far. Iron Man 3 is still the best of the bunch, and if Thor: The Dark World felt a bit similar to that from a structural point of view, then so does this. All three films find the heroes under attack inside their comfort zone early on, and forced to go off the grid in order to come back stronger. So far, the characters have been different enough to support the sameness, but it does feel like the right time for James Gunn to come along and play around with Marvel's toys in Guardians of the Galaxy. 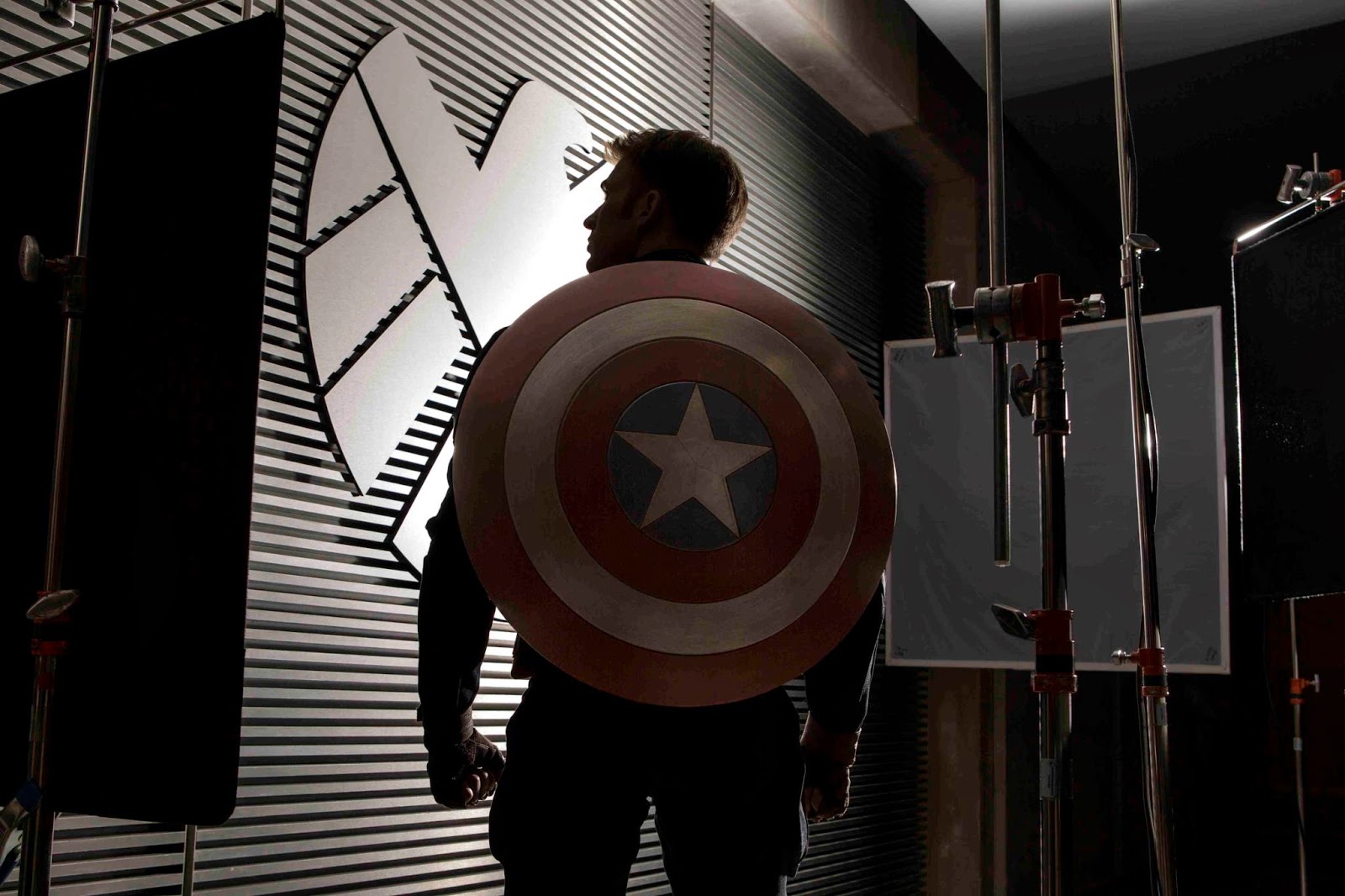 In the run-up to that most obscure film to date, Captain America: The Winter Soldier is another Marvel film that's full of surprises, the biggest of which is that it's a political thriller for 12-year-olds. That's not to say that it's trifling or lightweight- if anything, the balletic and brutal action (which somehow only passes as "moderate violence") and darker tone feels like it's treating kids intelligently rather than leaving them behind in pursuit of the Dark Knight audience. I missed the lighter touch of Cap's first adventure, but without that wartime USP, the Russos manage to break new ground with an engrossing paranoid thriller.