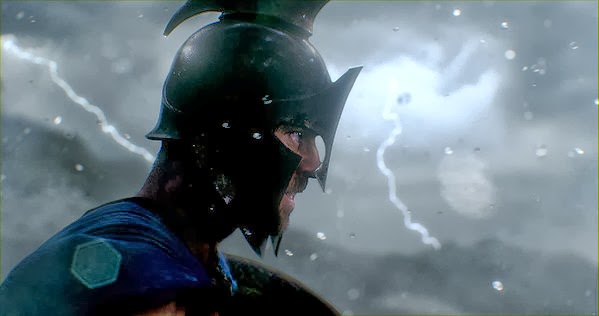 Zack Snyder's 300 launched a thousand internet memes from the instant its first trailer surfaced online, and the film itself went on to become a success with critics and bros alike. Having opted to direct Man Of Steel rather than return for this sequel, Snyder only takes a producer's credit on 300: Rise Of An Empire, while new director Noam Murro does his best to replicate the style that typified the first film, with mixed results.

Taking place before, during, and after the battle at Thermopylae, the sequel shifts focus to what's going on elsewhere in the Greco-Persian war. God-king Xerxes is still out to put down the uppity Greeks, with counsel (and arch-manipulation) from his naval commander, Artemisia. Elsewhere, Athenian commander Themistocles, seeking redemption for an earlier decisive action that exacerbated the conflict, tries to unite the armies of Greece in a coalition against Artemisia and the Persians, and shit gets real all over again.

While Murro gives an outstanding impression of Snyder's style, there's a lack of fulfilment in this one that partly comes from the change-up behind the camera. Snyder's unerring reverence for source material (more effectively seen in his still-underrated version of Watchmen) meant that the film really didn't have to work to be much smarter than Frank Miller's graphic novel, with all of its chest-beating and fetishistic fascism. Murro and co set out with a more high-minded objective, almost contextualising King Leonidas' actions in the first film as more of an act of symbolic martyrdom, than anything actually worthwhile from a military standpoint. 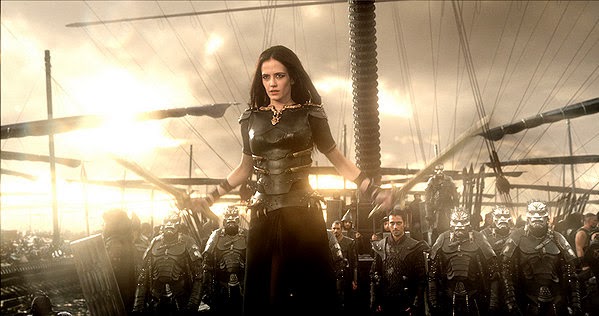 The problem is, the film kind of cops out on that, but then it's tough to make an effective satirical stand on the futility of that 300-man pre-emptive strike, when you're making a film that's just as violent and almost as silly. It even borrows many of the same beats from the first film- a reversal of the father-son dynamic, a sexually charged meeting between military heads, and of course, many violent deaths. This wouldn't be too bad, except the occasional, almost tutted comments about the cost of the war actually undermine the film more than expected. It can't have helped that they apparently used some sort of CGI gravy in place of blood this time around, in the name of giving the film an aesthetic which I'm certain will be just as annoying in its intended 3D.

One of the major things for which I can recommend the film, is that it features a depiction of naval combat that is seldom explored in an action blockbuster of this kind. Given how it's all early warfare, there are opportunities for the creative team to come up with clever tactics and manoeuvres to keep things lively- the first catastrophe that the Persian navy sail into is as close as I can imagine to being the sea-faring equivalent of the squad-car pile-up from The Blues Brothers. Unfortunately, the lack of projectiles also means that we soon get back into the hack-and-slash, a short way into every naval clash.

Without beating around the bush any further though, Eva Green completely dominates the film as Artemisia. Who would have predicted that a sequel which could easily have matched its predecessor for blokey-ness, instead comes up with a rounded and intimidating female adversary like this? Green is better than the material, and spends every second she's on-screen proving it, with a performance that comes off as sexy because it's so scary, and scary because it's so sexy.

She also musters the quotable gravitas of Gerard Butler's Leonidas in one rousing speech near the end of the film, a feat that new leading man Sullivan Stapleton can't match in any of his four or five similar scenes- he comes off more like charisma vaccuum Sam Worthington's Grecian Perseus, in Warner's Clash of the Titans series. With the first 300 having done fantastically well at the box office off the back off its instantly memetic promotional campaign and the subsequent online word of mouth, this second one leaves the more memorable stuff down to Artemisia, once that undercurrent of self-awareness is stomped, stabbed and smashed to death. 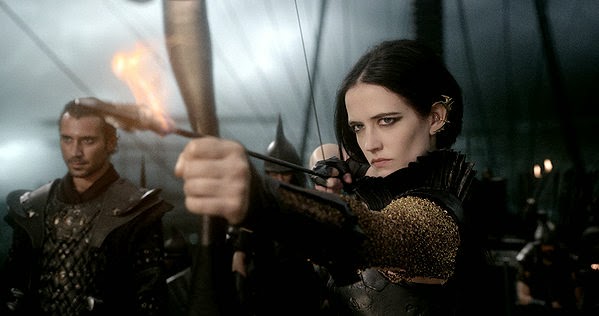 300: Rise Of An Empire makes a considerable effort to ensure that Fall Of An Empire, or an alternatively-titled threequel will follow this in the next few years, and thus finally falls somewhat short of its own impressively lofty ambitions. The prequel/midquel/sequel structure somewhat validates the unlikely follow-up,  along with Green's terrific turn and the naval warfare scenes, but this is less of a deconstruction of macho politics and the futility of war than it promises, and the blood (or gravy) soaked result is less absorbing than it is engulfing and overwhelming.