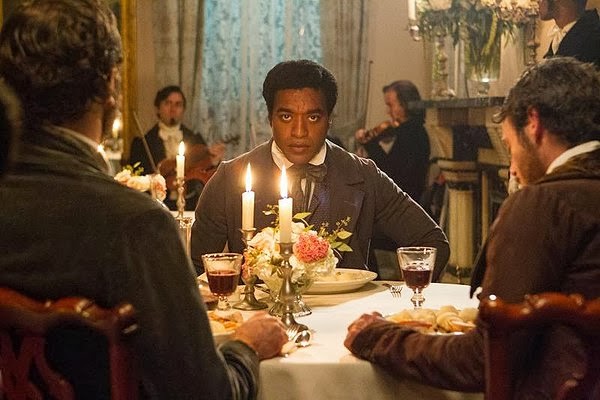 Director Steve McQueen doesn't half pick his subjects. Following in the wake of acclaimed dramas about a hunger protest, and sex addiction, McQueen tackles slavery in pre-Civil War America, with all the cheeriness of his previous efforts, in 12 Years A Slave. Despite receiving a lower 15 certificate than Quentin Tarantino's slave revenge fantasy, Django Unchained, (cert. 18) this is so harrowing as to largely show up the earlier film as something of a cartoon.

Based on the memoir by free man Solomon Northup, the film opens with the violinist being beguiled by a promise of a gig, and then kidnapped and sold off into slavery. Over the course of over a decade, his debt of ownership is passed on between various owners, but is principally carried out under the yoke of the sadistic and santimonious Edwin Epps. Solomon tries beyond reasonable limits to keep his spirit, hoping all the while that he can find a patron, or get word of his plight to his friends and family, and most importantly of all, survive.

I hesitate to say that this film could only have been made by a non-American director, but it's tough to imagine anyone getting to the core of the nation's greatest sin as the British-born McQueen does. Without flinching, he's made a definitive film about the subject, and one which truly matches up to the hype. It's not corny to say that it's a film about hope. Not when it's a film in which Solomon finds no solidarity with either whites or blacks in trying to escape his terrible misfortune, and one in which he must cling to life above even his own moral virtues- most of the film is the process of watching him first become a victim of complicity, and then be enslaved all over again by his need to survive. 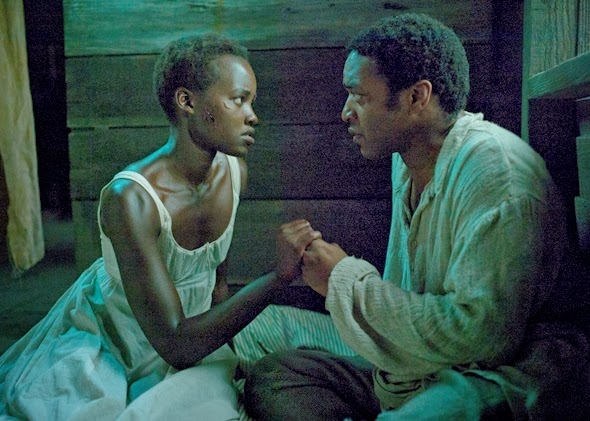 Chiwetel Ejiofor, already one of my favourite actors, is rightly being touted as the frontrunner to win every Best Actor award from here to the Kodak theatre, for his turn as Solomon. It feels very nearly wordless- he is warned early on that he will not prosper for making his learned background known to those who exploit him- but there's a world of sadness and quiet dignity in his eyes, which speaks so much louder than when he tries to reason with his various captors. You always feel for him, and much of the film's power lies in the way Ejiofor brings that to life so hauntingly.

There are also some truly fearless performances by Paul Giamatti, Paul Dano, Benedict Cumberbatch, Sarah Paulson and Michael Fassbender- all playing slavers, overseers and otherwise malevolent white characters. The inarguable standouts amongst these are Cumberbatch, who reaps massive complexity from a slaver whose weak sympathies are tantamount to complicity, and utterly useless to Solomon; and Fassbender, who all but vanishes into the role of Edwin Epps, a formidable, self-proclaimed "nigger breaker", and the most marked contrast from the cartoonish portrayals of Django Unchained.

While Leonardo DiCaprio did a grand job of playing plantation owner Calvin Candie, Epps has none of that Tarantino dialogue, or that ironic ignorance that formed such a huge part of the film's satirical revenge fantasy. There's nothing funny about Epps' zealotry, and Fassbender is truly intimidating, whether actually threatening his "property", or rousing his exhausted slaves from their rest in order to hold daffy dance parties in the middle of the night. He still can't shake his original Irish accent entirely, (see also: X-Men: First Class) but his lapses here seldom break the concentration on his character's presence.

If there's one, potential masterpiece-toppling flaw in the film, it is cinematographer Sean Bobbitt's beautiful work. It's almost a problem that the film looks as good as it does. Even Tarantino, an avowed fanboy of movie violence, hit his man-dingo fight scenes with incurious, disorientating brutality. Though it would be foolish to draw a direct parallel, fine-artist-cum-filmmaker McQueen's most brutal scene, a visceral flogging that is captured in one take, verges on becoming a showboating visual sequence. Unlike the previous shots that have made lingering tracking shots into the director's trademark, I felt it showed little faith in, and -- even worse-- undermined Ejiofor's powerful angst at the new depths to which Solomon has been driven in that scene. 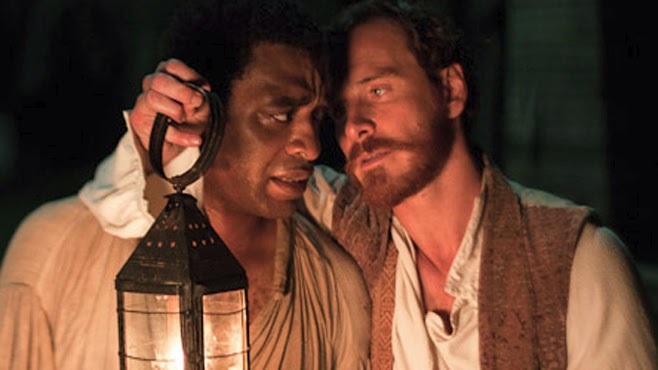 Then again, there's nothing sanitised or glamourised about 12 Years A Slave overall and it would be tough to argue that the subject matter isn't harrowing enough all by itself. There are also tonnes of little understated visual accomplishments in and of themselves, just in the way that certain routine acts of punishment are cruelly and unusually put in the background. But this is an extremely potent film that is never more potent than when it's focusing on Ejiofor, who brings the perfect audience conduit to life in an entirely truthful and un-cynical manner, and stands firm in the centre of a staggering dramatic achievement.