THE KINGS OF SUMMER- Review 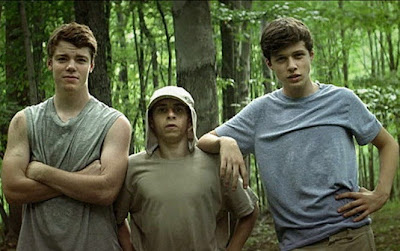 Although it means my viewing and reviewing have been skewed towards one particular sub-genre for the last fortnight or so, I highly recommend checking out the same triple bill of coming-of-age movies as I have, in order to cast off from the summer of 2013 and buffer between loud thump-y actioners and the worthy awards season pieces to come. It goes Mud, The Way Way Back, then The Kings of Summer.

In contrast to the heroes of the other two films, Joe Toy lives in a state of emotional warfare with his widowed father, and yearns to be free of his control. Joe's best friend, Patrick, has overbearingly affectionate and embarrassing parents, and harbours similar ambitions. Together with another kid, Biaggio, they run away to the woods and vow to live free of responsibility. They build a house, scavenge for food, and generally get on quite well, considering that they're three dipshit teenagers, fending for themselves.

Of the three coming-of-age films I've seen in the last week, this is the most overtly comedic. It's not to say that it's necessarily the funniest, (I remember laughing a lot in The Way Way Back too) but the stakes feel markedly less serious here than elsewhere. The teens are seldom in any real danger, and there's nothing truly miserable about any of their respective home situations. In fact, the film pretty much shows that Joe runs away from home because he can't handle Nick Offerman's craic, (more on which later.)

While the kids aren't stupid, or even close to being unintelligent, there's always that sense that this is only an idea that frustrated teenagers could really countenance, especially as their reasons for running away from home aren't especially important. The three of them vow to live in brotherhood in their reasonably spiffy treehouse, and eating only what they have killed for themselves- the latter of these promises goes out of the window just as soon as Joe discovers that their hideaway is within walking distance of a restaurant, and the former can only be doomed to failure. 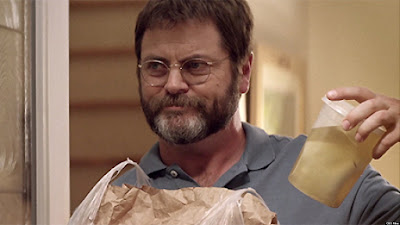 Instead, writer Chris Galletta's début script does a terrific job of exploring the depths of essentially harmless embarrassment that teenagers can experience at the hands of their parents. At least for Patrick, who is lumbered with a set of uncannily un-savvy parents, (hilariously played by Marc Evan Jackson and Megan Mullally) it doesn't seem to be deliberate. Between Joe and his dad, Frank, it's far more passive aggressive- Frank prices Joe out of a family game of Monopoly, and Joe responds by hoax-calling the cops to their house.

Nick Offerman hasn't been so prominently featured in a film that I've reviewed before now, so I'm seizing the opportunity to sing his praises here- the man is the most cuddly and yet most scary looking comedy performer working today. Equipped with deadly comic timing and a frown that can turn you to stone at ten paces, Offerman makes for a brilliantly grumpy old bastard. When the film cuts away from the boys, to show how Frank is coping with being on his own, it doesn't feel like a detour to break up the coming-of-age foolishness as a welcome check-in with that character, and Offerman's performance is one of my favourite parts of the film.

Another comes in the form of Biaggio. All you really need to know about him is that when the boys go missing, Joe and Patrick are reported as missing, and a search is launched. On the other hand, nobody seems to mind that Biaggio is gone- he's a weird little free spirit of a guy, who behaves just as randomly as he arrives in the other two's plans, dropping brilliant Brick Tamland-style one-liners just about every time he's on screen. Moises Arias threatens to steal the show on several occasions, but his chemistry with Nick Robinson and Gabriel Basso as Joe and Patrick is a big part of the film's appeal. It's also funny to see how Joe unwittingly starts to turn into Frank, while he's away from him- this is exactly the fate he was trying to avoid.

As surreal as Biaggio can be, the film is hardly unconventional. Wes Anderson's Moonrise Kingdom covered this ground in more heightened terms, with younger, cuter "beige lunatics" as lead characters. Director Jordan Vogt-Roberts isn't occupied by the idiosyncrasies of an Anderson either, so it's a fairly straightforward film in terms of aesthetic. The film is arguably at its most cinematic when it goes into montages, and there are a fair few to be had. Still, that's all in keeping with the notion that this isn't as big a story as our leads think it is. 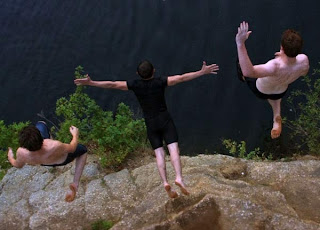 The Kings of Summer is as good a film as I can imagine for seeing off the summer- less optimistic than The Way Way Back and more grounded than Mud, but worthy of being mentioned in the same sentence as either or both. If I've repeated myself in the last fortnight or so, it's only because these are all great films, cleverly scripted and beautifully performed, that happen to cover similar ground in terms of tone. Even if this falls somewhere between the two, it's a very funny teen comedy that should get the audience it deserves in summers to come.

I'm Mark the mad prophet, and until next time, don't watch anything I wouldn't watch.
Posted by Mark at 11:30