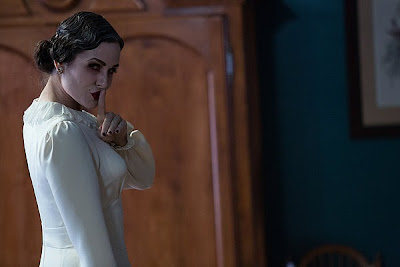 Have horror sequels ever made the story their first duty, once they get past the first instalment? Certainly, the modern genre franchises don't seem to pay much mind to what could be gained from continuing the story. The Saw movies became a gore-soaked soap opera, but the imaginative setpieces always received greater consideration. Paranormal Activity has a fledgling mythology within its helter-skelter continuity, but those films seem more focused on getting the most out of their increasingly familiar format.

In their sequel to 2011's Insidious, James Wan and Leigh Whannell have made a bloody good go of subverting that sense of sequel decay, by going further into the Further, to expand and even improve upon the original. Insidious: Chapter 2 is plainly a continuation from where we left off- Josh and Renai's young son Dalton has been revived from his supernatural coma, but Josh hasn't returned to his own body. There's a malevolent presence there instead, and Josh's nearest and dearest are left scrambling to unpick the mystery behind the family's affinity with ghosts and demons.

The sequel advance-screened in cinemas nationwide, one day ahead of its official release last Friday, as part of a double feature with the original. Watching Insidious: Chapter 2 in isolation, it occurs to me that this is the most ideal way to see it- the sequel assumes that you're completely up-to-speed, with little concession made to any stragglers. This is unusual enough for a horror sequel. Increasingly, this kind of film will have a couple of returning characters, at most, and will usually recycle certain popular beats and gags that have gone before. 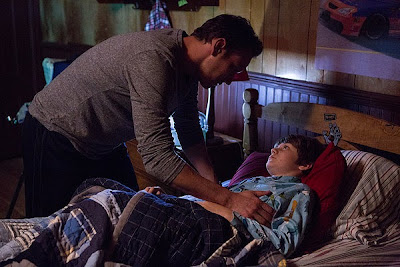 While the first film looked like A Nightmare On Elm Street, by way of Poltergeist, the sequel is reminiscent oftonnes of different horror films all at once, from Psycho to last year's The Woman In Black. As I noted in my review of The Conjuring, Wan's recent success as a horror director seems to have come from memorably executing familiar stories. Some have speculated that these films benefit from a lack of horror genre literacy on the part of the young audience, but there are definitely pleasures for those who are clued in, even when the rollicking, multi-faceted climax simultaneously borrows from Psycho, The Shining and Poltergeist.

I tend to recommend horror films that have entertained me, even if I don't necessarily find them scary, but I draw the line at horror films that just aren't interesting. This one interestingly pursues its own mythology throughout. It doesn't have any uneventful scenes, constantly either driving itself forward, or else making sense of certain developments from the previous instalment. In terms of repeated memes, the film only really gives into the temptation to once again have Rose Byrne, with her wide eyes and terrified expression, being spooked in broad daylight.

As fun as that is to watch, it's a real shame that Byrne doesn't get much else to do this time around. She's one of the best, most likeable actresses working in horror right now, but Patrick Wilson gets the most to do. Like the film, he gets better as he goes along, starting out flat and disengaged before escalating his possessed performance into the Jack Torrance zone, and maybe a couple of notches crazier too. The major weakness of Whannell's script is the dialogue, ("Pain. I've missed this. But not as much as inflicting it on others!") but the calibre of the cast once again sets this one apart from the pack.

Joseph Bishara's distinctively screechy, strings-led score is back with a vengeance too, but it's fair to say that there's not a lot in this that you haven't seen in either the first film or other horror flicks, save for some neat subversions of early scares. Let's just say that with Josh trapped in the same realm as the more dickish spirits, perhaps not every paranormal occurrence is malevolent. The character design is a little more pared down than in Insidious too- the pale-faced woman in the black veil is the Big Bad this time around, as opposed to a Darth Maul lookalike- but that doesn't preclude any spooky moments. 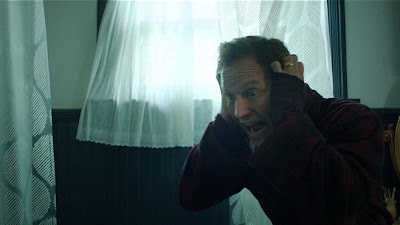 Insidious Chapter 2 is unoriginal, but also unexpected- an unabashedly mainstream horror film that is densely and meticulously plotted, instead of marking vast, uneventful periods of time between setpieces. It occasionally feels televisual- I submit that there's enough plot in the two movies we've seen so far for two short seasons of a TV series, and neither does it lean on surround-sound jolts for its scares. It's well performed, well plotted (if not always well written) and well worth a look, especially if you enjoyed the first one for its riotous ghost train atmosphere.