This review contains mild spoilers for About Time, but only if you haven't seen the trailer that's been playing in cinemas; even then, the trailer is not hugely representative of the film. 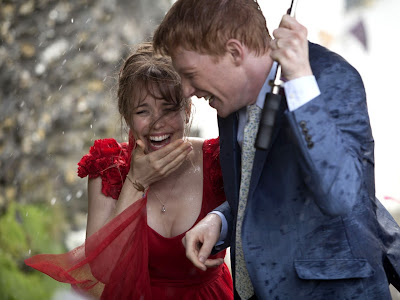 Fitting neatly with its own timey-wimey structure, About Time occasionally feels like a novel that hasn't been written yet. It has the structure of something that is unerringly faithful to a less cinematic source, but it comes from an original idea by writer-director Richard Curtis. Admittedly, Curtis makes slightly self-indulgent films, but this one is a curious case indeed.

As you'll have seen in the trailer, Domhnall Gleeson plays Tim, a young man who lives with his loving family in a gorgeous house in Cornwall. As he approaches adulthood, he finds himself frustrated by his lack of romantic prospects, but gets a shot in the arm when he turns 21, and his father lets him in on a secret. The male line of their family has the ability to travel back in time, at will, to any moment in their own lifetime. Tim decides that he must only use this power for good, and to get a girlfriend. The rest unfolds a little unlike what you've seen in the trailers.

Sure, Tim meets Mary, played by the always-radiant Rachel McAdams, and has a timey-wimey mishap where he ends up not having met her. Contrary to the way that it plays out in the trailer, however, this happens right after their first date, rather than after they've built a life together. It's safe to say that the film is fairly spoiler-proof because its plot never strives for such high stakes- it's one of those time travel films in which time travel is almost always the solution for the lead character, instead of being the problem.

Look at the Back to the Future trilogy- Part II is the weakest of the three because, although it's still a good film, the DeLorean is always working. It gets Marty and Doc into some scrapes, but then it gets them out too. In the other two films, they're in such trouble with time travel precisely because they can't time travel. By contrast, when Tim has a mishap, he's always able to rush back and have another go. In fact, one of the most stirring moments of About Time comes when Tim spends a month waiting to meet Mary- he can only travel to the future at the same pace as everyone does, and his willingness to spend time on the slow path for her really sells the romance. 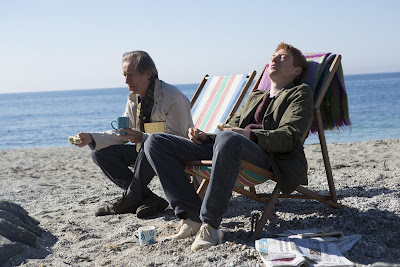 Unfortunately, it feels like Curtis was, uncharacteristically, disinterested in the romantic side of things. After they initially get together, there's a lot more of the film left, and Mary doesn't get a whole lot to do. McAdams and Gleeson have lovely chemistry, but the film becomes much more about the relatives, than about the new family. Bill Nighy and Lindsay Duncan are delightful as Tim's parents, sure, but it feels almost like they keep Mary out of the way to avoid comparisons between this and McAdams' roles in The Time Traveler's Wife and Midnight In Paris.

This is the first time I've really experienced this feeling with a misleading trailer, but I would much rather have seen the film that was advertised. Still, there are virtues in this approach. In 2010, Curtis wrote Vincent and the Doctor, an episode of Doctor Who in which the monster-of-the-week was secondary to Vincent Van Gogh's deep-seated depression, although having an invisible monster coming after him was a clever touch. That episode's emotional climax found Matt Smith's Doctor using time travel compassionately, to shine just a little bit of light into Van Gogh's tortured existence, and even had Bill Nighy's art curator on hand to make him feel better. The same compassion extends through About Time.

Even if he initially sets out to find a girlfriend, Tim increasingly uses his time-hopping capabilities to make other people's lives better. Whether it's giving a New Year's kiss to a shy young woman, or helping Tom Hollander's foul-mouthed playwright to have a successful opening night, the film doesn't skimp on the apparent reward of helping others- it usually makes life more difficult for Tim. It's an interesting angle to take, and it makes the film more of a light romantic drama than the romcom that some might have expected. There are funny moments, and the same recognisable character types who recur in Curtis' movies, but it's perhaps a little more moving than anticipated.

Because it's really quite a long movie- I caught a glimpse of the time around 90 minutes in, and the ending is still nowhere in sight- it feels quite languorous, even if it's never boring. The real sign that Curtis manages to pull it off is that I went from feeling restless, to being close to the verge of tears quite quickly, once the ending did roll around. And in that much alone, the film speaks volumes- about his manifold skills as a writer, and about his utter lack of discipline as a director. If he's done directing, as recent interviews have suggested, then I'm looking forward to seeing someone else direct his next script. 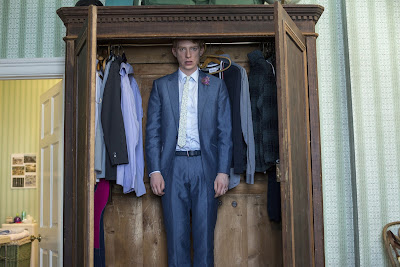 About Time is about as light as expected, but it also benefits from being a little more thoughtful and a little less twee at the same time. It's unmistakably a Richard Curtis film, with leading man Domnhall Gleeson treading a winsome path in Hugh Grant's shoes, but it also criminally underuses Rachel McAdams, and generally fails to step up for a second-act subplot, in which Tim's sister might have found it useful if the women in the family had the same gifts. The material might have been better suited to a novel, but the film leaves a feeling that's at least as warm and fuzzy as it is nonplussed.