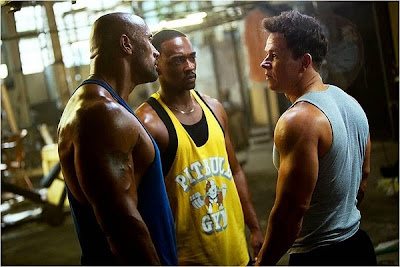 I have previously held that Michael Bay is the Devil. While Pain & Gain did not leave me unconvinced of this assertion, the film goes to show that any hack director who takes a lower budget than they're used to, and uses the money to make a film for grown-ups, can make something far more interesting than they usually churn out. At the same time, it's a film that is unerringly faithful to Bay's own directorial style, but then we can't ask for miracles, can we?

Based on the true events that transpired around LA's Sun Gym in the mid-1990s, Daniel Lugo is a bodybuilder and personal trainer who's satisfied with his body, but significantly less happy with his lot in life. As he sees it, life's losers are stepping on his neck for a profit, and with some unwitting encouragement from a self-help seminar, he rounds up two other thugs from his gym to kidnap, torture and extort from the rich, starting with one unfortunate client who could grant him a fortune.

The film's marketing has insisted upon the truthiness of this story, and even halfway through the film, Bay gives checks your disbelief is still dangling with a cheeky reminder that "This is still a true story". Your mileage on Pain & Gain will vary, based entirely on the fact that this adaptation is mostly a load of horseapples. The comparisons between the reality and the fiction are well-documented, so I won't retread them here.

The thing is, Michael Bay is a misanthrope- the guy just doesn't like people. Until this one, that had never been more clearly demonstrated than in his Transformers films. Pain & Gain was supposed to be his smaller project between the second and third instalments of that series, but has instead been made by the grace of a two-picture deal with Paramount, which includes Transformers 4. That's right, Bay is so passionate about this project, a scathing look at the self-entitled and selfish scum of humanity, that he signed on for another awful Transformers movie. I mean, the money probably helped too, but yeah, this is a passion project. 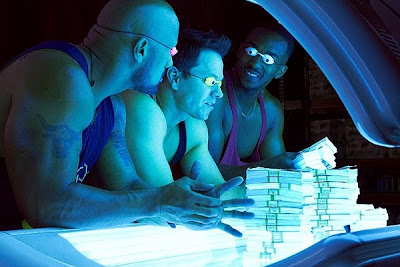 Bay and his stars, Mark Wahlberg and Dwayne Johnson, took pay cuts on this one, and it has turned out like the kind of film you take pay cuts to make. Lugo and his gang are despicable and violent, but in Bay's adaptation, they're also deluded and stupid. Some will say that this trivialises the evils of some really heinous people, but as a markedly different crime movie, in which the masterminds are total idiots, it's more enjoyably trivial than anything he's given us before.

Virtually every character in the film is unlikeable, but crucially, they're far from unwatchable. Bay utilises multiple voiceovers throughout the film; a technique that should come off as jarring, but instead serves to flesh out the depth of several characters' depravity. It might be telling us stuff, rather than showing us, but the monologues do work. Wahlberg makes for a particularly hopeless shitbag, and I'm only disappointed that Den of Geek's Matt Edwards has already coined a perfect description of Johnson's performance- "a mad concoction of contradictions, compressed into the middle of three hundred pounds of terrifying bastard." I couldn't possibly put it better if I tried.

Still, as much as we're meant to hate that we're enjoying it, we're not allowed to lose hope. Ed Harris gives a brilliant turn as the only character who's even slightly compassionate and human, a retired cop who now works as a private investigator. More than just being a good guy, he seems far tougher than the roided-up lunatics around whom the film revolves, and that's as it should be- he's smarter than the other characters, and it's most surprising to see a Michael Bay film that prizes smarts over strength.

Granted, it's still a Michael Bay film. Cue comedic supporting turns from Rebel Wilson as a therapist who fetishises over Anthony Mackie's character's steroid-shrivelled genitals and Ken Jeong as a self-help speaker who never existed in the real-life version of events. There are also jokes at the expense of dwarves and gay people, and a dopey, leering contempt for anything boobed and bikini-clad. The Transformers films never worked because I always suspected Bay was doing all of this stuff on purpose. Paradoxically, this one works because it's calculated nastiness. 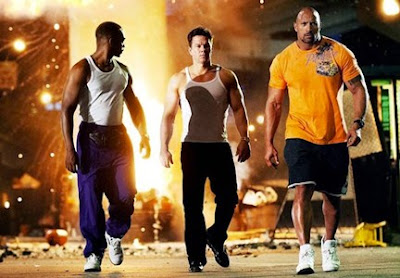 Pain & Gain is one of the best films that Michael Bay has ever made. That only means it would grade around 6/10, at the most, but it's also one of the least audience-friendly films we've seen all summer. Bay takes some objectionable liberties with the depiction of some pretty grisly and harrowing real-life events, but it's downright nasty stuff, with some wickedly funny moments. It rambles a little in the middle of its two hour running time, but it's ultimately a film that lambasts self-entitlement and punishes stupidity, and that's a good thing. Let's hope that Transformers 4 was worth it.