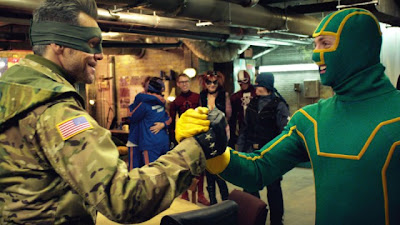 The first Kick-Ass was a pretty extraordinary accomplishment of independent filmmaking, produced before anyone could say "You can't do that!" and presented, fait accompli, for distribution. It was met with widespread acclaim, and quite right too- it's a film that was out to shock and affront conventional superhero movie norms, but still had an essentially good natured centre.

Kick-Ass 2, at this point in the summer, should serve as a palate cleanser from uber-serious comic book movies like Man Of Steel and The Wolverine. Dave Lizewski has hung up the wetsuit for the time being, but discovers that Kick-Ass has inspired a number of others to don costumes and fight the good fight. Spurred on by boredom, Dave decides to take his superhero career more seriously, and enlists Hit-Girl to train him up, but she's trying to buckle down and act like a normal teenage girl. Elsewhere, Chris D'Amico is inspired to counter the rise of the world's first superheroes, by becoming the world's first supervillain.

I largely enjoyed this one, but I struggle to credit the opinion that it's better than the first one. It's certainly more slick, and it feels like a worthwhile continuation of the story set up in the first one, but it also feels like there's a lot missing. While it retreads certain structural beats from the first film, there's nothing as exciting as Hit-Girl's assault on a hallway of thugs, or as funny as Dave and Chris sitting in a sports car and dancing to Gnarls Barkley. I saw the film with my brother, and the repeated line that made him laugh the most, "You killed my dad with a bazooka", simply refers back to something that happened in Kick-Ass. 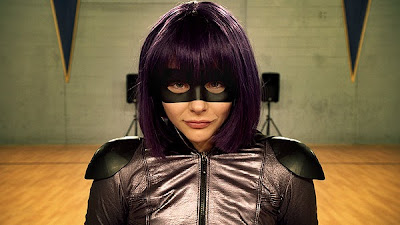 Part of the difference in style is down to a new writer-director, after Matthew Vaughn took the producer's seat instead. Jeff Wadlow's past credits wouldn't immediately suggest that he's suitable for this material, but the adapted script was apparently all his, and he does bring some neat new tricks to the table. For instance, there's much more action in this one than in the first film, and Wadlow adds a cool first-person device to some of the more punishing fights- the focus blurs and the camera lurches, and it's a really effective way of engaging in the process of Kick-Ass (usually) getting his ass kicked.

But outside of the visuals, it feels like his script struggles to temper some of comic author Mark Millar's more gratuitously awful impulses as well as Vaughn and his writing partner Jane Goldman did. Instead of adapting in a different direction, Wadlow takes two particularly horrific scenes featuring Christopher Mintz-Plasse's Chris/Motherfucker right up to the brink of what happened on the page, and then having him chicken out with a couple of funny lines. Admittedly, both instances made me laugh, but the film doesn't always land right in that sweet zone between arbiting Millar's derangement for the big screen, and a more homogenised and tame version, and occasionally errs a little too close to one or the other.

I also felt that Wadlow's script misses a couple of open goals, story-wise. In also integrating the plot of the Hit-Girl comic series with the film, Chloe Grace Moretz continues to play a role. Mindy's promised her adoptive dad, a cop, that she'll stop being Hit-Girl and go to high school, and winds up becoming embroiled in a sub-Mean Girls feud. Although Moretz nails the character again, there are two problems with this. Firstly, that it never feels like anything other than practice for the Carrie remake she's starring in this year. Second, Mindy's sub-plot never entirely integrated, and comes up only in interludes from the main plot. And, if you want to add a third, there's an entirely misjudged scene about girl-urges that never should've made it on screen- a perfect storm of cringe-making product placement for Union J, and pure "ick". 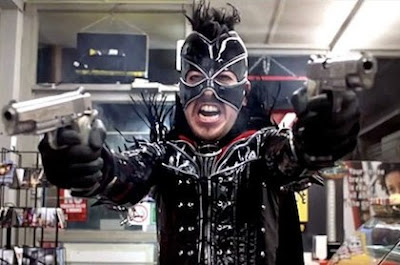 The character who has the most enjoyable plot going on is the Motherfucker, nee. Red Mist, nee. Chris, played by Christopher Mintz-Plasse. Fulfilling the promise at the end of the first film, Chris is doing everything within his power to become a supervillain, but the hilarity comes from how little power he really has, as a spoilt weakling with none of the smarts to actually carry out any of his plans. Mintz-Plasse gets most of the funniest moments in the film, and as he builds a team of villains, including the scene-stealing Mother Russia, you actually find yourself missing him when he's not on-screen.

This was an issue that some had with the first Kick-Ass film- once Big Daddy and Hit-Girl appear, they steal the show from Aaron Taylor-Johnson's title character. The sequel only exacerbates this problem by surrounding Dave with other costumed heroes and villains. While Jim Carrey's Lieutenant Stars 'N' Stripes is underplayed and yet disappointingly underused, Donald Faison and Clark Duke give hugely enjoyable performances as quixiotic dorks who join Justice Forever to follow Kick-Ass' example. Remember Tommy, a husband-and-wife team who vow to help people after losing their son, are also very well conceived, and are sadly as close as the film comes to recapturing the essential good nature of its predecessor.

The comedy waxes and wanes the longer the film goes on, because as much as it doesn't take itself seriously, the film ultimately has to take the characters slightly more seriously in order to advance the drama. It all culminates in a pretty terrific battle royale between the heroes and the villains, which surpasses some obvious budget constrictions to become one of the better finales to a film this summer. It's more trashy and exploitative than the first film, but as mentioned, it holds back on certain excesses. 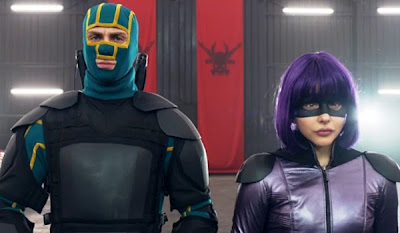 Kick-Ass 2 comes across Troma-lite, which feels like a decent tone for the series to strike as it goes forward. Films like James Gunn's Super have demonstrated that you can expel guts and gore all over without losing heart, but to some, this one feels like it has neither enough heart, nor enough excess. For the most part, it's an entertaining follow-up to the first film, and this series is better than most at immediately earning a continuation by the time the credits roll. It's definitely not better than the first one, but it's not too much worse either.