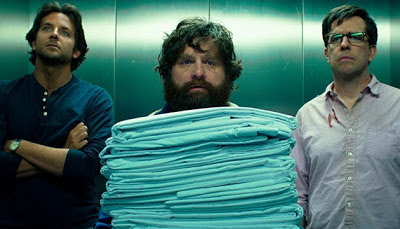 I only laughed twice, while watching this movie. The first of those laughs came after a long spell of thinking I'd puzzled out how Mike Tyson was going to reappear, and I laughed more out of relief than anything else; Tyson isn't in the film, thank fuck. The second came in the end-credits stinger, which practically means I laughed after the film was over. Still, it's cool because it seems like Todd Phillips decided we weren't meant to laugh this time around.

Still, that's not the only aspect that's been discarded from the first two films. The Hangover Part III doesn't begin with one of the characters getting married, but with the Wolfpack being enlisted to take their spoilt man-child and founding member, Alan, to a mental institution in Arizona. There's no night of drunken bad behaviour, but there's a bunch of Porky Pig-masked drug dealers, led by the imperious Marshall, who side-swipe the gang en route and force them to track down Mr. Chow, the Chinese gangster who keeps running into them.

While Part II took the same winning formula that made the first film such a surprise hit, and bleached out all of the good stuff with its intense sequel syndrome, Part III goes even more intense, more offensive and less funny. It should go without saying that the first film is by far the best in the series, but people might not be prepared for just how dark and nasty this one gets, or for how it takes itself so seriously. The marketing has promised an "epic conclusion", in such a way that we'd all assumed was mocking the marketing for Harry Potter and the Deathly Hallows Part II and The Dark Knight Rises, but in retrospect, it almost feels like a mission statement. 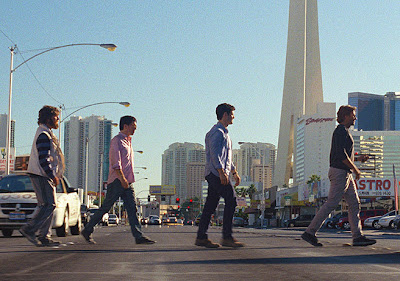 And so, Part III takes it upon itself to wind down, as all parties must, rather than leave us laughing. This wouldn't necessarily be a problem, if we cared about the characters. Aside from how unlikeable Bradley Cooper's Phil has become by the beginning of this one, and the way in which Ed Helms is squandered on simply screaming at whatever other characters are doing, the first film worked so well because it was built around a mystery plot. Granted, the chemistry between the leads was enjoyable too, but the overall tone was fun and interesting- it doesn't follow that we should then want to see the characters when they start acting like dickbags.

That's especially true of Zach Galifianakis, whose Alan has gone from being a sweet-natured but mildly dangerous man-child, to being entitled and mean on top of that. With this film as proof if proof were needed, Phillips seems to have gotten the top of Hollywood comedy by being as misanthropic as Michael Bay was, in his ascent(?) through action blockbusters. The film is so misjudged that the unexpectedly enjoyable stuff looks entirely accidental. The foregrounding of Ken Jeong's Chow really, really shouldn't work, and if you've always been annoyed by him, then it defintely won't, but hell, at least Jeong gives 100% to the role. He's the only one who really seems glad to be here.

On the plus side, the film looks terrific. Lawrence Sher's cinematography is great, and even if the major comic action setpieces aren't particularly funny, their sheer scale is admirable and ambitious. Ultimately, it's too much of a problem that the script, co-written by Phillips and Part II writer Craig Mazin, can't find funny moments in the more low-key and intimate scenes between the Wolfpack. They're trying to shock us into laughing, but at least it's preferable when they're trying to bowl us over with spectacle, rather than gross-out jokes and animal cruelty. The latter is particularly troublesome here- at one point, Chow kills a couple of unconscious guard dogs. This isn't even pitched as a joke, we're just told about it, matter-of-factly, at a point when it has no bearing on the plot. Don't worry though, there's plenty of on-screen violence towards animals. 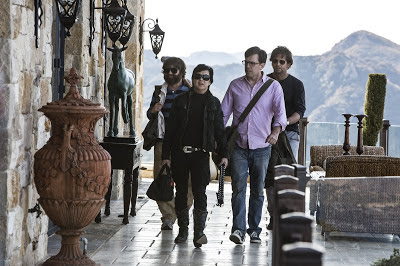 The Hangover Part III isn't a film you're meant to like. It's almost as if Todd Phillips is quietly furious that the first one is so popular. In 2011, he gave us a retread of the first film that got panned, and still made a whole lot of money. And in between those films, he made the comparatively unpopular Due Date, one of the only films in recent years in which Robert Downey Jr is unlikeable. This third instalment has a confrontational air about it- "You want something different? Fuck it, here you go." Although the scale of the epic conclusion is occasionally impressive, comedy filmmakers can make (and have made) better, funnier and more watchable films with far less.

I'm Mark the mad prophet, and until next time, don't watch anything I wouldn't watch.
Posted by Mark at 17:00

Zach is always so much fun to watch on screen.