There are few franchises that get to six films and keep being interesting, even if most of us would have to admit that the change in creative direction behind the Fast & Furious movies is far more fascinating than the end result. Since his first film for the series, 2006's Tokyo Drift, director Justin Lin has been working on the one thing that none of us could have anticipated from this particular series- an arcing storyline. And in Fast & Furious 6, the endgame is in sight.

Having retired on the earnings of their successful heist in the previous film, Dominic Toretto's motley crew of expert drivers live lives of luxury, dodging extradition to the US. Meanwhile, agent Luke Hobbs is trying to run down a team of equally talented drivers, who've left a trail of destruction across Europe as they try to assemble a powerful technological weapon. Hobbs recruits Dom, and his crew, by showing him evidence that the late Letty is actually still alive, and collaborating with the villains, and a smashy battle of wits is set in motion.

There's a joke in one of the early American Dad episodes, about how currently racing-obsessed Francine must have seen The Fast & The Furious, if she's watching 2 Fast 2 Furious on TV- "how else could you follow such a cerebral storyline?" Over the course of Lin's four entries to the series, we've found out that the third instalment actually takes place after this sixth one, a character thought dead in part four is actually alive, and that there's even a Big Bad in this arc. I could never call it cerebral, but at least Lin has a vision here. 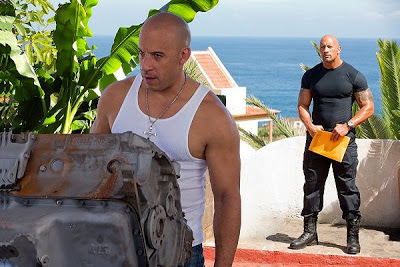 By this point in the series, he's completely switched gears- as in the previous film, there's only a single street race scene to appease those fans who are faithful to the original premise, whoever they may be. To the studio, this is simply the removal of a ceiling on audience numbers, but believe it or not, the series has actually evolved, slowly. Here's the first film in the series in which the women get involved in the action as much as the men, with Michelle Rodriguez and Gina Carano kicking arse throughout. Still, they're mostly kicking each other's arses, (girl fight!) and the series' de facto leading lady, Jordana Brewster, is relegated to stay-at-home mum status.

The involvement of Carano also points to Lin trying to position the series at the forefront of action cinema, even if it cribs from more imaginative, less bombastic films to do so. As well as roping in the Haywire actress and The Raid's Joe Taslim for some hand-to-hand dust-ups, there's the same fidelity to practical stunts and effects work that has distinguished his take on the series from the first two films, both of which now seem orphaned from the rest of the series.

There's also the usually enjoyable disdain for physics and common sense, as first seen in the six-minute freeway confrontation that has been kind of ruined by previews in Cineworld Cinemas for the last month or so, and a finale that takes place on the world's longest runway- the point where I realised that the sequence must be taking place on a 20 mile stretch just added to the silly enjoyment. Still, this is all just my thoughtful way of saying that while there's some interesting stuff here, it remains the sixth Fast & Furious film, and that there's nothing wrong with dumb fun, if it's not pretentious or offensive.

The consistent reminders that our heroes are like family start to catch in your throat as the film rams them down, because they're still essentially heist movie ciphers, no more developed than in previous instalments. I guess Paul Walker's Brian is a dad at this point, but by now, you must realise he's gone from being the protagonist to being the token white boy, in a rare blockbuster franchise that has embraced racial diversity. There's the sense that they're keeping him around because... (sigh) he's family, while we get to watch Vin Diesel and Dwayne Johnson do most of the heavy lifting. 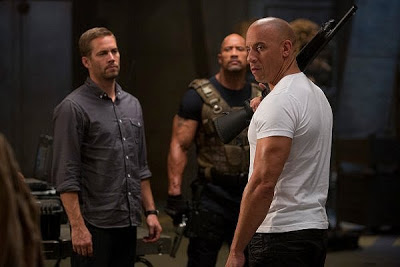 It's not saying much, to call Fast & Furious 6 the best in the franchise, but it is at least a more enjoyable high (middling) watermark for the series than the somewhat overrated Fast & Furious 5. Once again, it's way too long- I'm not sure why a series that has the word "Fast" in its title is so poor when it comes to brevity- and the camaraderie of the cast isn't enough to sustain the quieter scenes, but Lin remains an imaginative director of action, who will be sorely missed as the series wraps up his own arc without him, next summer.

Yeah, the 'runway thing'... At least in 'Speed' they had the decency to drive in a slight curve and refer to "circling the runway"!

This one was in danger of being too silly, but since it is almost knowingly silly, I cut it a lot of slack - Hudson Hawk is a huge favourite of mine, and this seems to be the direction they're going!

The London setting felt claustrophobic for me, I think because I don't want to see my Los Angelinos slumming it under a miserable grey sky.

And did I mention that I fell asleep? Fear not, I will certainly watch this at the cinema again, it is the best movie I've fallen asleep through all year (and that includes Die Hard Five and Star Trek 2)!

The watch Furious 7 just come out in this year 2015 and paul walker performing last time in this movie.