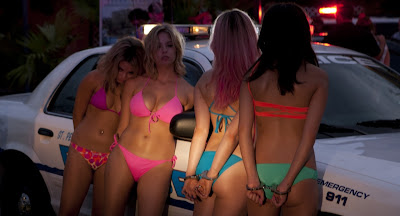 During its unexpected run in multiplexes, Spring Breakers is being prefaced by trailers for upcoming features like 21 And Over and The Hangover Part III. This might lend to the misconception that the film is another in the line of apparently outrageous (actually just offensive) teen party movies, but with bikini-clad girls standing in for moronic male lifeforms. It'd be a bit more interesting if the film was preceded by this clip from director Harmony Korine's previous film, Trash Humpers.

In that event, it'd be more a case of locking the door behind the unsuspecting mainstream crowd, who are about to be quite spectacularly trolled. Spring Breakers stars Disney TV alumni Vanessa Hudgens, Selina Gomez and Ashley Benson, along with the director's wife, Rachel Korine, as a bunch of college students looking forward to spring break. However, with low funds and a staggering sense of entitlement, they violently rob a chicken restaurant to finance their celebrations. Upon their arrival in Florida, the debauchery begins, and only intensifies with the arrival of gangster/awful rapper Alien.

Even though Spring Breakers' sociopathic lead characters are at the polar opposite end of the age scale to the elderly subjects of Trash Humpers, and their actions are nominally more narrative-driven, it would be difficult to see this as Korine crossing into the mainstream. If anything, he's stabbing the shit out of the mainstream from the outside, instead. To me, many of the very positive reviews have been a bit precious about this as an explosion of a sub-genre that many of us reviewers actively dislike. 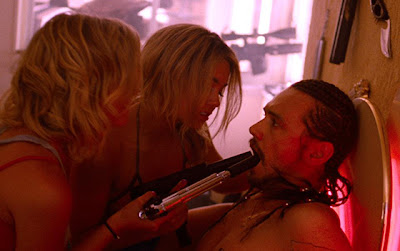 It's a film that pivots upon James Franco's cornrowed, silver-toothed wankster solemnly serenading his girls with a Britney Spears ballad, in a sequence that nobody takes as seriously as the characters do. The sequence segues into a montage of more violent acts, very neatly showing how every sociopathic impulse in the film is underscored by Disney Channel-issue sentiments. It's a great contrast to start with, but this sequence also just happens to be the point after which you start to feel a bit bored with the film. It's all so very arch, and so much arch detachment inevitably becomes more wearying for the audience than engaging.

Franco, on the other hand, utterly commits to the role of Alien, a benevolently dangerous and unexpectedly quotable lunatic, and the actor seems to be the only one who really gets it and gets into it. As such, he easily steals the whole film. Korine directs with one-handed detachment, as easily distracted and bamboozled by T&A as the directors of the films he's apparently lampooning, and while the female leads all give very good performances, they're all predictably underdeveloped as characters. While this is probably meant to show up how shallow the cult of teenage personality has become in modern times, it also means that none of them have anything interesting to do individually- Vanessa Hudgens and Ashley Benson have the most to do, but they usually do it together.

Most of all, despite being billed as "the year's most outrageous film" in its trailers, it never really shocked me. It's a properly decadent film, sure, but it lacks any of those watercooler moments- really memorable and shocking scenes that distinguish the film for anything other than its self-awareness. The restaurant robbery would be an exception, shot from the perspective of the getaway car as it moves around the building and peeks at the violence through the windows, except that it's reprised later on. Lots of the dialogue is repeated from scene to scene too, which enhances the delirious tone, but also dilutes much of the impact. 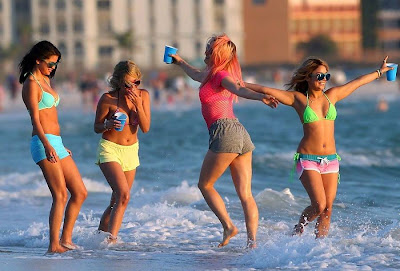 Spring Breakers is a callous, calloused arthouse exploitation movie- it's intentionally a film in which all the style is provided and it's exclusively down to the viewer to provide the substance, making it far more interesting as a mass trolling of the teen audience than in any other regard. The film is worth seeing for James Franco's turn alone, exercising his obvious interest in performance art and livening things up when the lurid and delirious tone becomes more subdued and incoherent. For something that is so vibrant and colourful, taking the piss out of such deadening pop culture indoctrination, the overall effect lacks a certain oomph.