It's been said before that the difference between a homage and a rip-off, in the eyes of a film reviewer, depends solely on how much the reviewer in question liked the more recent film in comparison to its forerunners. If you want to get all post-modern and cynical about it, there is no more entirely new art to be had.

In the case of Oblivion, a film in which Tom Cruise's drone repairman is haunted by vague feelings of deja vu and half-remembered experiences, the question of where it all comes from is more relevant than you might think. In the aftermath of a nuclear war with alien invaders, Jack Harper does his WALL·E thing by day, and enjoys the company of his partner and colleague, Victoria, by night. It's repetitive work, but the couple are soon to be relieved of their duties, and sent off to humanity's outer space sanctuary. But matters are complicated when a shuttle crashes to Earth, and Jack meets Julia, a woman who he believed only existed in his dreams.

This film runs to 126 minutes, and frankly, it's in no rush to unravel the dense, futuristic mystery at its own heart. It's especially interesting to note that Cruise's previous film, Jack Reacher, was another slightly nostalgic genre film, taking its sweet time to unfold, under the steady hand of writer-director Christopher McQuarrie. It would seem that although the actor hasn't really aged much, and shows no signs of slowing down himself, he's drawn to reviving the kind of film that we're seeing less and less, in these days of shortening attention spans. Director Joseph Kosinski intended this to be a throwback to the sci-fi cinema of the 1970s, (we'll get onto its other thematic debts shortly) and surprisingly, Cruise fits right into that. 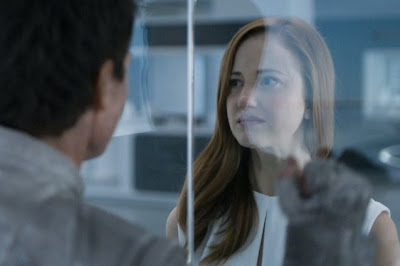 The cast that surrounds him also fit into the kind of roles that don't normally complement the befuddled, lonely working class guy archetype that he's playing, but their characters fit into the plot with relatively less ease as a result. As Julia, Olga Kurylenko exists mostly as the object of the mystery, rather than as an active participant, and Melissa Leo literally video-phones her performance in. The main exception to this is Andrea Riseborough, whose Victoria gets the most dramatic service after our hero and generally shines in every scene in which she appears. But as has been true of Kosinski's previous works, the film is slightly more accomplished in the visual department than in developing the characters.

In contrast to all of that business about homages and rip-offs, it's much easier to find a consensus about the director's previous film, the Disney franchise revival TRON: Legacy. Whether you liked it or not, it was a good-looking film that was ultimately inferior to its own Daft Punk-scored soundtrack, which generally served as the most memorable takeaway from an otherwise uninspired sequel. There's less danger of that in Oblivion, which still sounds temp-tracked by Hans Zimmer's scores for Inception and The Dark Knight Rises. Those are good scores, and in doing likewise, electronic band M83 can't go far wrong, but the score does show up a problem with the rest of the film in the process.

In a genre that is especially given to post-modern frolics and introspection, there's nothing particularly wrong with using lots of other references to tell an original sci-fi story. But while the plot holds its share of surprises, every neat twist is almost immediately reminiscent of a similar plot point in another sci-fi movie, and the same goes for the tone of the film as a whole. We're not talking about nods to unappreciated gems, but whole passages lifted from big sci-fi movie touchstones. It's structured to the point where these twists are still surprising in the film's own contained world, so it would spoil them to mention some of those other films and let you put the pieces together yourself. For example, however, it feels safe to say that when Morgan Freeman's character appears, as seen in the trailer, there's a definite Matrix vibe going on, and the references don't start or end there. 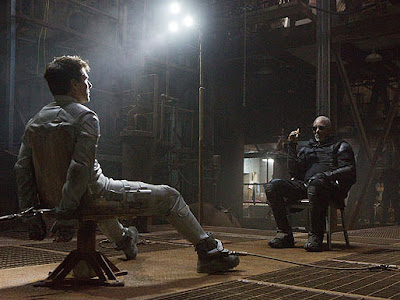 The only big problem with Oblivion is that the film buckles when Kosinski's original contribution is measured against the weight of the touchstone sci-fil films it so closely resembles. A film like Looper often refers to genre classics too, but it also brought something new to the table. This aside, it's still a very watchable and thoughtful sci-fi film, and the kind of retro genre film which deserves to benefit from Tom Cruise's A-list clout in the same way as Jack Reacher did last year. It's not a big dumb action movie, and nor is it an Inception-level head-scratcher- it exists somewhere between the two, as a slow-burning mystery thriller with some stunning visuals and a few more borrowed plot points than Kosinski might care to admit.