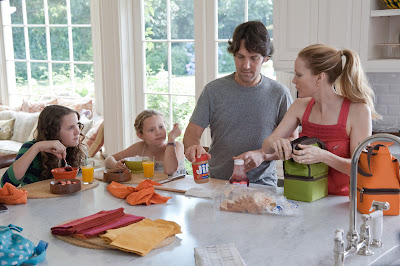 This one came out on the same day as A Good Day To Die Hard, so hopefully you'll understand that I was working through some stuff after enduring that big, brown shite of a movie. This Is 40 comes billed as the sort-of sequel to Knocked Up, expanding and developing the B-plot of the previous film, in which Pete and Debbie were a settled-down analog to the leads.

Paul Rudd and Leslie Mann return in those roles as the characters are on the verge of 40, along with the real-life children of Mann and director Judd Apatow, playing their kids. Pete and Debbie have their birthday in the same week. Pete's embracing it, but Debbie claims she's turning 38. When Debbie has a brush with an older relative, she resolves that she and her husband need to improve their lifestyles and make more time for one another. However, they're running into financial problems with their respective businesses, and family matters persistently stress them out.

Apatow is more prolific as a producer than as a director, but in the four films that he has both written and directed since his debut in 2005, we can see why his latest is really his weakest to date. In The 40 Year Old Virgin, we follow an electronics store employee on a quest to build up his self-esteem and lose his virginity. In Knocked Up, we see a one-night stand turn into a full-on commitment, fraught by issues of incompatibility, as well as finance. Even in Funny People, the affluent creative job role that Adam Sandler casts for himself, in his own movies, becomes sympathetic because we see him struggling with cancer. In This Is 40, there are no real stakes. 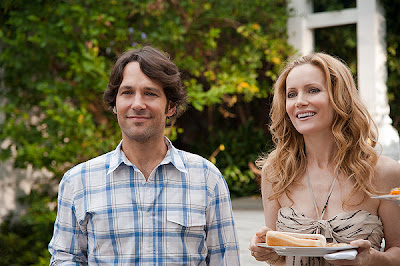 As in Hitchcock, the major conflict revolves around whether Pete and Debbie will have to sell their house, which has a swimming pool and about five times the square-footage of any regular audience member's home, to move to a slightly smaller house. As for the lifestyle changes, Debbie is just as worried about looking old and unattractive as she was in Knocked Up, Pete apparently needs to eat less cupcakes, and the family is apparently skint. To which any of us would say, a) Leslie Mann is both hot and adorable, b) Paul Rudd isn't even close to being fat, and c) you're not even skint by rich people's standards. To watch this sometimes makes you feel like Condescending Wonka- "Oh please, tell me about your affluent middle-class white people problems."

There may be an element of reality to the repetitive arguments between Pete and Debbie, but truthfully, there's no tension about whether or not it's going to work out for them. That disappears around half an hour into the film, when the two go for a weekend away from the kids at a posh hotel. Again, this shows they're not skint, but otherwise, it's a nicely judged scene that shows off the caustic but cute chemistry between Rudd and Mann, and completely sells that the two of them do really love each other. Having seen that, the following 90 minutes are just a process of waiting for them to resolve their problems over and over again.

All of which sounds more negative than the film necessarily deserves. While it has all of the indulgence of an Apatow home movie, the director does have a lovely, talented family- Leslie Mann is great, as always, and Maude and Iris Apatow have become likeable comedy performers in their own right. Albert Brooks and John Lithgow also make welcome appearances as Pete and Debbie's respective fathers, but Chris O'Dowd and Jason Segel actually turn out to be conspicuous by their presence- they're Apatow alumni, but it's tough to tell what their characters are there for. Segel even played a completely different character in Knocked Up, which is just one of the ways in which this proves to be a very loose sequel. Seth Rogen and Katherine Heigl are billed as Mr. and Mrs. Not Appearing Or Even Being Mentioned In This Movie. 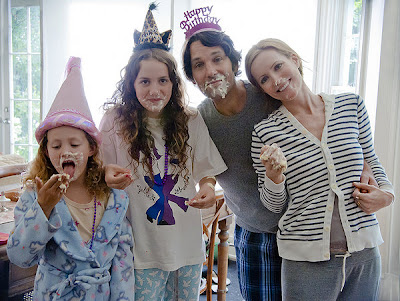 This Is 40 is far too long and repetitive to have the runaway likeability of Judd Apatow's earlier directorial efforts, but more importantly, it lacks the common touch. While it finds the occasional touchstone moment from marriage and family life, it's far less relatable in its over-reaction to first world problems and its truly unfortunate tendency to fall back on jokes about women, ethnic minorities, old people and pop culture. None of the funniest jokes are anything to do with Lost or Graham Parker And The Rumour, and completely to do with the relationship between the family, which, although occasionally obscured by the whinging, middle-class tone, provides a likeable core through the film's extended running time.