Accounting for the time it takes to develop a stop-motion animated film, a new Aardman film feels like a precious thing. That The Croods originated with Aardman, with a script co-written by John Cleese, and yet continued to be developed as a CG feature at DreamWorks after the two studios parted ways, would usually be enough reason to take against the film right away. However, the final result is pretty damn good.

Without riffing too hard on Flintstones territory, the Croods are a less-than-modern Stone Age family, governed by the credo of their lumbering patriarch, Grug- "Never be not afraid." Teenage daughter Eep has other ideas, and her curiosity leads her to an encounter with Guy, a more resourceful cave-dude, who has reason to believe that the world as they know it is about to end. When the ground begins to crack and separate all around them, the Croods are forced to trudge out of their comfort zone, into a brave new world.

Aside from being developed post-Aardman, this DreamWorks effort is also significant as their first film to be released under 20th Century Fox's distribution banner. Anyone who's familiar with the kind of shit that Fox's news division puts out in the States will appreciate the irony of The Croods being a film in which conservatism is not the way forward, and shunning intellect and innovation will only lead to extinction. More importantly, that's just a damn good message for a family movie, but hey, the fun doesn't stop there. 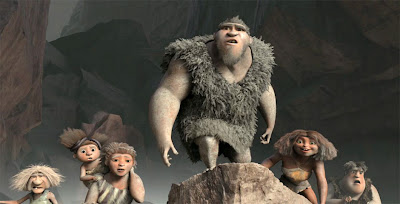 Like many of DreamWorks' films, this one tends towards the comedic, but it ultimately follows a family out of the dark and into what they come to understand as a mystical embodiment of "tomorrow". Better yet, it's both very funny, and very engaging, in precisely the right measures. Mercifully, the studio has now outgrown its formerly slavish pop culture referencing- otherwise, Guy might have been anachronistically hip to lots of music and other movies as he guides the family through their enlightenment. Instead, he gets into a lot of scraps with Grug, who's very set in his ways, and frightened of change, by coming up with a lot of common sense innovations to make life easier.

Although the trailers have focused on Emma Stone's Eep, it's Grug who really becomes the character in whom you're most invested. No small part of that is due to Nicolas' Cage's performance. Counter to their usual stunt casting, DreamWorks didn't just get Cage for this one- they GOT him. He feels more present on screen here than he has in any number of low-grade live-action thrillers of late, with the character literally feeling like an animation of his unique mode of delivery. Surrounded by his family of characters, the character becomes even more effective.

With the possible exception of mother Crood, Ugga, the characters all feel like vibrant and vital factors in the story. You've seen this kind of group before, but seeing as how they're cavemen, they have greater body strength and endurance than your average dysfunctional family, and the film has a whole lot of fun using that to comic effect. This is established in a raucously funny hunting scene early on, and the film never runs out of ways to generate laughs from their capabilities from there, whether via slapstick violence or simple displays of brute strength.

The film is at its most imaginative, though, when it decides to use the setting as a licence to make up a bunch of weird and wonderful creatures to alternately menace and aid our heroes. Where one of the Ice Age sequels would give you a talking gibbon dressed as a pirate, The Croods barely ever goes five minutes without showing you a predator that is part-owl, part-wolf, or a flock of carnivorous birds that serve as flying piranhas. The film's imagination just keeps on giving, never allowing itself to become predictable, and generally adding to the lively and boisterous vibe of an already enjoyable script. 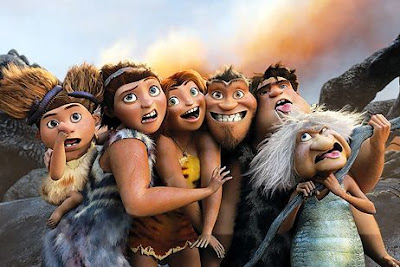 The Croods is DreamWorks' best effort since How To Train Your Dragon, and a film that's built around a bunch of admittedly familiar characters, with witty writing and boundless imagination to enthral adults and children alike. It's so good, even Nicolas Cage actually seems awake at the wheel for once. Whatever Cleese and Aardman might have planned for their version, this result never seems torn between its roots and its current incarnation, and with that, we can only be satisfied. It's funny, fast-paced, smart and unexpectedly moving, and it comes strongly recommended for families this Easter.