OZ, THE GREAT AND POWERFUL- Review 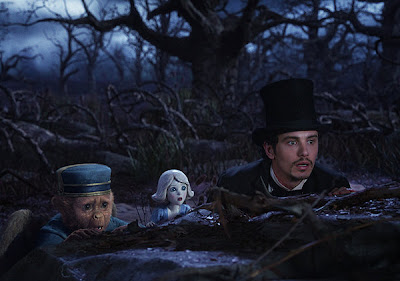 After stepping off of the Spider-Man franchise, and going back to basics with Drag Me to Hell, Sam Raimi's latest is possibly his most mainstream affair yet. But even within the strictures of a 3D family movie, based on a beloved property and revamped by Disney, Oz, The Great And Powerful stands out through the surprisingly effective use of the director's trademark scares and style.

Taking place before L. Frank Baum's novel, The Wonderful Wizard of Oz, this prequel serves as an origin story for the eponymous wizard. If you somehow haven't seen The Wizard of Oz, you'll be stunned to hear that the so-called wizard doesn't have any actual magic powers, so our hero is Oscar Diggs, a two-bit carnival showman who flees the fallout of his womanising ways and ends up being tornado-ed to the mystical land of Oz. Although he plays along with the jubilation of the people at his arrival, he's soon bound to defeat a wicked witch, and liberate Oz from her evil.

On the surface, this serves as the most transparent attempt to follow the billion-dollar success of Tim Burton's Alice In Wonderland, so much so that some have been turned off by the similarity seen in the trailers. In context, however, Raimi has produced a film that appreciates the enduring appeal of The Wizard of Oz. For one thing, the extended prologue is presented in black-and-white, using the old Academy ratio, in homage to the famous transition from Kansas to Oz. It's a gimmick, but what makes it special here is that Raimi knows it's a gimmick.

The same applies to the 3D, which is brazenly used to either throw things at the audience or evoke the SFX of years gone by. This makes it one of the best artistic uses of 3D, because Raimi does more with it than to simply tell the audience that they're more immersed in it because they're wearing glasses. He also knows that he doesn't need to make it darker or edgier. The Wizard of Oz was already dark! Margaret Hamilton's Wicked Witch of the West is regarded as one of the best screen villains ever, precisely because she has been a symbol of brown trouser-time to generation after generation. The film is still scary, and if there's one thing Raimi can do, it's scary. 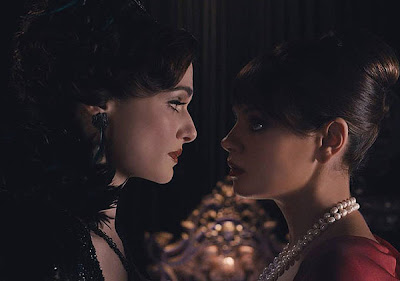 Of course, with its PG certificate worn proudly on its sleeve, it doesn't get so extreme as to shut out a family audience. At its most delightful, though, Raimi uses every trick at his disposal to frighten and thrill the kids, in the kind of way that makes you wonder if the 1939 movie might have been the catalyst to his own career as a horror-focused filmmaker. The willingness to scare is obviously something that he brought to the film; never more so than when the characters enter a dark forest, and point-of-view shots and scary creatures abound. This sense of scary fun what sets the film apart from Alice, or any of the other fairytale flicks that seem to be in vogue since that movie's success.

With that in mind, the film isn't a complete triumph. In the central role, James Franco actually feels somewhat miscast. He was Raimi's Harry Osborn, and the pair clearly work well together, but he struggles to recover as a character who starts out unlikeable and treads through that most trodden of family movie plots before rallying to be a good guy. Robert Downey Jr. was cast in the lead for a long time, and you almost miss that version while watching Franco do his thing.

Luckily, the supporting cast-members are all pretty much excellent. Despite some mixed responses to her performance, Mila Kunis absolutely nails the surprisingly complex Theodora, a witch who's smitten with Oscar, and torn between Rachel Weisz and Michelle Williams' opposing witches. Elsewhere, Zach Braff and Joey King are very good as largely computer-generated characters. Braff provides the comic relief, and King brings sympathy and general adorableness to an especially vulnerable character, following up on a show-stoppingly poignant moment in that prologue.

Such moments continue to arise from unexpected places throughout the film, thanks to a strong script by David Lindsay-Abaire and Mitchell Kapner. But however strong the script is, it's also a little bit long, and so the film really just traipses through the second act. Further to the problems with Franco's casting and Oscar's arc, it's far too late in the film before we start seeing our hero apply his own smarts and wits to get on in a land where everyone believes he's magical. That would seem to be the pitch, but Oscar's stewing tests your patience, when the film runs to 130 minutes. 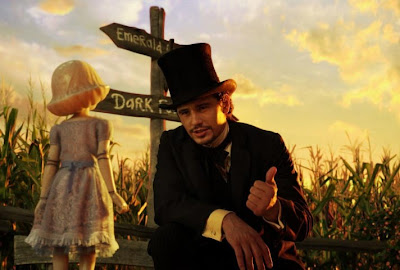 There's a lot to like in Oz, The Great And Powerful, an exercise in franchise building that happens to have been enacted by very talented people. I said much the same thing about The Amazing Spider-Man, a film that missed the ingenuity and humour of Sam Raimi just as much as any Oz sequels will. Here's a film that could so easily become mired in nostalgia and familiarity, but instead gets a firm grasp on both, to make a dizzily entertaining, if slightly overlong, family film. The best parts are scary and funny, and they all outweigh the minor problems with pacing and casting, and Raimi once again proves himself to be an incredibly creative and versatile filmmaker, in a framework that would have seemed quite unlikely.