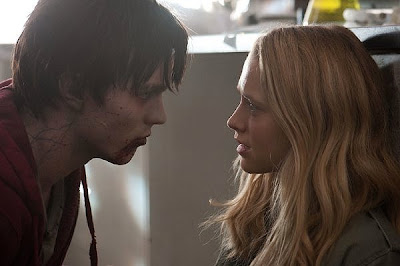 As I said in my review, if you're attached and wondering what to do this Valentine's Day, I Give It A Year might not be your bag this Valentine's Day. Still, it's possible for a romcom to be somehow less cynical and yet more bite-y, as Warm Bodies proves in earnest. Rather than a (literally) fatal over-extension of the popular supernatural romance genre, here's a film that gently ribs the tropes of Twilight-style romances.

The zombie apocalypse has been and gone, and the new status quo finds humans holed up behind massive concrete walls, while the undead roam through what remains of America. One zombie, who only remembers that his first name began with R, staggers around with a surprisingly neurotic inner monologue, longing for a connection to another person, alive or undead. It's love at first sight when he runs into Julie, the live, armed and dangerous daughter of the colonel who leads the survivors, and his new-found affection starts to bring him out of his deathly state.

The film comes from a popular book by Isaac Marion, adapted for the screen by Jonathan Levine, the director behind 50/50. Like his previous effort, Warm Bodies is a film that is both cute and funny in the face of death, admittedly with a marked increase in irreverence and suspension of disbelief. Unlike the post-Lord of the Rings fantasy scramble, which gave us such franchise non-starters as Eragon and The Dark Is Rising, the post-Twilight scramble gets off to a good start with this one, while unintentionally absorbing some of the more deadening qualities of Edward and Bella's odyssey. 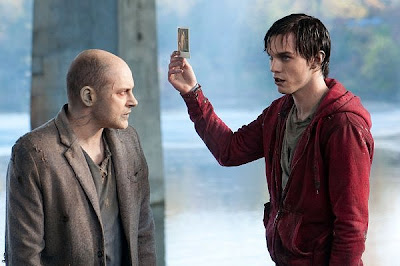 Levine gets things off to a quick and witty start, with R's inner turmoil, given voice by Nicholas Hoult via some kind of teenaged Woody Allen, providing a fresh and funny way into the story. However, once Julie arrives, things seem to lose momentum. Teresa Palmer is terrific as the girl who might just be so wonderful as to bring the dead back to life, and it's good that the film takes time over her great chemistry with Hoult, but it feels subdued, in comparison to the opening, from there on out. It starts with the energy of a Zombieland, but doesn't seem to be in any hurry to outpace a Twilight film.

At these points, it's not courting fans of those films, but patronising them, and the film often teeters on the edge of being too much of one thing and not enough of the other, for both sides of the audience. Most importantly, it feels like it misses a few opportunities along the way. While R is a weirdly likeable hero, the subdued tone could be a big part of why the film fails to seize an emotional connection with the audience. The antagonism between humans, zombies, and a more feral, skeletal breed of the undead becomes the main thrusting point, rather than the teen movie angle that it captures so astutely, early on.

Through all of these quibbles, the film's biggest strength is its cast. With name stars like Hoult and Rob Corddry playing zombies, more time is spent on zombie characters and performances than in many zombie movies. Corddry is normally an dislikeable screen presence, but he's very well used here as R's de facto best mate. The big gag about R, on the other hand, is that his awkward mannerisms and mumbling could as easily be ascribed to a shy teenager. Or, you know, a crap Robert Pattinson. Hoult is no Pattinson though, and he excels in this brand of muted and entirely intentional comedy. On the side of the living, Analeigh Tipton has a scene-stealing role as Julie's friend, and it actually would've been nice to see more of her. 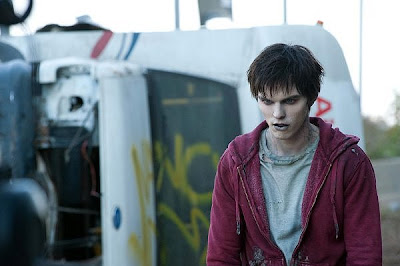 Like its zombie hero, Warm Bodies takes a while to come to life, but there are enough occasional flashes of brilliance to make this a fine, if unusual, choice of Valentine's Day viewing. The 12A certificate should be warning enough that it might not be for hardcore horror fans, or anyone who quibbles over fast zombies vs. slow zombies- R both shambles and jogs, and the latter is funny enough that it's worth the inconsistency. Crucially though, the lower certificate doesn't mean that it's toothless- it just takes its time chewing over the popularity of supernatural romance, while still playing as a cute and funny teen movie, with some of the best zombie acting this side of Romero's canon.