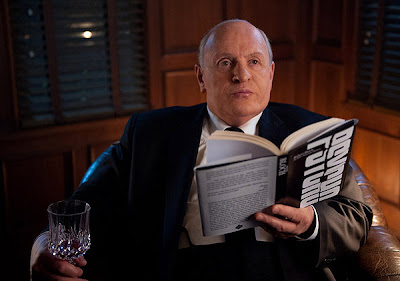 Alfred Hitchcock never won an Oscar, as we're pointedly reminded at the end of Hitchcock, a film which centres around the production of Psycho. Given the tone of the film, and the timing of its release, it doesn't take a cynic to speculate that the producers of this biopic hoped to rectify Hitchcock's lack of Oscars, by winning an Oscar for Hitchcock.

The movie begins with Hitchcock premièring North By Northwest, and coming down with a general sense of inertia. Frustrated by those who want him to make the same picture over again, he actively looks for a more shocking and nasty piece of work to shake things up. He settles upon Psycho, a book based on the true crimes of Ed Gein, and meets immediate opposition from the studio. With the support of his wife and writing partner Alma Reville, he sets about producing the film himself, while the couple's marriage hits some choppy waters.

In recent years, a sub-genre of biopic seems to have sprung up- films like Me and Orson Welles, My Week With Marilyn and, now, Hitchcock, which centre around one landmark production in the career of a historical celebrity. Of those listed, the latter is probably the weakest. For one thing, Hitchcock is another of those movies in which the main source of suspense seems to come from whether the characters will have to move out of their big, expensive house, into a smaller house, which doesn't have a swimming pool! 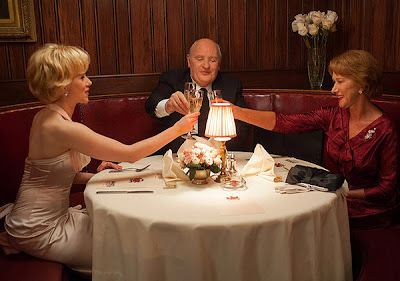 If you know nothing whatsoever about the subject, you might, on occasion, find yourself going "Oh dear, I do hope this Psycho thing pans out for him", but generally, it can be accepted that we know how it went. In the year that Argo has done so well, here's the antithesis to that kind of Hollywood industry film. It's beholden to the "Chubby Hmm" moments that sink so many biopics- the thorough and brilliant folks who edit TV Tropes haven't yet got working on this film's page, but it's so fit to burst with those biopic tropes that there's little room for anything surprising.

That makes it something of an acting exercise, and amongst the key players, Helen Mirren is the clear stand-out. Anthony Hopkins plays the Master of Suspense, (a nickname that leads to the most cringe-making line in this script) wrapped in heavy prosthetics, which gives him little wiggle room to do anything other than impersonate Hitch and eat excessively. Mirren, in playing the long-suffering Alma, makes a great foil to that performance, and is the most consistently watchable part of the movie, partly because Alma is the less celebrated figure, and the unsung heroine in the director's canon.

Everything else is as you'd expect. Danny Huston plays an utter shitbag, Scarlett Johansson's Janet Leigh is a sexy blonde bombshell, and Michael Stuhlbarg is just as excellent as usual. Stuhlbarg also stars in Lincoln, a film which proved that you can still get suspense or entertainment out of long-established history. Me & Orson Welles and My Week With Marilyn each left their central figures with somewhere to go. Like too many other biopics, this undermines itself by focusing on Hitchcock's biggest hit, and not making a terribly interesting representation of the events. Speaking personally, I studied the production and release of Psycho as part of a film marketing module at university, and it was far more engaging without the melodramatic hallucinations of Ed Gein. 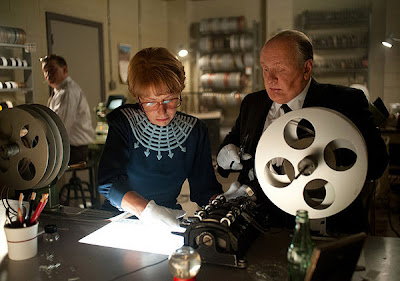 Director Sacha Gervasi came to Hitchcock from Anvil! The Story Of Anvil, and while he shoots this cast with the same fondness as he shot Anvil, this cast are only making pretend as a subject. The film is decent, certainly, but it concerns itself with apocryphal devices like the Gein haunting, and only tentatively prods at Hitchcock's difficulty with his leading ladies, and how that impacted upon his relationship with Alma. You could imagine it making a great double bill with Psycho, except that this fossilises the enduring shock value of that film and lionises the icons who created it, rather than probing that central character. This wouldn't be a problem, except that it would be a great deal better if it weren't pretending otherwise.