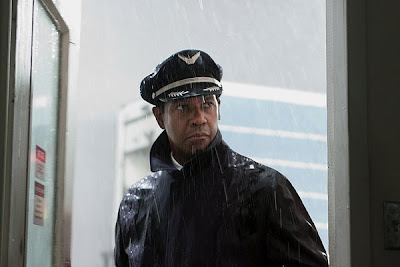 Flight's not a great movie to watch while hungover, or still drunk from the night before. On the other hand, it is the first live-action movie that Robert Zemeckis has made in a while now, after a term of experimenting with motion-capture animation, and it's also one of the only R-rated movies he's ever made. It's an altogether more adult-oriented film than we've come to expect from the director, for good and for ill.

Denzel Washington plays Captain Whip Whittaker, an alcoholic airline pilot who is shown consuming a heavy mix of beer, cocaine, coffee, aspirin and pure oxygen, right before taking the controls of a passenger jet. Despite his intoxicated state, it's actually a technical fault that causes difficulties while in the air. Miraculously, Whip pulls off an incredible crash landing in which only six lives are lost, and 96, including his own, are saved. However, someone has to take responsibility for the casualties, and Whip is forced to face up to his own dependency issues.

Washington has bagged another Best Actor nomination at the Oscars for his turn as Whip, but then as I've said before, I can't think of a film where he hasn't given a top-calibre performance. Whether charming voters and audiences in awards season fare like this, or collaborating with the late Tony Scott, he brings the same gravitas and presence to each role that he inhabits. In Whip, he's got quite a meaty character to bring to life- a man who appears to have his substance dependencies under control, but only by piling upon greater dependency, and generally failing to acknowledge his problems. The film is about Whip having to take responsibility, if not for the initial catastrophe, then for himself and his own issues. 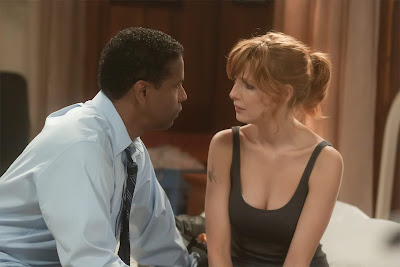 The crash itself comes in a stunning scene, impeded by other issues that will be discussed shortly, but still remarkably staged and executed, and it's pretty terrifying too. It doesn't quite top the nail-biting horror of the plane crash in The Grey, but it exercises all of the director's talent for dramatic spectacle. It's more of an obvious setpiece than something like Lieutenant Dan's missing limbs in Forrest Gump, and it's easily the best part of the film- a disaster that unfolds from the perspective of the terrified souls on board, but one which you get to see replayed from the outside right afterwards.

However, Zemeckis can be a little indulgent in his direction, and his return to live-action filmmaking definitely has that problem. Look at Cast Away, another movie with a crucial plane crash early in its plot, and think about that extended sequence near the end, where it suddenly turned into another movie, because Zemeckis decided to show how everything had changed while Chuck was marooned on his island, as if that was the real subject of the film. It sort of took the air out of what we'd seen up to that point. Flight actually ends in the right place, but threads its excess through the early parts of the film instead.

The main subplot centres around Kelly Reilly as Nicole, a recovering heroin addict whose troubles are intended to parallel those that Whip encounters. Her introductory scenes are intercut with the build-up to the plane crash, in a way that really puts a stopper on the momentum. Reilly is good in this, but if the character of Nicole is needed, to contrast with Whip's own struggle with addiction, then she didn't need to be getting in the way of the main plot. In a film that could comfortably be half an hour shorter, it's hard to avoid the feeling that she is obstructing the way, rather than enriching the plot. Relatively speaking, you see less than you'd like of Don Cheadle and Bruce Greenwood, who rally behind Whip as an investigation begins, and especially of John Goodman, who has a blast playing Whip's enjoyably subversive drug dealer, heralded by "Sympathy For The Devil" on each appearance. 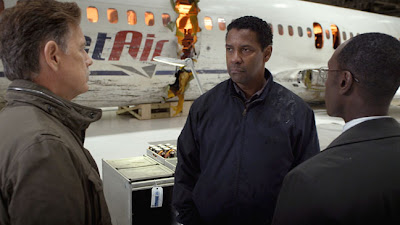 Flight is a strangely muddled film, but one which happens to have at least one standout setpiece and another cracking performance from Denzel Washington. To contrast Whip and Nicole is to show up the latter's inclusion as somewhat pretentious- Zemeckis and screenwriter John Gatins aren't necessarily interested in the type of addict that they've portrayed with her character. There's also an irritating motif about religion that serves to undermine the more challenging tone that it suggests. If it were a little more challenging, and paced just a little quicker, this one might have been something really special. Still, it's more interesting and (ironically) more animated than most of Zemeckis' recent films, and here's hoping that his next one delivers.