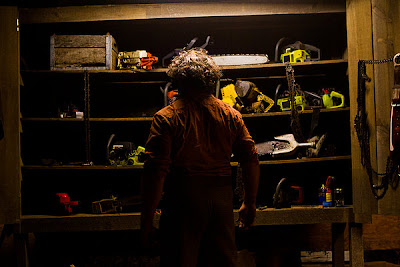 I haven't seen any of the Texas Chainsaw Massacre films. I actually held off reviewing Texas Chainsaw (3D), a direct sequel to the 1974 original, because I planned to watch that film first. By the time you're reading this, I will have seen that film, but ultimately, I decided that this review would be most useful from the perspective of a young, happening dude who hasn't yet seen the original, because that's who this film is for. And I still think it's a bit pants.

Beginning with a potted, very post-converted 3D rendition of Tobe Hooper's horror classic, this sequel shows the direct aftermath of Leatherface's initial chainsaw jamboree, as a principled sheriff fails to prevent an angry mob from burning down the Sawyer family's farmhouse. Cut to the present day, and young Heather's inheritance of a mansion from an estranged grandmother reveals that she was adopted, and she's actually a cousin to the Sawyers. When she and her eminently killable buddies stop off at the house during a road trip, her cousin resurfaces once again.

I include, in the lack of Texan chainsawing in my life, the remake and subsequent prequel that were produced by Platinum Dunes. Those films came with the ugly green and brown colour grading that Michael Bay's production company somehow popularised, and neither of those films held anything that appealed to me. In its favour, Texas Chainshaw is not another snotty/shitty looking movie. That's not to say it's any good, because in a genre where we can reasonably divide slasher flicks into pre-Cabin in the Woods and post-Cabin in the Woods, there's no excuse for this one. 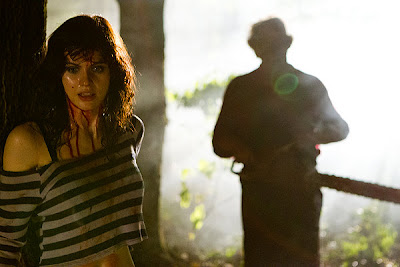 It's a particularly poor show for Lionsgate, who even distributed Cabin, eight months ago, but then this one is actually, weirdly, similar in its structure. It gets all of the usual genre business of killing off a bunch of attractive teens, who are interchangeable with other movie characters of their chosen stereotype, out of the way in the first half, before going absolutely crazy. The difference is that The Cabin in the Woods was very smart, and this film is very, very dumb. Still, that puts it a cut above the grind of certain other, utterly forgettable horror remakes/prequels/sequels.

Costumed in the requisite belly tops and low-cut shirts, Alexandra Daddario looks superb for a character who, after all, should be pushing 40 years old. Heather is shown to be a baby at the time of the events from the 1974 film, and the film takes pains to tell us that it's 2012. That's a small timeline-related quibble, in contrast with the romping stupidity that goes on elsewhere in the film. Without spoiling anything, Thom Barry's sheriff is the most sensible character, and even he does something egregiously, irresponsibly stupid at the film's climax. The other characters merely set the tone for him.

In the midst of all this though, there is some unintended fun to be had. A couple of those aforementioned dumb decisions inspired gales of laughter in the screening I saw, including a novel approach to escaping an estate by car, a use of the iPhone's Facetime function that is unprecedented in its stupidity, and a couple of old-timey pratfalls from Daddario. These clearly fall into the bracket of dumb movie decisions, and not into some kind of guilty pleasure territory, because the film is always so bloody straight-faced, with the emphasis on the "bloody". Everything I've heard about the original film is that it's subdued, particularly in its depiction of violence, whereas this 3D catastrophe is anything but stingy, with its shonky-looking CG gore. 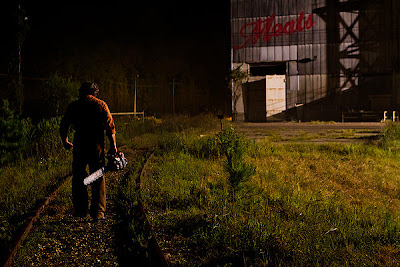 Lionsgate plans to release up to seven more movies in this franchise, and Texas Chainsaw doesn't entirely put me off the prospect. It strives for more psychological complexity than your average horror franchise kickstarter, and even though it doesn't get there, it's not pretentious in that effort. However, while it's not your garden-variety piece of shit, it's still a little stinky. Alexandra Daddario deserves a breakout role some time soon, but it will take more than her to elevate those sequels to an enjoyable, or even mildly scary standard.