RISE OF THE GUARDIANS- Review 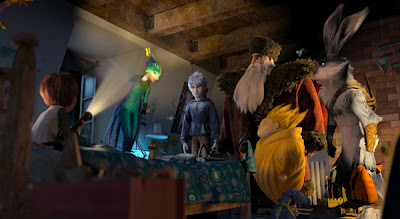 Due to inexplicable scheduling foolishness, DreamWorks held back the release of Madagascar 3: Europe's Most Wanted in the UK from summer until the October half-term holiday. Coincidentally, this means that Rise of the Guardians, which has arrived much sooner, is playing at the same time as the studio's other 2012 offering. While one of them seemed remarkably unfettered by the usual safe tactics, the other seems to have been made with producers watching over its shoulder. Still, if one of your producers is Guillermo del Toro, that doesn't mean it's a bad thing.

Based on William Joyce's popular series of children's books, Guardians of Childhood, the latter offering explores the idea that Santa Claus, the Easter Bunny, the Tooth Fairy and the Sandman are part of an elite group of mythological protectors, who are collectively responsible for safe-guarding the children of Earth. Jack Frost is the newest recruit, and although he initially refuses the call, he becomes instrumental to the battle against Pitch Black, an ancient boogeyman who is determined to make as much of a mark upon the world's children as the beloved Guardians.

The comparison to The Avengers is not only obvious on the surface, but also more apparent in the film itself. In addition to the conceit of teaming up iconic characters to defend the world against a threat that's too big for any one of them to tackle alone, there are similarities related to the villain, the story structure and ultimately, the enjoyability too. As with The Avengers though, the quality of the piece doesn't come without reservations, and it suffers the same initial difficulties in getting off the blocks. 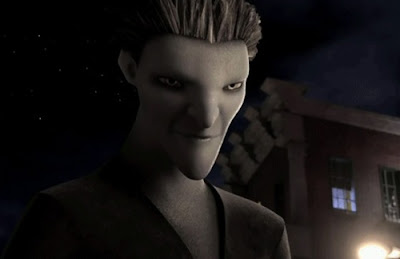 The early scenes seemed particularly frantic and breathless, as though their order had been jumbled around after production had begun. The film doesn't attempt to pull in origin stories for all of the Guardians, which have been the focus of individual books in Joyce's novels, but instead focuses on Jack Frost, who's charismatically voiced by Chris Pine. The seasonal bent to the marketing is more to do with his relation to the weather, than any particular concentration on Santa (or North, as he's known) and/or Christmas. Director Peter Ramsey struggles to find the film's tempo in this first movement, sprawling over 3D-friendly action sequences one moment and emotional character beats in the next.

Once Ramsey does hit his stride, the film really comes to life, with its vibrant re-imaginings of iconic characters doing as much of the heavy lifting as the build-up to The Avengers did for Marvel's big team-up movie. Jack Frost is undoubtedly the protagonist, but kids will love Hugh Jackman's scene-stealing take on the Easter Bunny, and the Silent Bob-ness of the cuddly-looking Sandman. I don't lightly compare Pitch to Loki, because even aside from Jude Law's performance sounding like Tom Hiddleston, the exploration of this boogeyman's character and motivations can be measured alongside the surprising sympathy that Thor's bro can evoke at times. Pitch is much more sinister though- a walking noir character, in the midst of a colourful holiday-themed movie.

As mentioned, this one somehow feels a little producer-led. While their third Madagascar film felt like a showcase of all the insane and surreal gags that the creative team could get greenlit, Rise of the Guardians is back on safer ground for DreamWorks. It's coincidence that the film happened to be finished and released in the same year as The Avengers, but there's a distracting eagerness to replicate the Minion characters from Despicable Me. Of these, North's Abominable Snowman helpers provide the lion's share of the laughs, with the diminutive elves, walking eggs and hummingbird tooth collectors scattering the attention away from the core interests. 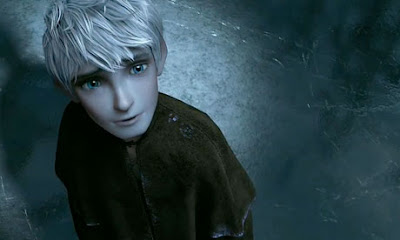 Rise of the Guardians is a thrilling and thoughtful animated action film, most notable for its exciting use of a major tract about belief, which is happily free of any specific religious connotations. The Guardians act at the behest of "the man in the moon", and their uncertainty about whether there is someone watching over them is reflected in the children of the world, in the course of Pitch's uniquely dastardly plan. Given the DreamWorks logo, the times in which the film gets a little lost can neatly be attributed to that metaphor of the man in the moon watching over and directing its flow. Once it gets going, it's a really enjoyable adventure film, which is sure to bedazzle and enchant family audiences.