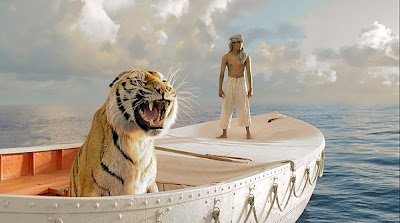 Yann Martel's best-selling novel, Life of Pi, has flummoxed attempts at big-screen adaptation from directors as varied as Jean-Pierre Jeunet, M. Night Shyamalan and Alfonso Cuarón. But in the age of The Lord of the Rings, Watchmen and the upcoming Cloud Atlas, there's no longer any such thing as an "unfilmable" novel. Now, having patiently waited for the level of effects technology to catch up, director Ang Lee has brought the film to the screen.

Life of Pi centres around a man called Piscine Molitor Patel, (Pi, for short) who is seen telling the extraordinary story of his life to a writer who is struggling for inspiration. Once, Pi's family had a zoo, and decided to relocate from India to the United States. After a terrible shipwreck, the only survivors left were Pi and a handful of the zoo's animals. Before long, it comes down to just the boy and a Bengal tiger called Richard Parker, all alone on a raft in the middle of the Pacific ocean. The story of his survival, Pi promises, will make the writer believe in God.

20th Century Fox have been billing this one as "the next Avatar", referring to the visuals more than anything in the decidedly more complex and unconventional story. The special effects, by SFX house Rhythm and Hues, are superb, and are best exhibited by the creation of Richard Parker. Apparently, only six of the shots of him used an actual tiger, with the rest of the film being CGI-generated. Think of the effects in Rise of the Planet of the Apes, where you wouldn't necessarily look at a still image of Richard Parker and completely believe it was real, but the body language is utterly authentic when the character is in motion. 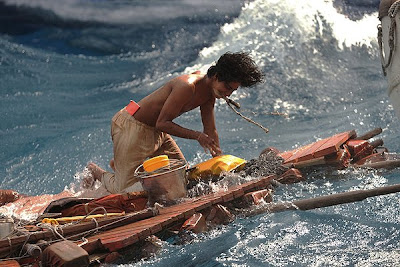 Richard Parker himself is the most exciting, unpredictable supporting character I've seen in a film all year. For once, Andy Serkis isn't behind recreating the animal's pixel-drawn behaviour, so all kudos goes to the effects house. In the acting stakes, the most astonishing turn comes from Suraj Sharma, as young Pi. As the film is highly effects-driven, it's not hard to imagine that he spent a lot of time acting opposite nothing, which makes his powerful performance all the more impressive. Irrfan Khan annoyed me a little more as the older Pi, for reasons that we shall get onto, but Sharma is phenomenal, given his lack of experience and the importance of reacting to CG characters and elements that would not have existed at the time he was filming.

Likewise, the film raises the bar for 3D once again, by taking the phoney edge off of reflective surfaces, a problem that has taken me out of stereoscopic films in the past. More than the necessity of ironing out this wrinkle in a film that largely takes place at sea, it looks amazing. My quibble with the 3D would be that I consider any shift in the aspect ratio to be cheating- the first instance of this, in which a smaller ratio allows an onslaught of flying fish to bounce out of the image, is the most effective. Still, at least Lee opts to use the technology to do things that you couldn't do in 2D, which is more than many filmmakers have bothered to do.

Lee's also getting plenty of admiration for using top-of-the-range special effects to tell a story about spirituality, instead of using them to create another slap-bang action blockbuster, but in truth, Martel's novels is another one of those slam dunk bestsellers, which will entice readers to see any movie carrying the same name. Without having read the book, I've been told that the film's framing device, in which the older Pi, chats to Rafe Spall's writer, comes right from the page. It's no less problematic to me, because I think that both actors' performances are sub-par, and that the script is at its weakest in these scenes.

The majority of the film is rock solid, enthralling stuff, from the point of the devastating shipwreck scene, to the ultimate conclusion of young Pi's ordeal. It's a masterclass in visual storytelling, pulling in existential and spiritual themes in a way that really would have blown me away, if we didn't keep crossing back to those two narrators. The thing that most irritates me about this aspect of the film is that you don't have to do this much explanation in a visual medium, especially when the sumptuous imagery does a lot of the talking. I know people will disagree with me here, but I think that the film bypasses a perfect opportunity to end, ten minutes before the credits actually roll, and goes on to express its conceit more clumsily. 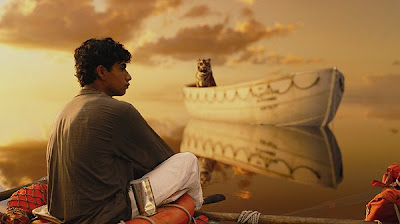 In summary, I do recommend that you see Life of Pi, because its biggest success is visual. It's pretty, but thanks to the way that the framing device with Khan and Spall burrows itself beneath the strong visual storytelling in the main thread, it talks itself out of being truly profound. When it comes down to Suraj Sharma and the stunning animation of Richard Parker is when the film is at its most bedazzling and life-affirming. More than that, Lee's use of 3D makes it one of the few films that I recommend you see in that format over 2D. I doubt whether it will enjoy Avatar's box office success, but as a spiritual blockbuster, it is as yet unparalleled.