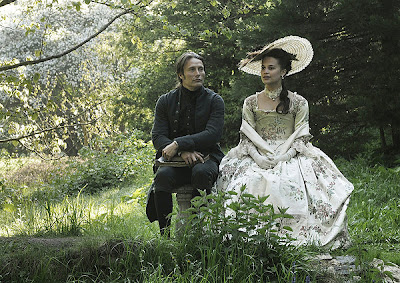 It's close to the end of the year, and seeing as how most of the week's cinema-going will surely be given over to Bilbo Baggins and his mates, it seems as good a time as any to catch up with watching and reviewing new films that I missed in the cinema in 2012. I'll squeeze these in this week, around my review of Life Of Pi, (come back on Wednesday) and A Royal Affair is first up.

Based on both historical events and the novel A Visit From The Royal Physician, the film begins with Caroline Matilda of Great Britain, looking back on her arranged marriage with King Christian VII of Denmark. The king is mentally ill, and his immaturity and attention-seeking nature are deeply frustrating to both Caroline and, presumably, his impoverished people. As a lowly doctor and man of the Enlightenment, Johann Struensee gets a lucky break when he wangles the cushy job of royal physician, and becomes the king's most trusted friend, as well as Caroline's secret lover.

If you've let your historical knowledge fall by the wayside as much as I have, then A Royal Affair holds some surprises in its structure and execution. It gets off to a standing start, having come from a novelised version of events, but the story is so dramatic, and well-told, as to make you forget that it's based on history. Director Nikolaj Arcel and co-writer Rasmus Heisterberg establish trust in Caroline's perspective from the very start, by having her narrate the story as a letter to her children, but their treatment is still only more cinematic, when it broadens out, and flowers into a complex study of the relationships involved in this period of history, in which there's nothing as simple as a protagonist, an antagonist or a love interest. 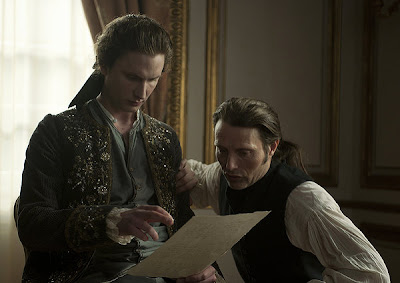 In this representation, it's Mikkel Følsgaard who is most surprising, in his role as King Christian. As we meet him, he's quite the foul and immature little dickhead, and your sympathy lies with Alicia Vikander's Caroline. It's not merely that the film later shifts away from her perspective, but you do actually start to feel sorry for the King after a while. He's no pantomime villain, with his madness driving his wife into the loving arms of Struensee, but a pitiable character, with his mental problems being exploited by the powerful and the corrupt, which surround him on all sides. Følsgaard plays it marvellously, and even in his comparatively smaller role as the drama wore on, he stuck in my mind.

Struensee is the principal character, if not the hero of the tale, and Mads Mikkelson is on form as the doctor who somehow becomes the de facto regent of Denmark. The journey is an idealistic one, but as the film wears on, we see that it's beset by the same influence and corruption that made the government such a pain in the arse before he came along. In one very powerful scene, we see how censorship has been outlawed in the wake of Struensee's enlightening of Denmark, and later proves to be essential in maintaining the bloodless coup that he's inadvertently engineered.

Between them, Arcel, Heisterberg and Mikkelson have made the choice to play the doctor as essentially altruistic, and that makes the actual result of his attempts to improve life in Denmark all the more tragic. Christian has a penchant for reading and performing Shakespeare, which not only gives way to a wry dismissal of that "something rotten" line in Hamlet, but also parallels with the genre of tragedy in a real, old-fashioned kind of way. The central conceit of the film revolves around an oppressed generation placing their hope in the future, and showing how it's not possible for those who set a bold example for the next generation, to avoid suffering for their idealism. 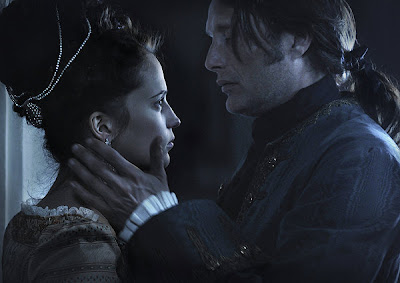 A Royal Affair is a layered, fascinating period drama that manages to treat the history that it portrays both dramatically and objectively. Følsgaard's loony, pitiful king sums this up best, but unlike certain English language dramatisations of regal goings-on, it's not overtaken by showcase performances, or sumptuous production design, or even the temptation to make the central affair more romantic. Instead, Arcel presents an even-handed and compelling study, somehow even more brooding and intellectual than Mikkelson's excellent turn.