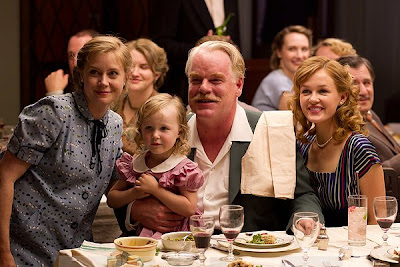 When properly executed, counter-programming makes my job that much easier. With Breaking Dawn Part 2 swallowing up seven screens in my nearest megaplex, (and possibly even more in yours!) some genius at Entertainment Film Distributors decided to capitalise on the widespread indifference of threatened fanboys by expanding the latest Paul Thomas Anderson film beyond the capital, where it's been playing for the last fortnight, in order to serve those who haven't the slightest interest in seeing how that old saga wraps up. Either way, you're going to see Rami Malek.

Other than that, it should go without saying that The Master could not possibly be more different to Breaking Dawn Part 2, and it's certainly not as driven by narrative obligations. Seaman Freddie Quell returns from naval service during the Second World War, traumatised and grappling with major alcoholism. Trampling his way through a number of post-war careers, he eventually encounters Lancaster Dodd, a writer and scientist who leads a group of devout followers in pursuing The Cause, a remedy for psychiatric conditions that apparently encompasses a trillion years of life on Earth.

Once Freddie and Dodd come into contact with one another, there's really not a lot more to describe, in terms of story. This is absolutely a character study, which makes it tempting to spend 800 words talking about the performances. There's more to it than that, but I am going to talk about the performances a lot, particularly in relation to Anderson's extraordinary script. The cast is headed up by Joaquin Phoenix and Philip Seymour Hoffman as servant and master respectively, and so much of the film is predicated on their performances, and their interactions with one another, it would be rude not to acknowledge their instrumental roles. 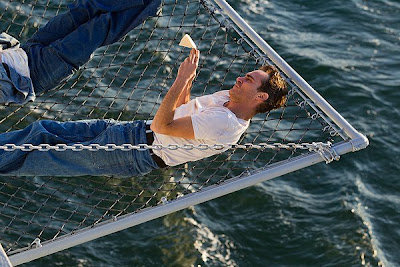 Sometimes, Phoenix almost seems ready to buckle under the weight of playing Freddie. When I say he has a major alcohol problem, I mean major- most of the cocktails he concocts include paint thinner, or photo developing fluid, or some wince-inducing ingredient. His posture and body shape are twisted and unique, and his appearance shows the rigours of doing his misguided mockumentary I'm Still Here, and now this film, back to back with one another. Nevertheless, the material seems to buoy him through his physical transformation, and his performance is occasionally reminiscent of a defiant Marlon Brando, in a film that is packed with 1950s throwbacks.

Dodd becomes entranced by Freddie from their very first scene together, and Hoffman brings sincerity and charisma to his character's desire to reform the poor sod. It's essential that the eponymous master has a genuine benevolence about him- he's not a manipulative cult leader, but someone who, at some point amidst his high-faluting philosophical hooey, started to believe his own hype. The much-mooted relation to Scientology isn't necessarily critical, because in the course of studying these characters, Anderson has other aims in mind. Specifically, he has Phoenix and Hoffman simultaneously engaged in both a battle of wills, and a whirlwind bromance, and pretty much all of their scenes together are absolutely astonishing.

However, fewer people seem to be talking about Amy Adams' scene-stealing performance as the Lady Macbeth of the piece, Lancaster's doting wife, Peggy. Starting with The Fighter, Adams has seemed hungry to break type, and Peggy is her nastiest role yet. As lovely as she is normally, she's sinister and yet eerily supportive throughout the film, and she's consistently able to liven up the film as much as any combination of Freddie and Dodd, all by herself. Without showing how she was won over to the Cause, (that's Freddie's journey to take) or portraying her as a monstrous or corrupt figure, she serves as part of the film's conceit about objectively portraying cult mentality as attractive, in a post-war environment where close-knit communities are on the wane.

If there's a problem with the lack of narrative drive, it's that Anderson's previous film was There Will Be Blood. Even though there's no explicit promise that things are going to reach an epic crescendo, as there was with his previous, interestingly-titled feature, the tension increases throughout the first two acts, and then starts to peter out. Jonny Greenwood provides the score for this one too, and the percussive, discordant rhythm also seemed to be headed in a slightly different direction, before the third act. I would suspect that casual viewers, who might expect a finale as instantly iconic and memetic as that of TWBB, will be disappointed, but I wonder if I was expecting the same thing. 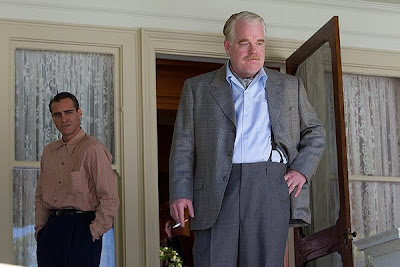 This might have contributed to the bamboozling effect that The Master had on me, but it seems certain to reward multiple viewings. It's a beguiling and disorienting film whose ambience actually rises above virtually every other quality, except for the masterclass performances by the three leads, of whom Amy Adams was the biggest surprise. Anderson doesn't just hearken back to the historical setting, but to the kind of drama films that might have been made in that period as well. It has a confounding and almost hypnotic quality, and it definitely won't be everybody's cup of tea, but it's a fascinating character study all the same.