NATIVITY 2: DANGER IN THE MANGER! Review 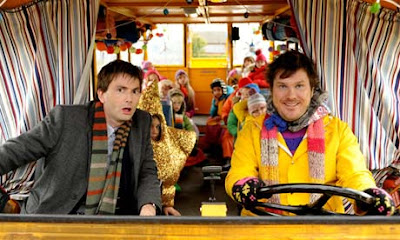 Back when I was young(er) and stupid(er), I swerved a cinema viewing of Nativity! for reasons involving Alan Carr acting. A mustachioed Alan Carr, no less. One year later, the family watched it on demand, despite my protests, and I actually quite enjoyed it. There's definitely a gap in the market for Christmas films that aren't entirely secular and commercialised, which aren't bug-nut insane. And so, as unconcerned with the commercial side of Christmas as it was, they've now made a sequel!

Nativity 2: Danger In The Manger! brings back demented manchild-cum-teaching assistant Mr. Poppy and his beloved primary school class, as they attempt a last minute entry for the prestigious Song For Christmas contest. After much trouble in securing a replacement for Martin Freeman's Mr. Madden, the headteacher manages to get David Tennant's Mr. Peterson to look after Class 7. He's not on board with the Song For Christmas plan, so Mr. Poppy and the children kidnap him and begin a quest to Castle Llewyn in Wales.

The fact that I'm writing a serious review of this film might be funnier to some than the film itself actually turned out, so as a precursor to all that follows, it should be said that this film is aimed at very young children, and going by the reactions in the screening that I saw, it's succeeding with that target audience. Some will feel that the first film was more inclusive of a family audience, but the perceived flaws in this one aren't to do with failing the young fans, so I have to conclude that it's not nearly as bad as other reviewers have said. 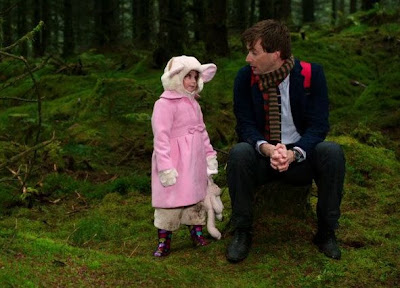 For grown-ups, there might be a few more difficulties in suspending disbelief with this instalment. Around the point that he takes a bunch of kids, a colleague and even a young baby across the Welsh countryside, without permission, it's easy to see Marc Wootton's Mr. Poppy as more of a sinister figure than the lovable manchild that he's intended to be. He made a good double act with Martin Freeman, who is a consummate straight man, and who gets passing mention here for having "abandoned" the series, but he's mismatched with David Tennant, who usually gives much bigger performances, and so he seems to jostle with Wootton a little.

Seemingly in recompense to Tennant, he's given a dual role, as both the put-upon class teacher and his imperious twin brother, a world-class composer who's also entering the Song For Christmas contest. To his credit, he manages to hurry through the whole Tennant emotional range in his teaching role alone, while the more villainous role is confusingly linked to baby-stealing at a crucial moment, which only reinforces the uncomfortable child abduction undertone to Mr. Poppy. Nepotism is another word that hasn't popped up a lot in connection with this film, but with Mr. Poppy's aunt being the headteacher who keeps him in work, you realise around halfway through that there isn't a single teacher who would still have their job after this adventure, if it happened in real life.

Writer and director Debbie Isitt has essentially made another Christmas school play writ large, with all of our young heroes looking forward to celebrating baby Jesus, more than getting presents. Oddly, this strain is more effective and enjoyable in the scenes that lampoon commercial Christmas songs, which include rich kids singing about Dickensian poverty, a Justin Bieber knock-off, and an underused Jessica Hynes as a narcissistic former starlet. The songs are written in advance, obviously, but the rest of the film was largely improvised, and with the over-reaching adventure tone, there's less focus on the kids doing their thing, as was so effective in the first film, than there should be, and that's where the comedy falls down. 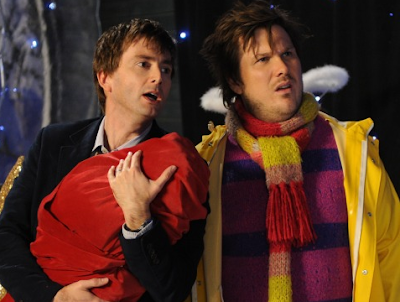 Nativity 2: Danger In The Manger is a more needlessly complicated beast than its predecessor. It's the same length as Nativity!, but it feels much longer as it spirals into an unnecessary adventure tangent with difficult undertones. When it all comes back around to the kids singing Christmas songs and being adorable anyway, the diversion feels less problematic than pointless. David Tennant manfully wrangles with Marc Wootton, who's only become more irritating since last time around, but despite everyone's best efforts, it's less likely to become a Christmas fixture than the endearingly shambolic original.