This review contains SPOILERS for all five of the Twilight films. You can read my spoiler-free review of Breaking Dawn Part 2 on Den of Geek. 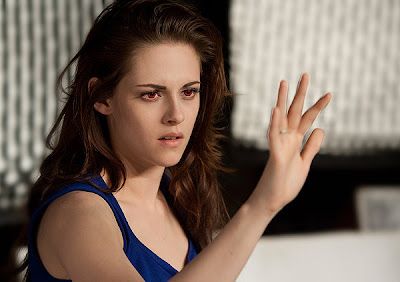 Even with the final, batshit crazy book of Stephenie Meyer's Twilight saga getting cleft in twain by studios who wanted to give the more surreal elements some room to breathe, and pocket double the box office returns along the way, the film adaptations have had a remarkably quick turnaround. The annual rate of release means that we've had five films out since 2008, culminating in this "epic conclusion that will live forever."

Yes, Breaking Dawn Part 2 takes on a burden that none of your more serious movies had to deal with this year- it has to deal with the fallout of the previous movie, which ended on a werewolf falling in love with a baby. More importantly to the main plot, however, Bella Swan is a new vampire, as well as a new mum. Beyond the issues of finally getting everything she wanted, she and the Cullen family are once again pitted against the Volturi, when a vengeful and jealous vampire reports their new arrival. Creating an immortal child is a great sacrilege, and it seems like vampire king Aro is done with the Cullens' bullshit.

Had I watched three seasons of Buffy The Vampire Slayer before any one of the other Twilight movies, they might have looked even worse than they did with that shameful gap in my knowledge. The relationship between Bella and Edward looks so retrograde compared to the superbly written dalliance between Buffy and her vampire paramour, Angel, but in Breaking Dawn Part 2, this barely figures into the plot. More than just dealing with the fallout from Part 1, this one also asks what happens after Bella gets everything she wanted with Edward, and resolves the romantic tension between herself and Jacob? This is the conceit on which the whole bloody saga is built, and luckily, Bill Condon has some ideas.

I wouldn't dream of snarking that Kristen Stewart, an actress who I still rate in most of her less costly film work, seems more animated when she's essentially been re-animated, because I mean it in the best possible way. Although it's hardly a tour-de-force, we finally see some wisdom in her decision to slum it for four films, in a role as insipid as Bella's- shoving Robert Pattinson and Taylor Lautner to one side, vampire Bella is far more interesting to watch. The new mother aspect is far more pertinent than the newlywed status that took up most of Part 1- the thorny issue of Pedowolf is tackled very early on, with Bella beating the shit out of Jacob, as all of the filmmakers frantically try to alleviate the weirdness of his imprint on baby Renesmee. 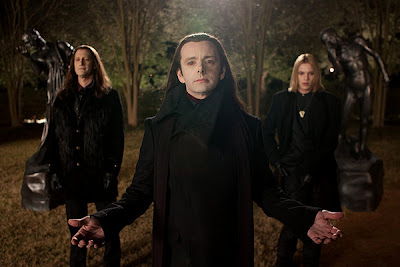 The rest of the film is utterly bananas, with the leavening of this reprehensible plot twist being the only real concession to sanity. While it's not a drastic improvement in terms of pacing or motivation, it's more brisk than any of the other films. With the finish line in sight, Condon is able to expand upon the B-movie ambitions of his first instalment. Then again, the canvassing of vampire witnesses all around the world seems a little extraneous, particularly when the most memorable minor characters are Vladimir and Stefan, (who seemed influenced by Dracula and Renfield) and that's because they're more reminiscent of Bela Lugosi and Boris Johnson.

Still, there's only one thing we can talk about in a spoiler review. The thing that every uber-fan I overheard was chatting about as they left the cinema, with many cries of "That wasn't in the book!" The simultaneously rapturous and frustrating surprise that was Alice's vision. Staged as an opening premonition from a Final Destination movie, it's obviously a cop-out to press the reset button and end happily ever after, but you know what? I saw characters falling into a chasm to the centre of the Earth. I saw Michael Sheen pull a Kenneth Williams face while holding Peter Facinelli's severed head aloft. I saw a wolf eat Dakota Fanning's head. I saw all of this in a Twilight movie, and I give not a flying fuck if it "really happened"- I saw it, and I laughed my arse off.

Does this make me the obvious male? The poor boyfriend or husband who's dutifully traipsed to see these films in the hope of a cool action scene in the final instalment? Well, it depends on whether or not they're disappointed by the cop-out. Frankly, I wasn't. Sure, it shows up the lack of stakes, (in a series where burning with sunlight doesn't work on vampires either) even though the film's closing out the saga, but paradoxically, it earns its own escape by being so unexpectedly entertaining. Condon validates the happy ending, and even if you still roll your eyes, he deserves a medal for changing that anti-climax of Meyer's into an infernal and yet still faithful adaptation. In a series of five films with a serious shortage of iconic moments, that scene alone, with special mention to the equally barmy aspects, makes this the best of the series.

The battle scene is particularly well choreographed, with all of its surprisingly violent twists and turns making up for the typically sub-par special effects, and there's a very impressive number of hilarious reaction shots to all the mortal peril. As usual, the cinematography is the best technical aspect, with Guillermo Navarro reprising his duties from Part 1, and a welcome musical score by Carter Burwell distracts from the pre-ponderance of the soundtrack. It's those pesky special effects that really let it down- in particular, the horribly uncanny effects on Renesmee make a fine case for the Volturi dropping her into a fiery pit, and I'm not sure that's what the visual effects artists intended. 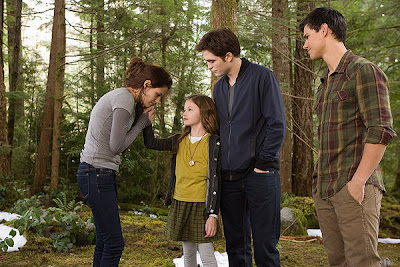 I've never really bought into these films, even though they've sustained my interest through both the fleeting highlights, and the obviously bad and unintentionally hilarious parts- that's more than I can say about Taken, or most other principally male-oriented action franchises. This finale fulfils the promise that went unsatisfied at the end of Part 1- while the first instalment was the victory lap, Breaking Dawn Part 2 cartwheels and Gangnam Styles its way around the arena, in that sedate kind of way. Most interestingly, it's still trying to win you over, right up until the obligatory corny ending. As Bella discovers her power of YouTube, the intractable, but vaguely comfortable notion of "forever" seems as good a sentiment as any, to close out this bewildering franchise phenomenon.

I'm Mark the mad prophet, and until next time, don't watch anything I wouldn't watch.
Posted by Mark at 04:00