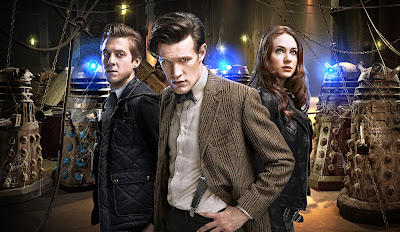 I haven't been doing these episode by episode, as is usual, even though Steven Moffat's approach to the most recent run of Doctor Who has been along the lines of a "mini-blockbuster" each week. Given how completely separate they are, I realised that it would be more interesting to review the first half of the seventh series in terms of themes, and looking into what unifies these five episodes.


Most obviously, these episodes- Asylum of the Daleks, Dinosaurs on a Spaceship, A Town Called Mercy, The Power Of Three and The Angels Take Manhattan- are about bidding farewell to the outgoing companions, Amy and Rory, but hey, there's more to this recap than that. Reviews will obviously contain spoilers, so if you haven't seen the episode yet, toddle over to the iPlayer, or watch BBC Three at some point in the next century's worth of repeats. 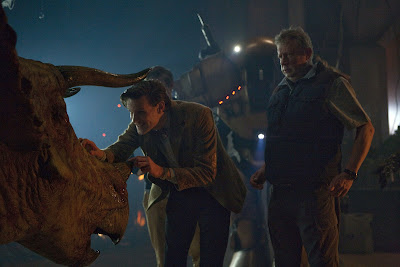 Before I get into dissecting the stuff that brought the episodes together, it makes sense to start by saying what I thought of each story from this run, a-like so...

Asylum of the Daleks by Steven Moffat

The Doctor is roped into decommissioning an asylum planet, where every Dalek he has ever defeated has been dispatched, and finds stranded computer genius Oswin Oswald amidst the turmoil. As with many Dalek stories since their initial reappearance in 2005, the Daleks kind of feel like they're in the background, especially with the surprise antics of forthcoming companion actress Jenna-Louise Coleman (more on whom later.) Still, it's also the best Dalek story since 2005, even if it does that very Hollywood thing of not delivering on the promise of "Every Dalek Ever".

Dinosaurs on a Spaceship by Chris Chibnall

Picking up a gang that includes Amy, Rory, Rory's dad, a big game hunter and Egyptian queen Nefertiti, the Doctor tangles with a criminal whose cargo ship is on a collision course with Earth. Even though it has the pacing and over-stuffing of a Moffat-era episode, this feels more like an episode from Russell T. Davies' tenure than anything we've seen in a while, and it's a welcome reminiscence. Nefertiti's involvement doesn't make a lot of sense, but some CG-dinosaur action and a lot of spot-on domestic humour, largely involving Mark Williams as Brian, makes into the good kind of "romp" episode. 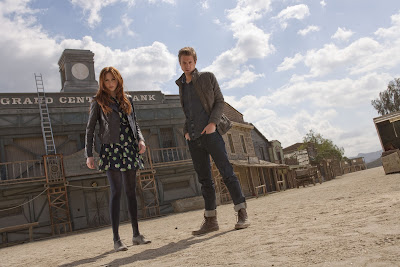 In the Old West, a small town is held captive by an extraterrestrial gunslinger, who's on the hunt for an alien doctor. Comparing this to episodes like last year's The Curse of the Black Spot, it's surprising that this isn't nearly as much of a genre pastiche. Like any good Western, it's a tale about morality. As such, there isn't really a clear-cut baddy in this one, and Whithouse's writing is as disciplined in its pacing as his last offering, The God Complex. Even though it's a Western with robots and aliens, he resists the urge to overstate any of its trappings, and it pays off.

The Power of Three by Chris Chibnall

The Doctor moves in with his companions for a year, after small black cubes suddenly materialise all over the world, for no apparent reason or purpose. Some have suggested that Chibnall's two episodes here are a part of grooming him to take over from Moffat someday, although it's really more like the Moff is delegating the domesticated episodes in order to do his blockbusters. Definitely the most RTD episode since Moffat and Matt Smith took over, that has some more fun with Brian and the potential for a great new recurring character with UNIT, in the form of Jemma Redgrave's Kate (Lethbridge) Stewart. After a great build-up, the ending was a little bit rushed, especially with the way it squandered Steven Berkoff.

Rory is sent back in time during a tangle with a Weeping Angel, and in trying to rescue him from 1920s Manhattan, the Doctor goes on his last journey with the Ponds. Breathlessly emotional and full of big ideas- it's a fitting exit for Amy and Rory, but you have to take a lot at face value, not least in accepting that their story is completely closed, especially with a reunion-friendly anniversary coming up next year. The bastardly power of the Angels remains undiminished by their latest appearance, especially as they manage to hurt the Doctor so deeply by the end of this episode. 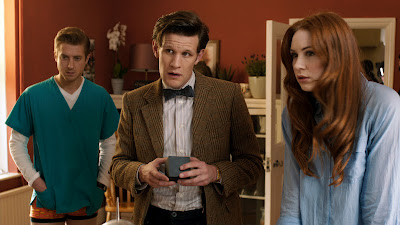 In connecting the five episodes together, it's not only the final hurrah for the Doctor's companions, but a deconstruction of the family unit that they've built. While the families of Rose Tyler et al were used as a grounding point during the Russell T. Davies era, Moffat made the modern family unit into something exotic and wibbly-wobbly timey-wimey. We've seen the companions become the Doctor's mother and father-in law, with their genetically altered offspring becoming River Song, the Doctor's wife.

With the short-lived role of Rory's dad, there's a domestic counter-point, but through the first five episodes, this serves to remind Amy and Rory of what they're missing, when they travel with the Doctor. There's much discussion of how real life jars with their adventures, with the Doctor gleefully popping in and whisking them away from being grown-ups. The story of the Doctor and Amy Pond started out like Peter Pan, and has gone on in fairytale fashion since, and this run has seen him undeterred by the fact that Wendy (Amy) has grown up.

It's mentioned in The Power Of Three that the Ponds have known the Doctor for ten years, in relative time, which has to be longer than most companions usually last. It's a shame that Brian was introduced and seemingly forgotten, as Moffat's emotional conclusion to their story focused more on the break-up of the exotic family than the domestic. That's to say nothing of Amy's parents, who were restored into existence at the end of series five, and have never been mentioned since. Moffat's Who takes place out amongst the stars, with far less interest in grounding the series than has gone before. 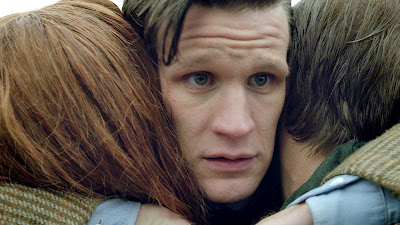 The companion still grounds the Doctor in sympathetic territory, but they just have to go wherever in the universe he may be, rather than bring him home for lunch. To that end, there were plenty of assertions, amidst the foreshadowing, that the Doctor should never travel alone. With Jenna-Louise Coleman arriving at Christmas, that was never going to be the status quo for long, though it'll be interesting to see how the rest of the series adapts to her Dalek-ness. Even with Moffat's penchant for repeated memes, it's hard to imagine that the Doctor's first meeting with his new companion is also her last, a la River Song's storyline. Performance-wise, she got off to a great start in Asylum of the Daleks, with a spunky and witty performance that bodes well for the next run.

Five episodes doesn't seem like enough time to tell if Moffat's blockbuster approach is working, but it's set to continue through the second half of series seven. Most of all, I personally miss the cliffhangers, which feel just as intrinsic to the series' formula as the companions. Only The Angels Take Manhattan seems like it might have stretched out to a two-part story, so I can't deny that it works in terms of economy with storytelling, but it would be nice to get a proper cliffhanger again before this series' 14 episodes are through. 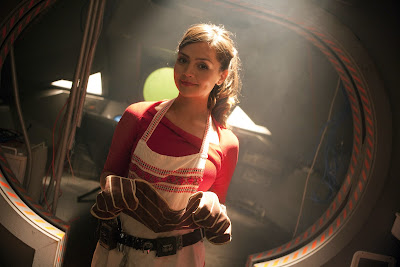 Karen Gillan and Arthur Darvill got a fine send off in this run of episodes, and the completion of their story feels like a reasonable point to break off before the new girl arrives at Christmas. Smith's 11th Doctor is still going from strength to strength, and while the fairytale of his friendship with the Ponds has mostly been enchanting, it feels like the arrival of the new companion might give him something new to do with the role. Steven Moffat has said that Doctor Who is the companion's story, and that the series changes each time the Doctor's circle of friends is changed up, so the first run of episodes in the 50th anniversary year should be markedly different.

Doctor Who returns to BBC One and BBC HD on Christmas Day.

My money is on Clara the new assistant, being distantly related to Oswin a la Gwen from Torchwood and Gwyneth from ‘The Unquiet Dead’.
I think he’s going to meet her and take her on adventures because he feels bad that he couldn’t save Oswin! It’s SO sad! *CRIES HYSTERICALY*