THE PERKS OF BEING A WALLFLOWER- Review 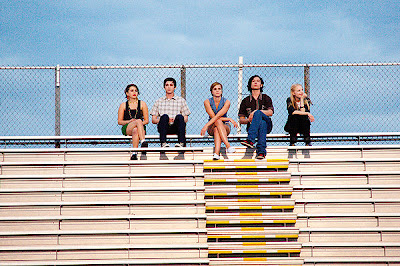 When I'm out and about, as my mild-mannered, non-blogging alter-ego, I'm occasionally picked up on being "that film guy" by folks who are out on the town at the same time as me. The two most common discussion points of the last fortnight have been "What did you think of the new film with Gandolfini in it?" (I've seen it, but haven't reviewed because I haven't had the opportunity to see it a second time) and "Why have they ruined Perks by changing Sam into Hermione?"

The Perks of Being A Wallflower, the novel, was apparently a big hit with teens and adults, and it should hopefully come as some solace for readers that the film is written and directed by the author, Stephen Chbosky. Despite having not read the book myself, I'd still imagine that means it's faithfully adapted. In the early 1990s, Charlie is a deeply troubled teen who's just starting his freshman year at high school. He looks set to bury his head in classic literature, and remain alienated from his schoolmates, until his imagination is captured by step-siblings Patrick, a flamboyant performer who, in another, less kind world, might have taken up archery, and Sam, who is, mercifully, not the kind of Manic Pixie Dream Girl that populates lesser films than this.

You can practically hear the sound of a million eyes rolling when you describe this film. Near the beginning, Sam actually delivers the line, "Oh my God, I love The Smiths" in earnest. Whether or not the hipsters have appropriated it in pop culture, it remains that the film is otherwise relatively unburdened by the cringe-inducing mumble tropes, instead pitching itself as a well-written and well-acted teen movie that does exactly what it intends for its audience, by dramatising the struggles that seem important at their age. For those outside of the intended audience, it slowly emerges that the protagonist's troubles are rather more disturbing than most of the intended audience may share. 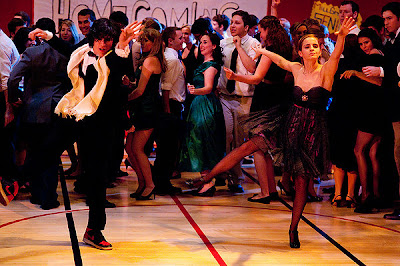 You see, for most of the film, the plot seemed to be coasting along just fine, aside from minor episodes with Charlie's depression. Although he is in some as yet unspecified turmoil, it's not like his family is abusive, and the presence of bullies in his school is understated. The film largely follows his awakening, and the process of being brought out of himself, by good friends, who are able to understand him on his own terms, (one of the eponymous perks) and whose company is, at worst, tolerable for any members of the audience who are older than the target age bracket. And it all works because it is, unexpectedly, building somewhere.

It's a far more canny use of exposition than many teen-oriented movies might have gone for, similar to how it actually took half an hour of mixtapes being exchanged on cassettes before I twigged that the film wasn't set in the present, but in the 1990s. The pay-off to Charlie's problems (which I wouldn't dream of spoiling here) isn't played as some schlocky plot twist, but as a development that gave context to any of my earlier quibbles. Like ParaNorman, it's a movie about understanding and tolerance that brings you in on the journey of the characters, to spellbinding effect. Logan Lerman is well suited to the lead role- he never plays Charlie as devoid of personality, but simply repressed enough that the freedom he discovers is rapturous.

The cast of characters that liberates him are very enjoyable to be around too, particularly Patrick and Sam. As Patrick, Ezra Miller is a world away from We Need To Talk About Kevin, with a story arc that avoids more obvious developments and comes to an entirely satisfying resolution, and equal aptitude with both the comic relief and the serious stuff. Emma Watson's American accent grates in the very first scene in which she appears, but, strangely, never afterwards. Either it only didn't work in that first scene, or it's easier to get used to than a typical bad movie accent, but irrespective of this, Sam provides Watson with her least eventful cinematic school year ever, and she seems to relish the chance to show off more range than ever before. 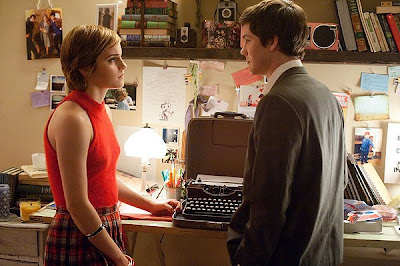 Now, none of this is to say that everyone will get as invested in The Perks of Being A Wallflower. Although there are comedic moments throughout, some of the straight-faced dialogue could drive a more cynical viewer to fits of unintended hilarity. But the performances from the young cast are excellent, easily breaking off from the baggage of Percy, Hermione and Kevin, and the entertaining script has an admirable aversion to spoon-fed exposition and a knack for storytelling that doesn't always go hand in hand with this kind of teen movie. Think of The Breakfast Club, a film that immortalises adolescent concerns, not clinically, but with a real interest and investment in that turbulent time of life. I enjoyed being taken along on this one, and I hope that fans of Chbosky's book enjoy it just as much.