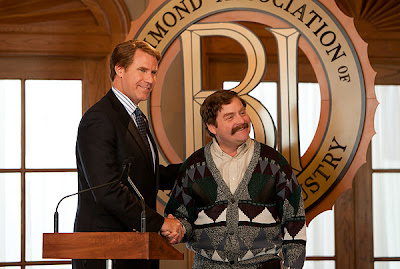 I've been interested in politics on both sides of the Atlantic since my college days, and the time seems ripe for a political satire that centres on the dick-measuring and oneupmanship that surrounds elections in the United States. There's a presidential election coming up in November, and from the 49% of Americans who apparently don't pay taxes, to the debacle that saw Clint Eastwood arguing with an imaginary Barack Obama, there's plenty for a smart, funny film to pick over.

Regrettably, The Campaign isn't that film, but can we hold that against it? The premise would seem to be well-constructed. Congressman Cam Brady has reigned in the 14th district of North Carolina for eight years, unopposed, until a series of scandals leaves him on shaky ground. Unfortunately, at the very same time, a corrupt pair of sibling industrialists bring in a local stooge, Marty Huggins, to challenge Brady, leading to an absurd contest to try and win over the electorate.

While Will Ferrell hasn't become one of the biggest comedy stars in the world for his keen instinct for political satire, anybody who has seen George W. Bush: You're Welcome, America, the stand-up show in which he impersonates the former President, will know that his casting as Cam Brady could have been pure gold. Alas, with only some of the bravado that made Ron Burgundy so popular, it could be any of a number of Burgundy knock-offs, which usually appear in the kind of film where Ferrell gives less thought to delivering funny lines as to shouting them. I think that by now, we're narcotised against him merely shouting for laughs. Meanwhile, Zach Galifianakis re-purposes his Seth Galifianakis character for Huggins, and is otherwise characterised much the same as any other Galifianakis man-child. 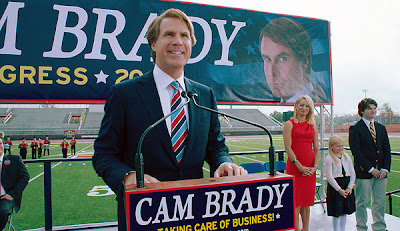 Brady is a hybrid of personality traits usually associated with blow-hard Republican candidates, but the film casts him as the Democratic incumbent, while the naïve Huggins seems to be Republican by dint of being backed by corporate baddies, with John Lithgow and Dan Aykroyd playing pastiches of the Koch brothers, which actually skew closer to the Dukes from Trading Places. It's not the most nuanced way of portraying the flaws with the two-party system, which are as apparent in the media as ever- when you put a libertarian like Clint Eastwood, who is socially liberal and economically conservative, on one side of the system, you wind up watching him talk to a chair for ten minutes. That's funnier than much of what The Campaign has to offer.

Director Jay Roach was behind Recount and Game-Change, acclaimed HBO films about American politics, but this one is far closer in tone to his more commercially successful films, the Austin Powers films and Meet The Parents, stacking ridiculous happenings on top of one another and expecting the laughs to keep rising. Brady and Huggins are both dumb, even if the former is more experienced, and so there's no one to play the smarter straight man with any meaningful presence. Jason Sudeikis, who does a cracking impression of Mitt Romney, is around as Brady's long-suffering campaign manager, Mitch, but he does little to ground the escalating stakes.

I don't want to be completely down on it, because I'm very aware that this isn't In The Loop, and it sounds like I'm holding that against it. I like Ferrell, and I often find the smarter aspects of his humour to be laugh-out-loud surreal. True to form, this has a couple of those moments, although one of them will clearly be dated just as soon as the next Best Picture winner at the Academy Awards becomes a bigger talking point. More importantly, there are some jabs at an electorate who are complicit in this circus- Brady and Huggins are constantly doing stuff that would end any normal politician's career, if we really stopped to think about it. The laughs come from the way that the film presents this kind of thing as acceptable to North Carolina's voters. 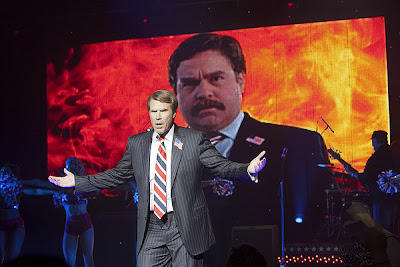 The Campaign is the wrong movie at the right time, but I'd be lying if I said I didn't laugh at all. You're Welcome, America suggests that this could have been far more incisive, without forsaking the usual sense of humour that runs rampant in the finished product, and Galifianakis the character now seems to be walking from one big-screen occupation to the next without missing a beat, but they, at least, gel together. Most disappointingly, it doesn't stick the landing, ending in a way that betrays its earlier cynicism and bite as affectations, for the sake of closure and a warm feeling inside. It's only sporadically funny, so if you want to vote with your wallet, you don't necessarily have to see it in the cinema.