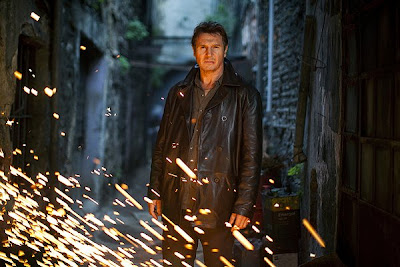 Taken was one of the biggest surprises of its year, delivering a tour-de-force PR campaign that completely reversed the film's fortunes, after an early online leak ensured that even Liam Neeson's nephews had seen the film illegally, ahead of its allotted release date. It's a grimy little B-movie, elevated by a world-class actor whose deadpan performance fired him into the action movie A-list, and it reaped the rewards of the good word of mouth at the box office.

Inevitably, Fox set a thousand monkeys to work on a thousand typewriters, in the hope of recreating a similar thrill. While Taken 2 is certainly more anticipated, it's not necessarily a better film than the original. A year after going to Europe to rescue his daughter Kim, and killing or torturing everyone he encountered along the way, Bryan Mills is now faced with the reality of his little girl growing up, learning to drive and even getting a boyfriend. But it seems that he didn't kill enough people in the first one, because a family holiday in Istanbul is derailed by the vengeance of Murad and his men- how can the same shit happen to the same guy on a different continent?

The thing about Taken is that it doesn't stand up to scrutiny, and so, expanding the world for the express purpose of creating more Albanian characters for Bryan to punch, kick and kill (in a 12A fashion) makes this sequel even less sturdy. The decision to aim for a younger audience, purely because Taken was probably popular enough to have been seen on DVD and telly by a younger audience than was intended, hobbles the film, and takes out some of the bluntness that action fans appreciated in that first film. Once again, director Olivier Megaton goes off with more of a whimper than his name would suggest. 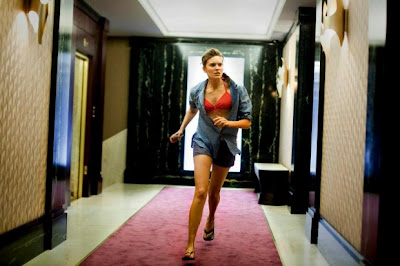 Even with the staggered pace of the first half hour, which is proportionately about the same amount of build-up as we saw in the first film, Taken 2 seems to speed along. This isn't to say that it's hugely energetic, but rather more like most of those concerned have somewhere else they'd rather be. I've been saying for most of the year that I expect Neeson's busy schedule this year to accidentally overlap at some point, expecting Bryan would show up in a scene wearing his naval cap from Battleship, but there aren't many other places to take the character. With Neeson on auto-pilot in this way, I can now understand how he had time to juggle Zeus and Ra's al Ghul this year too.

Despite its star's concerns that a sequel would seem a little bit contrived, the script that he signed up to do isn't the most original setup either. In fact, I'd wager that Neeson's main reason for liking this script is the expanded role for Kim, played by Maggie Grace, which is by far the most interesting development since the last run around. Famke Janssen slides into the thankless role that Grace previously had, but it was fun to see Kim resolving to help rescue Bryan, when it's her parents who are taken for a change. Maybe that's simply because Bryan's sense of direction is fuelled by grenades, thrown around the city at random by Kim, but that's neither here nor there.

Murad, played by Rade Serbedzija, has a couple of interesting scenes with Bryan when they come face to face, in which he challenges Bryan with pictures of victims that he doesn't even recognise. It calls back to the most memorably nasty scene in Taken, by pitching Murad as the bereaved father of the man that Bryan strapped into an electrified chair until the power was cut off. Typically, the film doesn't trouble itself with these issues of conscience for long, and a film that was as unassuming as its predecessor wouldn't have raised them at all. And worse, given how little development the baddies had in part one, we still know little more about the antagonists than "they're Albanian." 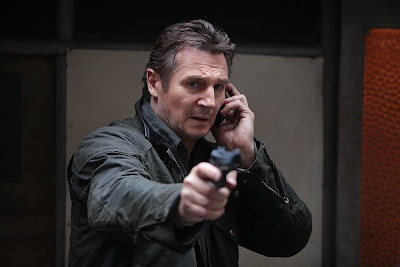 Taken 2 is a perfunctory follow-up, in the manner of 1980s sequels such as Another 48 Hours- the same again, but a little bit different. It has all the blemishes that come with a desperate attempt to recreate the alchemy that made the first film into a sleeper hit, with the result being that it certainly won't stand up as well. While the fun depreciates, the xenophobia is amplified, and the film comes to a shuddering anti-climax so inept as to make you wonder if they read the script back from the beginning, before shooting. There are some new bits to lampoon and talk about afterwards, but criminally, there's nothing to rival Neeson's iconic phone monologue, and thus, no reason to indulge in Taken 3.

I'm Mark the mad prophet, and until next time, don't watch anything I wouldn't watch.
Posted by Mark at 15:04