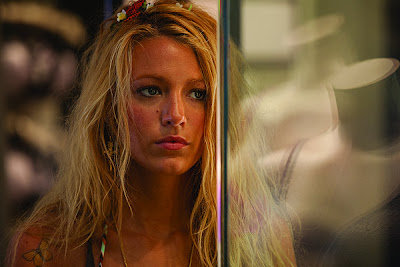 Just because I'm talking about this film now, it doesn't mean I'm going to like it at the end of the review. It's that kind of review. This one has taken a while to write, considering that I finally saw Savages on Monday, and it's been out for a good week or so before that. The question of whether or not it's any good is based on whether or not you go to the cinema to enjoy yourself, or to react to whatever it is you watch.

Oliver Stone's directorial career has been built upon provocative films, and here's another one to add to the list. It's narrated and book-ended by Ophelia, (she prefers "O") who's in a blissful menage a trois with Ben and Chon, California's most successful independent distributors of marijuana. Their idyllic lives are threatened by a Mexican drug cartel that is moving up north. They want to work with Ben and Chon's business, but when they refuse to co-operate, a violent stand-off begins, with O caught right in the middle.

After the gummy chewing of current affairs that was his Wall Street sequel, Stone digs back into more violent crime, and seeks to ingratiate the audience via a group of kids who are averse to the violence of their trade. In the earliest movement of the film, O simpers about what a cool dude Aaron Johnson's Ben is, using his profits to help out villages in the Third World, and yet she's also attracted to Taylor Kitsch's war veteran, Chon, who deals with the unavoidably gruesome side of their otherwise clean business. It's all too idealised to last, and I'm not entirely convinced it lasts as long as it needs to. 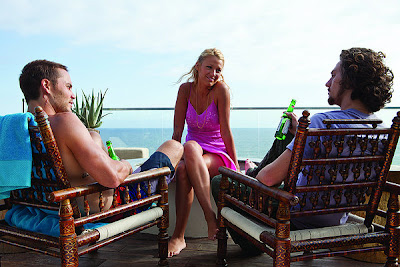 O, played by Blake Lively, actually compares their living situation to Butch Cassidy and the Sundance Kid, and herself to the Katharine Ross character, before all goes to shit. Avatar gets a passing mention in that same scene, and it's hard to believe that Stone was entirely oblivious to the fact that the setup is neither as likeable as Butch Cassidy and the Sundance Kid, nor as believable as Avatar. It's closer to the lurid Domino, a film with which it shares a cinematographer, than anything else. Lively, who still has one of the most ironic surnames in movies, is a big part of the problem- instead of playing her as a Cloudcuckoolander, she seems to have delivered all of her narration while pouting, with a cadence that ultimately irks more than it smoulders.

There's also some terrible dialogue for her to get her teeth into, largely based around invariably cringey puns, ie. "I had orgasms, Chon had WAR-gasms." If there's a redeeming quality to the way that O is portrayed in this movie, as a needy, spoilt little girl who's having her cake and fucking its friend as well, it's that Stone treasures their optimism. He clearly remains deeply cynical about it, in the manner that the story unfolds, but he crashes his movie into a brick wall by the ending, just to guard that optimistic idyll. The conflict is strangely compelling- I would have loved to see his version of Twilight.

O's beaus are played pretty straightforward by Johnson and Kitsch. The former is more overtly corrupted by the things that transpire in Stone's world, while the latter, now reaching the end of a rough year at the box office, is better used here than he has been elsewhere, even though I liked his leading man turn in John Carter more than most. Even John Travolta lends surprisingly decent support as Dennis, a corrupt federal agent who slimes his way through various allegiances. Elsewhere, the violent element is held up by Salma Hayek, in an unconventional and superb role as the cartel's ruthless leader, and Benicio del Toro as her terrifying henchman, Lado.

The portrayal of Lado might be the most troublesome thing about the movie. He's certainly the coolest character, and everyone, from Stone to del Toro, knows it. He's also a murderous rapist, and the fact that we're supposed to side with O and co combusts alongside the issue of him being a much more interesting, ferociously watchable character. I didn't side with Lado, but there was no point where I felt that Stone found him repulsive, especially given his role in the dopey conclusion. This mix ensures that the film is never boring, but it does often feel off-tempo, right up until it completely loses it, right before the credits roll. 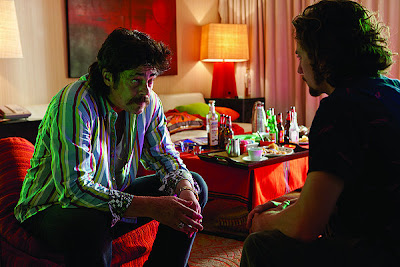 Savages is a deeply unsympathetic crime film, which still holds the starry-eyed optimism of its lead characers in an entirely unexpected esteem. There's a political point in here about the legalisation of marijuana, and Stone uses these characters, and the fates that befall them, to make that point. No one who sees Lado ripping through the film could then conclude that Stone's fondness for these protagonists means that he's going soft, but something gets a little lost in translation between Blake Lively's irritating performance and the cringeworthy dialogue. However, I've certainly seen far worse films in the cinema this year, and at least when Stone makes this kind of film, he has a point to make.