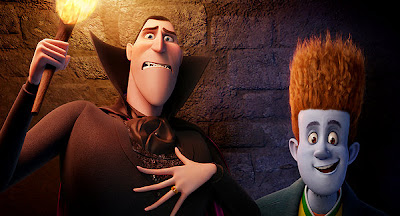 Hotel Transylvania doesn't have the Happy Madison banner above the title, but it's more bearable than anything else that Adam Sandler and his troupe of mates have churned out in live-action in the last decade or so. It's a project that's been around since 2006, but perhaps what makes it so endearing is not that it's actually an Adam Sandler film at all, but that it's wound up being the debut feature of Genndy Tartakovsky, who brought us such strange and brilliant stuff as Dexter's Laboratory.

The premise is pretty simple, arriving just after ParaNorman and just before this week's Frankenweenie. Its horror genre literacy is largely based on the iconic monsters that starred in the classic Universal monster movies, and a resort setting in which they can hide from their dreaded human persecutors. So, as he prepares to celebrate his daughter Mavis' impending 118th birthday, Count Dracula welcomes his old buddies, (Frankenstein, the Wolfman et al) and their families to his hotel. But the unexpected arrival of a backpacker called Jonathan sends him into a tizzy, especially when Mavis hits it off with the young human.

Although the film may not be kindly regarded by some, in the light of stop-motion horror movies for families glaring from either side of its release date, it's surprising that a project that has gestated for so long, and still comes to the screen with an implied debt to the plot of Monsters Inc., turned out so well. Tartakovsky was the sixth director to be involved with this film, and he's summed up the overhaul that he administered in an interview- "I took all the aesthetics I like from 2-D and applied them here... I don't want to do animation to mimic reality. I want to push reality." This sensibility, which is very much on display throughout the film, differentiates it from other CG-animated movies of its ilk.

The script, which comes from writers Robert Smigel and Peter Baynham, is a tad repetitive. Following his writing duties on Arthur Christmas, Baynham takes another seasonal focus and thoroughly mines it for comedy, and while Tartakovsky isn't Aardman's equal for background comedy, it does feel like a lot of his visual style and humour is there to bolster some of the shakier aspects of the script. Taking a predictable arc between Dracula and his daughter's potential paramour and cycling it throughout the running time isn't any more surprising than stretching it to fit.

Sandler gives it all the Bela Lugosi he's got to offer, as the prince of darkness, and one of the better gags in the script involves Dracula's bemusement at his representation in the real world, having never exclaimed "bleurgh" in his life. The other standout character is Steve Buscemi's Wolfman, who's slowly going crazy as a result of his demanding litter of were-pups, but he remains in the background for much of the film, which is all the better for sight gags. Andy Samberg, Selena Gomez and Cee Lo Green give likeable voice turns, (particularly Green's Mummy) except when you realise that two singers were cast so that the cast could do a lame rap music number before the credits. Worse still, it's AutoTuned to shit, to compensate for the dubious singing talents of those cast members who don't sing for a living. 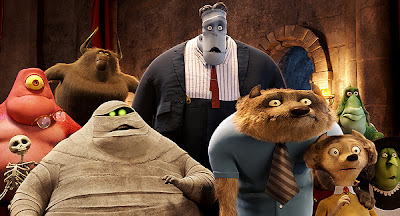 But aside from that truly scary stuff, Hotel Transylvania is an entirely passable comedy for a younger audience. After Eight Crazy Nights, I wouldn't have bet on Sandler being more likeable, or, at worst, more bearable in animated movies, but here we are. Hopefully, its success will lead to Genndy Tartakovsky being granted his own original animated project, so that he can continue livening up the medium as he does here. The film's plot certainly nothing as profound as Monsters Inc, but Tartakovsky brings enough flair and ingenuity to the table to mark it apart from the other animated horror movies this month, if not quite enough to mark it as better.