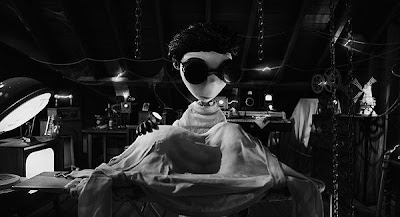 It took a couple of years, but we finally found a reason for Tim Burton's Alice in Wonderland to exist. When you make a hit that big, the studio who benefits from it the most will likely reward you with a passion project, just as Warner Bros did with Charlie and the Chocolate Factory and Corpse Bride in 2005. As Alice was a much bigger hit than Charlie, Frankenweenie is proportionately even stranger, as a black-and-white stop-motion movie about resurrecting the dead.

Young Victor Frankenstein lives in the small town of New Holland, more interested in science than making friends. His only real friend is his trusty dog, Sparky, but during a disastrous attempt to appease his dad by playing baseball, Sparky is ran over and killed. Initially devastated, Victor is inspired by the lessons of his eccentric science teacher, and sets about trying to revive his beloved dog with electricity. When the experiment succeeds, it's harder to keep his experiment secret, especially with his jealous classmates sniffing around.

Even though Frankenweenie is about as tight as Burton's other narrative features, ie. not very, the most surprising thing about the film is how successfully it expands upon the live-action short film that marked his departure from Disney. This is largely achieved through the addition of a school science fair B-plot, in which a number of other kids from Victor's class, with reliably bizarre character design, set about planning to electrocute creatures too, wrongly suspecting that the young scientist is planning to show them up with his undead dog project. Seeing as how that wasn't in the original film, I won't go into more details about how this affects the film's new finale. 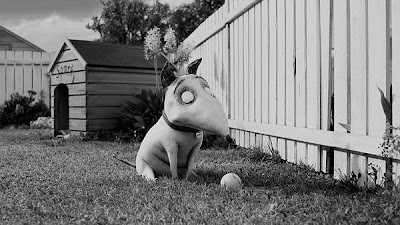 The reason it should be mentioned, however, is that is overtakes an intriguing aspect of the original film that still gets a bit more exploration in the new version, via the addition of Mr. Rzykruski, the science teacher, voiced by Martin Landau. The adults of New Holland seem to be in denial about science, when their kids start fucking up, shirking any responsibility onto some corrupting influence in the teacher's lessons. This comes through in a great scene at a town hall meeting, where Rzykruski tells everybody off for their ignorance. While your average Frankenstein story is about mad science, and the hazards of playing God, this is not your average Frankenstein story.

It's a subversion of the tale that manages to be cute and endearing, even why its characters look like Tim Burton sketches brought to life. From glimpses in the trailers, I had thought that some of the characters even looked too weird, almost frightening. Victor looks much like a younger version of his Johnny Depp-sounding namesake from Corpse Bride, which might put too fine a point on the idea that this misunderstood kid is the most normal of the lot. If my classmates looked like these kids, I would rather hang out with a dog too. But this isn't a mark against the unique production design, which looks all the better for being in black and white.

Naturally, it bears some comparisons to ParaNorman, another stop-motion film about a misunderstood kid who winds up attracting his peers, and a whole ton of trouble, when he indulges in the supernatural. With ParaNorman still playing, I hadn't expected this one to bear up to those comparisons, much less that it would actually exceed them. While I had problems with ParaNorman's third act, Frankenweenie does find some use for each of the many elements it juggles, at some point or another, as opposed to sidelining interesting characters. Even though it never gets around to exploring how Victor would develop, after cheating a childhood rite of passage such as losing a pet, it manages to cover the unexpected bonus of showing a dog that has to come to terms with his own mortality, which is much more welcome. 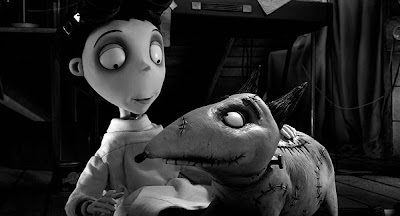 Frankenweenie finds Tim Burton on his best form for a long while now, contextualising some of his less-inspired studio work as a necessary evil- it's a shame that you don't get to make anything this weird and wonderful, much less under the Disney banner, without going through the "one for me, one for them" rotation. Films like this remind us of Burton's visionary quality, even though they also remind us that he's not the most disciplined storyteller. But like his very best works, it's funny, scary, stylised and utterly unique, which is no mean feat, given the recent abundance of horror films for family audiences.