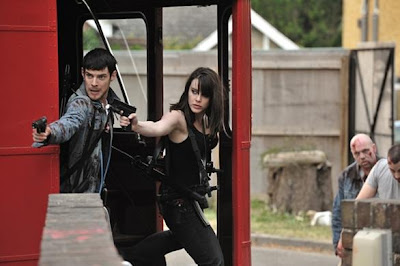 As with last Halloween, I've caught up on a recent horror comedy release for this most spooktacular of occasions. Nobody's called me on this, but I did find myself wondering if it might have been better to dig out a really, properly scary horror flick and chat about it, but then great horror, like great comedy, doesn't lend itself to recommendations that explain all that's good about it. However, good horror comedies are hard to find, and I reckon Halloween viewing should be more fun.

Cockneys vs. Zombies fits the bill, and shortly after a shamefully limited release in cinemas at the end of August, it's arrived on DVD and Blu-ray in time for Halloween. Co-written by James Moran, who gave us some gritty thrills in the recent Tower Block, it's a cheeky and clever romp through the East End of London, which has a nasty infestation of zombies. The rise of the living dead actually helps brothers Andy and Terry to make a clean getaway, after robbing a bank for the funds to save the care home where their beloved granddad, Ray, is living. But while these aren't sprinting zombies, not everyone can outrun them, and the brothers set about trying to rescue Ray and his elderly mates.

Most refreshingly, the film is never as arch as the title might suggest. It's not another in a long line of Shaun of the Dead or Zombieland knock-offs, and it's also far too smart to sink below the masses of zombie movies that go straight to DVD all year long. Indeed, I bet it benefitted from cinematic presentation as much as Tower Block did, albeit for different reasons. The film is a lot of fun, and I imagine that watching it with a big audience would be lots of fun. The script, by Moran and new screenwriter Lucas Roche, is packed with vim and vigour, with tonnes of smart and zingy dialogue to boot.

Given how so many zombie films centre around young'uns, with the less able or elderly disregarded, and left off-screen as so much chowder for the undead, the central conceit of evacuating the care home is a very good one, but in the telling, the film is smart enough to avoid wearing it out. The first half of the film is largely centred around the unfortunately successful bank robbery, and a cast of characters that includes a sassy Michelle Ryan, (channelling her character from EastEnders through a kick-ass heroine) a clueless Jack Doolan, and a genuinely mental Ashley Thomas, orbiting around Harry Treadaway and Rasmus Hardiker as Andy and Terry. It's very good during this time too, but the film really takes off once we witness Richard Briers shambling away from a zombie, clutching his zimmer frame and mumbling at his equally slow pursuer.

There's nothing mean-spirited about it, and the most capable characters are largely the elderly ones. In particular, Alan Ford plays up to his hardman image, but even in being the alpha male of his ragtag band of OAP survivors, there's real tenderness to his performance, and his character. The effect of this, and the interactions between the young cast and the older characters, is tremendously likeable, and a strong sense of humour is established from the situations that they get into, rather than being laid over the top of Cockney archetypes. The even hand exerted by both the scriptwriters, and director Matthias Hoene, places this several notches above other by-now bog standard genre comedies. 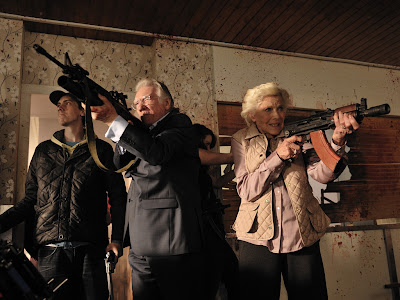 Cockneys vs. Zombies stands apart from its predecessors by avoiding the played-out route of hanging itself on genre tropes, instead framing a set of likeable characters and fun gags with the zombie apocalypse. As far as the traditional social commentary of the sub-genre is concerned, there's only passing lip service towards the redevelopment of the East End, but on the other hand, it has a superb use of the theme tune from Grandstand, which made me want to stand up and applaud. There may be far more laughs than scares, but it's hard to imagine anyone complaining about that. Happy Halloween, everybody!