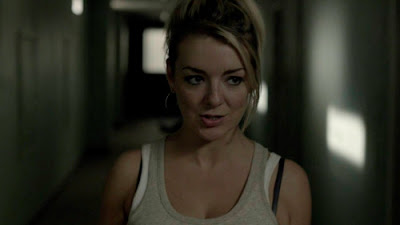 What the hell is it with this year and awesome high-rise siege movies? Whatever it is, I like it- after The Raid and Dredd comes the first movie of the year that actually takes place from the perspective of the beseiged inhabitants of the location, and it's called Tower Block. Hopefully, it will play for longer than a week in some cinemas, or the timing of this review will give you only a little time to check it out for yourself.

The film, written by Severance screenwriter James Moran, begins with a murder on the top floor of Serenity House, a tower block that has been marked for redevelopment. Nobody, except ballsy resident Becky, does anything to try and save the victim, and absolutely nobody talks to the police afterwards. Three months later, only the inhabitants of the flats on the top floor remain in the block, as they await re-housing by the council. However, one Saturday, an unseen sniper in another building begins to pick them off one by one, forcing them to rely on one another to survive the weekend.

While earlier films from this year have had the run of many floors, Moran restrains his characters on the top floor, with minimal contrivance. With such limited space, I have to admit that I expected Tower Block to run out of steam at some point in its running time. I also expected that the tyrannical bully, Kurtis, played by Jack O'Connell, would become a threat within the group of frightened residents at some point in the narrative. And most of all, I was expecting, or at least I was afraid that the wheels would come off after a very promising start. But hey, I'm sure there are others who will underestimate this film too. 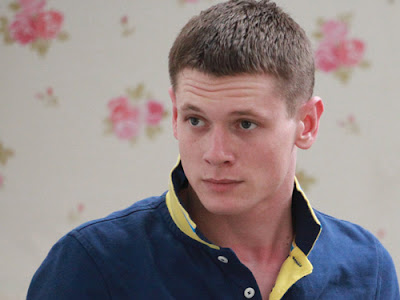 With some very strong direction from James Nunn and Ronnie Thompson, (who make a bigger impression here than in their collective back-catalogue of British crime flicks and horror movies) Moran's script is allowed to sing, and sure enough, it screeches its way through an enjoyable cacophony of high tension. The residents are never merely sniper fodder for the unseen baddy, and Kurtis is transformed as the film goes on. Pulling off what Skins never really managed with his character over two series, O'Connell gets an arc that really showcases his talent as an actor, winning you back from the seemingly irredeemable thuggery he displays early on, in much the same way as Moses and his gang started out bad in Attack The Block.

The other star of the show is Sheridan Smith, whose Becky is far more nuanced than the kind of Final Girl leading lady role that is usually embedded in this kind of film- House At The End Of The Street, take note. But, as mentioned, those other residents are well written and played too, and the supporting cast is made up of an assortment of recognisable faces from British telly and movies. Russell Tovey underplays it as a tragic alcoholic and Ralph Brown and Jill Baker bring likeable, reassuring presence to the table, as a retired soldier and his loving wife, respectively. Each of them have far more characterisation than usually goes into this kind of feature, but then it's just a surprisingly good thriller all around.

However, it's not entirely airtight. While the action and the tension are usually quick and involving enough to keep your mind from wandering, it's not hard to puzzle out certain twists if your thoughts should stray during the less exciting moments. If it bothers you that the identity of the attacker can be divined by process of elimination, then the ending may stretch the patience of some. Given how strongly the rest of the film hangs together, based on what has been set up within the story, and how it perseveres in all the areas where other films might have worn the premise beyond breaking point, it didn't bother me as much as it might have. 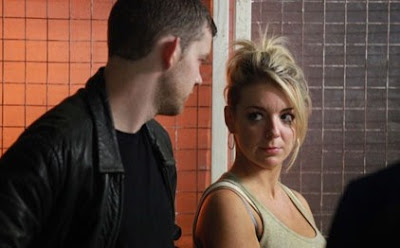 Tower Block should really be playing on many more screens than, say, House At The End Of The Street, or The Sweeney- examples of films that have similar ambitions to this one, but are utterly flummoxed when it comes to achieving them. With a script that hits all the right bases, some smart direction and a quality cast of actors and characters, this one is an assertive, if uncomplicated action thriller, with deliciously dark humour and psychological horror throughout. Refreshingly, it's also without the unwarranted mean streak that brings down so many films like this, and you should catch it in cinemas while you can.