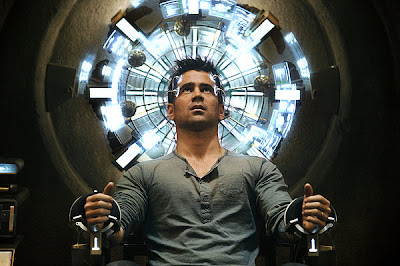 Looking at Sony's output this summer, disappointments like Men In Black 3 and The Amazing Spider-Man aren't going to do their bank balance any harm, grossing hundreds of millions of dollars all around the world. Their big flop of the summer, Total Recall, also happens to be creatively disappointing, and also suffers as a diminishing return to material that has previously been realised very well on the big screen.

Though taking the title of Paul Verhoeven's 1990 film, this version purports to be a more faithful adaptation of Phillip K. Dick's We Can Remember It For You Wholesale. Aside from the fact that Colin Farrell gets his ass to Britain, instead of Mars, it does seem like a lot of the beats have come from Verhoeven's film. Factory worker Douglas Quaid spends his days discontentedly assembling the robot police force that keeps the poorest of society in check. One day, he decides to splash out on some memory adjustment at a company called Rekall, planning to be implanted with memories of an action-packed life of adventure, but things don't quite go according to plan.

Apparently, Paul Verhoeven wound up directing Total Recall after Arnold Schwarzenegger, then the biggest star in the world, saw RoboCop, and having missed out on starring in that film, wanted to work with the director. Verhoeven's films were always more satirical than other sorts of action film that were being released at the time, with RoboCop's satire of military over-indulgence and arrogance being followed up by the original Total Recall's dreamy ambiguity. Pre-dating Christopher Nolan's Inception by 20 years, you can't be sure, by the time the credits roll, whether the events of the film have really happened, or if the inciting incident at Rekall merely plunged Quaid into an artificial fantasy, which is, after all, exactly what he requested.

Director Len Wiseman seems to be striving for that ambiguity in 2012's Total Recall, which is strange for a couple of reasons. Firstly, this isn't a remake, remember? It's an adaptation of the original story! It only happens to have the same title as Verhoeven's film, and the slightly desperate inclusion of nods and in-jokes about the original doesn't detract from that at all. Secondly, as you might have guessed from my facetious tone about this, the pandering to the original is supposed to be secondary to what someone, somewhere, thinks is a more mature take on a film that actually took silliness as part of its ambiguous approach. 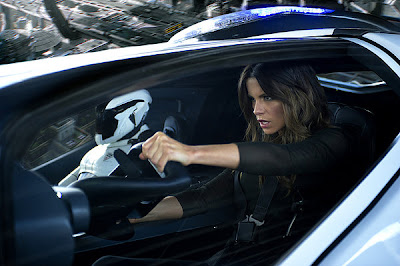 Never mind that I credit Verhoeven with a lot more depth than co-writer Kurt Wimmer, the man behind such sci-fi crap as Ultraviolet, because Total Recall is a bit limp, even without comparing directly to the original- a comparison which is, despite any protestations by fans of the new version, made entirely valid by the filmmakers' reverence to that film. In the times that it seems least real, it's all because it comes with the usual studio blockbuster disdain for physics, logic, and even common sense. It's so very straight faced, for the entirety of its running time, which only makes the duller stretches feel even more tiresome.

Then again, I didn't really hate, or even dislike the film either. It looks pretty amazing, and you can at least see that far more thought has gone into building the futuristic world than went into the script. I hail from Middlesbrough, so I know a Blade Runner knock-off when I see one, but there are enough neat little touches to distinguish the worlds of the United Federation of Britain and The Colony from the influence of that most quintessential sci-fi future. It makes a fine arena for all that jumping and fighting and shooting that goes on, but the characters are far less distinctive.

Colin Farrell does fine in the role of Quaid, more believable as an average guy than Schwarzenegger, even though the transition from average Joe to secret agent loses something without this average Joe being so massive and yet so impotent in the earlier part of the film. Kate Beckinsale makes a good fist of merging Michael Ironside and Sharon Stone's characters from the original film. Wiseman is Beckinsale's husband, and through the early Underworld movies, I've always enjoyed their husband-wife team-ups more than the products of Paul W.S. Anderson and Milla Jovovich, and this makes no exception to Beckinsale's often under-appreciated talent as an action heroine, giving her an enjoyable, if sadly under-developed rivalry with Jessica Biel's character.

Bryan Cranston is shamefully neglected as the film's big bad, Cohaagen. As busy as he's been this year, with films and his Breaking Bad success, I was amused to discover that my dad, a huge Malcolm in the Middle fan, hadn't seen him in any of the new stuff until now, and was thinking of Hal all the way through. That Cranston has dispelled just about everyone else's memories of his sterling work on that series, whenever he's doing more serious fare, should tell you how little he's given to do here. Beckinsale makes a fine antagonist on her own, but the film lacks something overall in the absence of the main baddy, no matter how many overlong action setpieces are thrown at the screen. 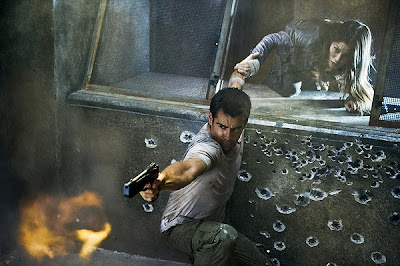 Total Recall is a disappointing mix of some stunning visuals, some undercooked characterisation and a whole lot of stuff that's merely remembered wholesale from the 1990 film. There are occasional glimpses of a more distinctive film, where the story was worth reinventing, but largely, you can't help but compare this to last summer's late August remake of an Arnie movie, Conan the Barbarian. It's a more enjoyable film than that one, with a better cast and better special effects, but it still fits into a trend of unnecessary remakes that is far bigger and more perturbing than itself.