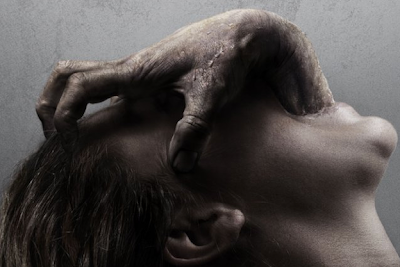 I've included a section of the poster for The Possession above, because it demonstrates how something can be less scary as a still image than it might be in the context of a live action movie. Certainly, this extreme version of a facepalm made me giggle when I first saw it, and with the involvement of Sam Raimi, and his Ghost House Pictures, I had assumed that it was going to be more than the standard demonic possession film, and something more along the lines of the howling, hysterical horror comedy, Drag Me to Hell.

Director Ole Bornedal's film is far more straight-faced than the type of film that Raimi puts out, but neither is it a bog-standard addition to an over-stuffed sub-genre. Whether it is, as it purports, based on true events or not, makes about as much difference as it does in any other horror film that claims that inspiration. Clyde Brenek is a high-school basketball coach who's planning to move for work, away from his estranged family, when his youngest daughter Emily becomes infatuated with a wooden box that he buys for her at a yard sale. It transpires that she has a friend, who lives in the box, and that friend is a dybbuk.

Beginning development with the far more distinctive, and yet probably less commercial title of The Dybbuk Box, The Possession deals not in the gribblies of Christian mythology, but instead broaches the concept of a Jewish demon. The only recent film I can think of that even mentions dybbuks is A Serious Man, with the warped, seemingly unconnected prologue that served as the Coens' idea of a Looney Tunes short before the main feature. Still, its seldom-covered topic would come to naught if this film just applied the tropes of films about Christianity to a film about Judaism. 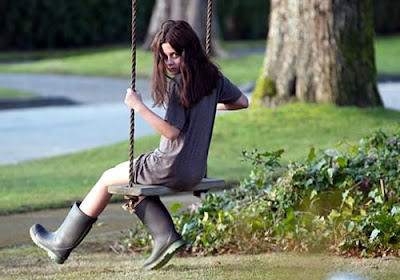 Instead, it's an oddly schizophrenic piece. There are glimmers of that terrific sense of anarchic comedy that comes so close to Raimi's sensibility in the Evil Dead series, or Drag Me to Hell, but it's difficult to tell whether or not some of these are unintentional. I love the supporting actors that tend to feature in films with Raimi's name in the credits, because everyone gets a chance to make their mark in some peculiar way, no matter how big or small their contribution. It's played pretty straight, and so the demonic facepalm, which was so funny to me as a poster, is rather more horrific in context, when we're forced to consider the hand's passage from inside Emily.

As daft as it might be, this is a film, like many of its forebears in the demonic sub-genre, that pivots around the casting of the child actress who becomes affected by supernatural goings-on. In that regard, young Natasha Calis brings her A-game as Emily, excelling in both the inevitable super-charged temper tantrums, and in the earlier scenes, where her rapport with her father is both funny and sweet. In the role of Clyde, we have Jeffrey Dean Morgan, that genre stalwart and fan favourite who has often reminded me of a cross between Bruce Campbell and Robert Downey Jr.

He fares well in the role of a father who can't seem to do right for doing wrong, even if it's he and Calis holding up the family angle on their own. Kyra Sedgwick and Madison Davenport are constantly present as Clyde's ex and eldest daughter, respectively, but seemingly have very little to do in the course of the plot, except to obstruct Clyde, and otherwise bitch at him. Far more useful is a rabbi, played by Matisyahu. With his other career as a Hebrew reggae artist, Matisyahu fits in just fine with the other more peculiar Raimi casting choices, and invigorates the film right at the point when it starts flagging.

The problems with The Possession bring it down though, and for one thing, I'm not sure what editor Eric L. Beason was playing at, with his constant cuts to black. This leaves the film bereft of any momentum that it might be building up, with the early tension and inevitable jump-scares. Added to this, there's a distracting over-use of Google Earth-esque establishing shots, often right after the film has been dunked in cold water by those pesky blackouts. The effect leaves the film zig-zagging between the hysterical and the pedestrian, in a way that will alienate as many viewers as it enthralls. 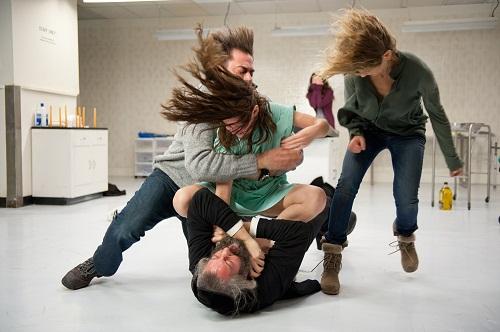 I still can't be sure why studios empty their shelves of mid-range horror films like this in late August, rather wait for the run-up to Halloween. As one of many in the market, The Possession is a better film than many of the demonic possession movies that are flooding the market, though its rather obvious title will surely help with an easy sell to fans who like that kind of movie. You can also view it on its own merits, which include good performances from Morgan and Calis, and a couple of really ingeniously mounted spooky scenes, which ultimately prove more memorable than when the film is taken as a whole.

I'm Mark the mad prophet, and until next time, don't watch anything I wouldn't watch.
Posted by Mark at 13:00

This movie reminded me a lot of The Last Exorcism which I saw a couple of weeks ago on my Hopper using Blockbuster @Home; there were times when my hair stood up on end because of the creepiness. I think the part that was most creepy for me was seeing the demon on the MRI. I watched it with a few Dish coworkers and one of them said the creepiest part for her was how Emily looked while on the swing. I would like to see the movie again, but I’m more than okay with waiting for it to come out on DVD, which is why I’ve added it to my Blockbuster @Home queue. This movie definitely ruined yard sales for me.

I'm currently on strike—from yard sales, not from being scared silly. I've written a book entitled Writer's Block: The Possession, the first book in my Writer's Block trilogy that your review practically mirrors in a way. Oh well, I'll just keep reading because obviously I love to be freaked out. The movie was awesome, guys! Here's to more scares in literature AND the movies.