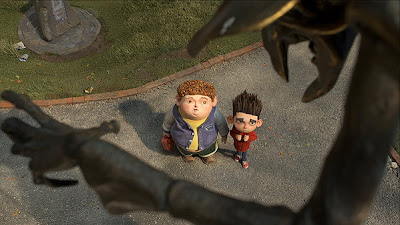 Between reviews of Doctor Who and the spate of horror films aimed at children in recent years, I think that this blog has made it abundantly clear that there should be more daring and scary films for a family audience, so I shan't stress the point. Plus, ParaNorman shows that we're clearly getting that kind of film anyway, especially when it comes to the output of animation studio Laika, who previously had a big hit with Coraline.

While that film drew from Neil Gaiman's novel, this one is based on an original script, but with more homage to horror movies and the gruesome pre-occupations of children, than actual horror. I'll explain how this is a good thing in due course, but I mean to say that the film's hero, Norman Babcock has the ability to communicate with the dead, and is alienated by his friends, his family and just about everyone else in his small town, Blithe Hollow. The town is famous for a witch hunt that happened three centuries prior, and Norman is suddenly bequeathed with the duty of protecting the village from the witch's ancient curse.

I have no idea of what anyone at Laika has planned for the future, or how they'll figure into Universal's recent announcement that they want to keep releasing two animated films per year. What I can say is that I hope they keep making horror movies, partly because so few others are doing that with a young audience in mind, but mostly because they're really good at it. I'm not sure what it is about stop-motion that lends itself to animated horror so well- we've had Coraline, Corpse Bride, and even Aardman's big-screen Wallace & Gromit in The Curse of the Wererabbit was a pastiche of Hammer horror.

As pointed out in Monsters Inc., a decade ago, kids just don't scare as easily any more, a fact that Laika seems to appreciate. That's probably why so much of the horror in ParaNorman relates back to the anxieties of being a kid. Although it has an appreciation and grasp of mondo movie-making that is both admirable and enjoyable, it recognises that it's far more scary to be isolated, or bullied, even within your own family. He's entirely comfortable watching old horror movies, and conversing with ghosts, but there's a great sadness to him that feels uncommon in the protagonists of animated movies. 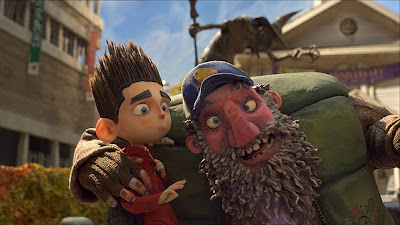 Writer and director Chris Butler takes the notion that we fear what we don't understand, and runs with that theme in many more different variations than you'd expect. ParaNorman is a hugely subversive film, not only in its kid-friendly approach to the historical shame of witch hunts and the terror of a zombie uprising, but in the unexpected way that our sympathies are drawn. The pivotal twist in the film is a marvellously executed and heart-wrenching sucker punch that you really won't see coming, and it leads to a really beautiful sequence that might not have been suggested by the earlier, funnier antics.

While it's funny, it's a darker brand of humour than Pixar or DreamWorks usually dish out, with none of the frantic or noisy pace that typifies the latter's productions. Its strength is in its likeable characters, and the comedy comes from their personalities and quirks, rather than laying the tropes and genre parody on top. It's never more effective than with Neil, a fat kid who becomes Norman's one and only friend. Aside from being funny, he's also fiercely defensive of Norman, in a way that he has never been about himself.

If there's one minor problem with ParaNorman, it's that it takes a lot of time to establish Neil, and his older brother Mitch, and Norman's older sister Courtney, and school bully Alvin, and ultimately doesn't give them a lot to do. It's entirely in keeping with the theme of isolation, that Norman has a lot to do by himself once the dead rise, but it's also disappointing that we see less of Neil, in particular, as the film goes on. I also expected the presence of Norman's ghostly late grandmother to have more significance than an early set-to between Norman and his confused father, but she simply drops in and out of the film after an enjoyable introduction. It's possible that the story is so good, and the theme so resonant, that Butler couldn't quite find a place for all of his characters within it. 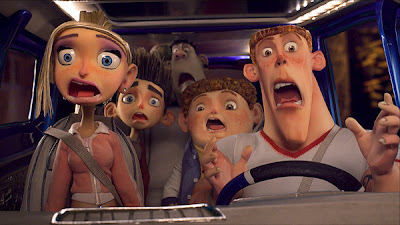 Understandably, given the younger audience, ParaNorman is more of a film about horror, than a horror film, and yet it's still designed to be the most relevant horror film that a young audience could see. It puts them in the shoes of a kid who's misunderstood, and isolated, and, at worst, bullied, and imparts a message about understanding in a hugely entertaining way. By appealing to the more gruesome factor while also building great, if occasionally underused characters, this is a roaring success that never seems too hurried or frantic.