HOUSE AT THE END OF THE STREET- Spoiler Review

This review contains some SPOILERS. If you're planning on seeing House At The End Of The Street, er... don't, but also don't read on just yet. 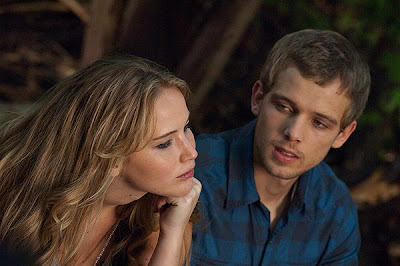 Jennifer Lawrence is one of the biggest rising stars of the last few years. She has a few of those major milestones for a young actress under her belt already, having garnered an Oscar nomination, and starred in a comic book movie, but now she's also done the low-rent teen thriller. House At The End Of The Street was pegged for an April release in the US, but there was a delay and a fundamentally altered marketing campaign after its star killed a load of kids in a movie that made over $400 million.

Make no mistake, whatever this once was, it's now an opportunity to cash in on the popularity of Katniss Everdeen. It's being marketed as a supernatural horror film, but it's really much closer to a teen thriller. Elissa and her mother move to rural, small-town America, having caught a bargain on a house that happens to be next door to the scene of an infamous crime. There, Elissa becomes intrigued by their sole remaining neighbour, Ryan Jacobson, whose parents were murdered by his younger sister. Despite her mother's protests, she grows closer and closer to him, and almost comes too close to realise the terrible truth.

Although I always believe that it's important to separate bad marketing from bad films, (considering how The Grey is one of the very best films of the year, and has a misleading ad campaign that actually shows the final scene of the film in order to sell it) but it's prudent to talk about both in this case, because they're both bad in different ways. Given how Relativity Media is opportunistically trying to make it look like they hooked the biggest female star of the year in a horror film, a genre that typically does very well with Lawrence's demographic, there's still little about the trailer and poster campaign that made me want to see this. 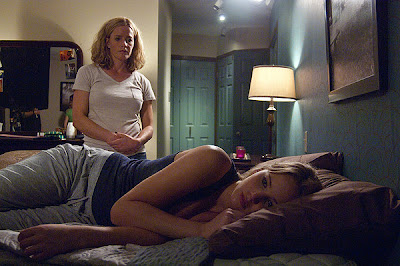 But given how it's not a horror film, and the trailers misrepresent it, the film itself is a whole other level of badness. There's little doubt in my mind that it would have went straight to DVD, if its leading lady weren't such a big star. Certainly, it's the worst performance I've ever seen Lawrence give, which is a shame, because I usually think she's terrific. There's also little excuse for another Oscar nominee, Elisabeth Shue, to be so shamelessly squandered. Elissa and her mother have little in the way of chemistry, and the script is so ropily assembled as to make many of their scenes together, especially the ones in which they argue, seem bi-polar.

Take one pivotal scene, in which Elissa's mum invites Ryan over for dinner. You can tell that Shue is getting plastered, even though she's fine one minute and drunk the next, because she takes one sip from a great big wine glass. Lawrence, who's not drunk, has an equally massive mood swing. It's at this point that you realise where you've seen this before- a teenage girl, moving to a small town with her single parent, becoming instantly popular with her high-school buddies and, crucially, falling for a brooding, secretive young man who lives in the neighbourhood? Well, damn, now I have to give it credit for showing some semblance of how Twilight would actually go down in real life.

You see, when Elissa's mother, and everyone else around her, is warning her off Ryan, who's played with typical blandness by Max Thierot, it's not just because his family gave him the murder cooties, or something. It's not catching, unless of course you were more involved in the deaths of your parents and disappearance of your sister than would first be apparent. I promised some spoilers above, but that's only because showing the alchemical root of this tosh is enough to help you figure out the much-vaunted twist ending- House At The End Of The Street is basically a mix of Twilight and Psycho.

It's a surprising decline for director Mark Tonderai, who started so promisingly with the 2009 British horror film, Hush, which ratcheted up the tension as it moved around the country's service stations at night. Then you find out that the film's story was brought to us by the genius who brought us Surrogates, and the script from the author of the similarly house-based pot-boiler, Dream House. Between them, they indulge in endless drudgery about a battle of the bands that we never see, and a bunch of boys who seem so much worse for Elissa than Ryan, even after his little eccentricities are uncovered. 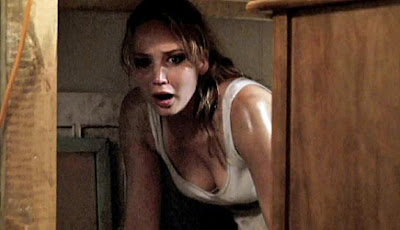 Although the word of mouth must have got out by now, it bears repeating. House At The End Of The Street isn't a horror film, except as a cautionary tale about studio opportunism in the cinema. If it succeeded on the terms by which it was so obviously made to start with, as a thriller, then I would have been less annoyed- instead, it's languid and limp, with endless build-up for a minimal return. It's not even so unaware as to be unintentionally funny, but it's still a risible effort, which seems content to get as far as it can by imperilling two Oscar-calibre actresses in wife-beater tops, and it onlyseems like both of them left their considerable talents at the door.