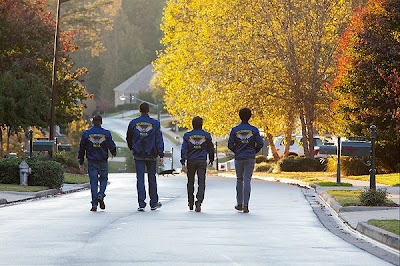 Putting aside the whole neighbourhood watch controversy, it seemed the biggest, most unlikely development in this film's journey to the screen was the fact that it involved aliens. Was I the only one who didn't realise aliens were involved at all, until I saw a trailer around a month ago? I'd seen trailers before that, but until late in the campaign, it almost seemed like aliens had simply been parachuted into another raunchy comedy. Unfortunately, that's much the same effect as you get when you watch the whole film.

The Watch starts out in Glenview, Ohio, where local busybody Evan Trautwig is an outstanding member of the community. When a security guard is murdered at the supermarket of which Evan is the manager, he starts up a neighbourhood watch group to try and track down the killer. His motley crew, comprising an over-protective father, a sociopathic high school dropout and Moss from The IT Crowd, instead stumble upon an alien plot to destroy Earth, starting in their small town and spreading all over the planet.

On the whole, this feels like another attempt to mix up the fantastical with the mundane in the same way as Edgar Wright and Simon Pegg have managed so masterfully in films like Shaun of the Dead and Hot Fuzz. This formula is mixed up with the raunchy, R-rated comedy style that has proliferated in Hollywood over each and every summer season since Wedding Crashers broke out in 2005, and sure enough, Vince Vaughn is in this one too. The effect of mashing these two disparate comedic styles is roughly like Attack the Block, but with privileged, 30-something Americans standing in for disadvantaged teens. Yep, really. 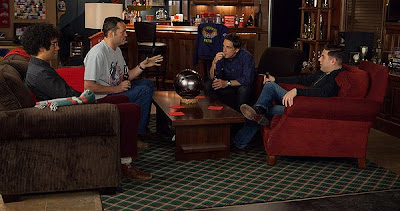 Seth Rogen and Evan Goldberg actually made a good stab at this brand of deadpan genre parody in Pineapple Express, but it's telling that although Rogen co-wrote the script, he's not actually appearing in this one, unlike his other writing collaborations with Goldberg. Instead, we get Ben Stiller and Vince Vaughn taking up the lead roles- you can pretty much repeat my thoughts on Stiller's performance in Tower Heist and any number of other comedies for his turn here, and I've long disliked Vaughn's fast-talking dickery too. Once again, they're playing immature, relatively affluent suburbanites who are far less likeable than they may appear to the filmmakers.

Jonah Hill and Richard Ayoade bring up the rear, and each draws more laughs with far less material than the leads. Hill has been having a good year, but suffers, much as the whole film does, for doing this after 21 Jump Street. The "ironic" hip-hop soundtrack and blustering bravado were deployed to great comic effect in that film, but this neighbourhood watch group doesn't come across as clueless and loveable like the cops in 21JS. They come across as stupid. And again, a wasted Ayoade lends further credence to the notion that the filmmakers have liked British comedy, but not necessarily got it- it's as it he's only here as a favour to his Submarine producer, Stiller, but the contrived plot and less likeable characters are allowed to get ahead of him.

The film is helped by some decent creature effects, with the amazing Doug Jones donning prosthetics as the primary alien actor, and at least some commitment to decent practical effects over sub-par CGI. However, there's far less of the alien action and sci-fi intrigue, than of the four protagonists tooling around in a basement man-cave. The focus on domestic issues should ground the extraterrestrial stuff, and keep the audience's sympathy, but the domestic stuff turns out to be the only thing more boring than the alien plot. It's also another of those scripts where the lack of any actual jokes is masked by a neverending salvo of swearing. Why the fuck did the fucking chicken cross the fucking road? Because shitty cocking cum fucking balls. As usual, you just become de-sensitised to the impact of any of those words once they're so overused. 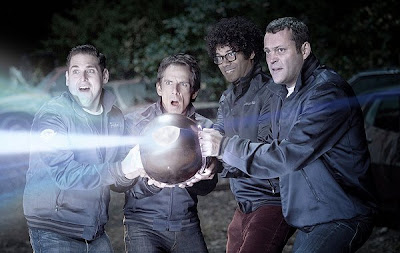 The Watch exhibits many of the reasons why I'd put Vince Vaughn in movie jail for a spell, but few of the film's problems are all his fault. It comes from a warmed-over script, in which you don't really sense any of Rogen and Goldberg's personality, with dependable stars crowding out the panache and comic timing of actors like Richard Ayoade. I don't know that I can complain that any other film is crass, in the week that we were subjected to Keith Lemon, but it's certainly not got much in the way of taste, which only further shows up its lack of imagination.