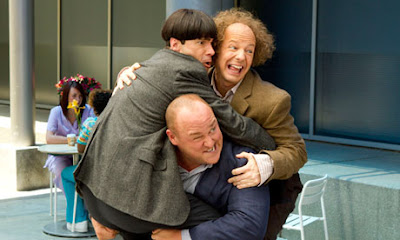 After one or two comedic disasters this week, I hope it's time for me to possibly make a change. While I believe that if you'd already decided to see those movies before I reviewed them, nothing I said could have changed your mind, here's one that you might have dismissed out of hand, and yet turned out a damn sight better than the more popular choices.

Bobby and Peter Farrelly are behind this revamp of the vaudeville comedy short films, but retain many of the same sensibilities in the transfer to the 21st century. So, The Three Stooges are Moe, Larry and Curly, now played by Chris Diamontopoulos, Sean Hayes and Will Sasso, respectively, and they still live in the orphanage where they were abandoned as babies. With all the injuries and accidents they cause with their hijinks, the orphanage has ran up an insurance bill of $830,000, and faces imminent closure. The Stooges go into the city to try and save their home and get into further misadventures.

The plot is simplicity itself, because the intention isn't to snarkily deconstruct the characters and their antics in the joyless, painfully post-modern style of certain other reboots I could mention- Raja Gosnell's Scooby Doo springs to mind. Instead, the plot is merely the catalyst for Moe, Larry and Curly to go and beat the shit out of each other somewhere else, after spending the first act doing just that at the orphanage. Slapstick violence is the main staple of these characters, and it's been lovingly and gleefully preserved in this revamp. 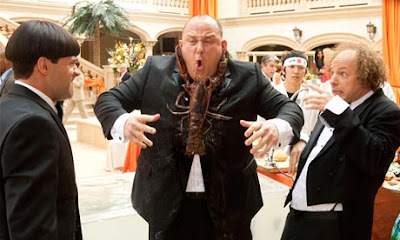 The actors chosen to play the Stooges might easily be dismissed as mugging caricatures of the original actors, but they're still doing uncanny impersonations that help to capture the spirit of the thing, rather than being overly reverent. In this casting, and in the old-fashioned humour, you can see that this is a passion project for the Farrellys. They're obviously huge fans of the Stooges, and have been working on this project for so long, there was a point when Sean Penn, Jim Carrey and Benicio del Toro were considered for the lead roles. It's tough to imagine stranger casting, in light of the finished film.

Then again, Penn, Carrey and del Toro are all name actors, and could have been considered as off-setting the risk on a labour of love like this one, which wouldn't seem to have great prospects at the box office. There are remnants of that stunt casting in the film, and these are, by far, the least enjoyable aspects. The much-maligned Jersey Shore segue only grats after a while, initially directing bursts of cathartic violence at that talentless cast of titamaboobs. Speaking of titamaboobs, the casting of Kate Upton seemed to backfire under pressure from Catholic organisations in America, resulting in a reshot and much diminished role for that one nun who happens to look like a 20-year-old supermodel.

But if these were merely concessions that allowed the Farrellys to do what they wanted to do- a film that modernises carefully, but not too tentatively, with a lot of groan-worthy, but chucklesome gags- then I would say it was worth it. I laughed consistently throughout The Three Stooges, and on top of that, I admire the way in which they kept it PG. The slapstick violence stays entirely on the right side of slapstick, with the foley department unabashedly rummaging through the eye-poke sound effects and "woob woob woob"s of the source material. Even the obligatory "Don't Try This At Home" notice that underlines the mayhem for the young audience manages to be cheeky, as much as cautionary. 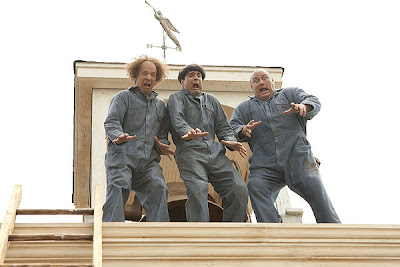 When I saw The Three Stooges, it was the kids in the audience who were laughing hardest and longest. It's childish and juvenile humour, but I mean that in the best way- too few filmmakers are doing proper live-action comedies for kids these days. The Farrellys proudly romp through nostalgia to make a properly retro film, even though it doesn't escape entirely unscathed from the heavy hand of a concerned studio. But despite wearing thin, the biggest surprise of the film is the Jersey Shore segment, which looks upon the shamelessly horrible reality series with a youthful eye and thinks it all to be a bit silly. And rather than dragging the Stooges down to its level, this film gives it a sock in the mouth, pokes its eyes and puns it into submission.