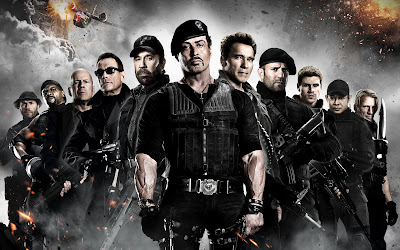 If you'd told me at this point in 2010, that I would enjoy the sequel to The Expendables more than the next Bourne movie, you'd have sounded crazy to me. It's been one of those weeks, folks, but make no mistake, The Expendables 2 is no masterpiece either. This time around, Sylvester Stallone gives the director's seat over to Con Air director Simon West, but he still co-wrote the script, so while some of it is better, some of it is the same again.

The cast of action stars returns as the same ludicrously monikered characters from part one, with a couple of new recruits into the mix too. After screwing him over on principle in the first film, shady CIA guy Mr. Church wants the Expendables to repay their debt to him, by retrieving an all-important computer. The computer is lost in an encounter with international terrorist Vilain (no, seriously) that makes the affair much more personal for the gang, and they seek to prevent Vilain from getting control of an absurd amount of ex-Soviet weapons grade plutonium.

Let's start with the problems that are carried over from part one. Despite the fact that we wouldn't even have a sequel if the original, R-rated movie hadn't grossed quite a lot at the box office of 2010, this has still been shot for a PG-13 and then augmented with CGI gore. The gore still looks terrible, and it's unforgivable that someone, somewhere at Lionsgate, was still umm-ing and aah-ing about whether or not to have blood and swearing. Profanity is harder to add in with special effects, so there's basically nothing stronger than a "shit" in any of the film's dialogue. 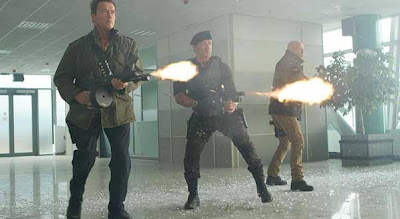 Secondly, the script is sub-par, especially when it comes to quips and one-liners. There are very few iconic moments in either of these films, and it feels like the genuinely memorable bits happened by accident in the first film- that's why we get a reprise of Terry Crews gleefully blasting baddies with an enormous automatic weapon in the first ten minutes, by way of showing us that the boys are back. In The Expendables 2, the quip deficiency is only more apparent by the insistence on quoting and referencing other movies. In his expanded role, Arnold Schwarzenegger has maybe one scene in the whole movie that doesn't make reference to one of his previous lines or roles, or that of another cast member.

However, the other major problem with The Expendables is at least partly rectified here. I remarked at the time that Eric Roberts was hardly a villain worthy of all these action stars coming together to kick ass and blow shit up. Here, we have Jean Claude Van Damme in the role of Vilain, and quite aside from being a more sinister and menacing presence than Roberts, you have a villain who is at least as iconic as the heroes. Your mileage may vary, but the odds are, if you're excited about The Expendables, you're excited about Stallone fighting Van Damme. Likewise, Scott Adkins makes a better henchman than Stone Cold Steve Austin- such is the testosterone-fuelled enmity in his dynamic with Jason Statham that you just know they'll soon be pounding seven shades of shit out of each other from the very moment that they first meet.

If that were the only predictable thing about The Expendables 2, then it would barely be an Expendables movie at all, but there are still some surprises along the way. Dolph Lundgren and Jason Statham are, once again, the MVPs, but this time it's because they're actually allowed to have cool moments. The re-purposing of Lundgren's extremely muddled character from the first film, into a comic-relief chemical engineering graduate (a qualification that the actor has in real life) gives him some canny moments of both humour and bad-assery, and Statham has better fight scenes here than he has in any of his solo projects since The Expendables.

I think I've stressed the point that it's a better film than its predecessor, but let's not forget that these are the Happy Madison productions of action cinema. It's a turbo-powered Love Boat for stars like Schwarzenegger, who really seems to have lost his knack for action heroism in this one, and his friends, with anachronistic guest star appearances by young'uns like Statham and newcomer Liam Hemsworth. As to the latter, either he's very bad at picking roles, or he's just not taking off in the way that some would hope- regardless, there's a reason why we still all think of Tom Hiddleston when you mention Thor's brother. There are awkward interactions between the elders and the young blood throughout, particularly in a misguided romantic subtext between Stallone and Nan Yu's CIA super-woman, Maggie. 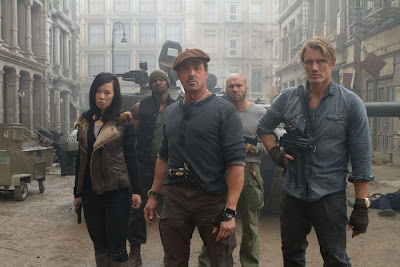 The strangest thing is, having really disliked parts of the first one, I was more ambivalent about The Expendables 2. And yet the people who really enjoyed part one seems a little more abashed by the goofy self-parody that is entailed in this sequel. Most of the cast's comic timing is off, which makes the worse dialogue in the script even more cringeworthy. The only team-up movies that the first film had to contend with were The Losers and The A-Team, but this one comes in a summer that peaked with The Avengers- it was always going to look more anachronistic, especially after trying to evade the R-rating that made the original so popular with unironic action buffs. If this has never been your thing, you'll run out on this movie faster than Jet Li did.

Everybody here knows that they are just making another loud, stupid, crazy action film that’s not going to change the world, but still offer you plenty of entertainment in a short limit of hour 40 minutes and that’s all that mattered to me. Great review Mark.