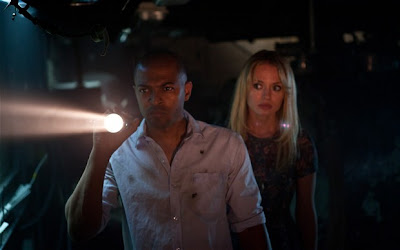 Noel Clarke has already given us the crowd-pleasing sports drama Fast Girls this month, and later this year, his romantic comedy, The Knot, will also arrive in UK cinemas. Now, he continues to show a keen commercial instinct outside of his urban dramas with another film that's slightly outside of his wheelhouse, the sci-fi horror flick Storage 24.


Clarke also has the starring role in this one, as Charlie, a guy who's just been dumped by his long-term girlfriend, Shelley. With his best mate Mark in tow, he goes to pick up his stuff from their shared locker in the titular storage facility, only to discover that Shelley has had the same idea.

When a military cargo plane crashes down to Earth in central London, its cargo, a vicious extraterrestrial, escapes into Storage 24. The place is maximum security, so after a malfunction with the front door and shutters, Charlie and Mark are trapped inside, along with Shelley and her friends Nikki and Chris, depending on one another to survive.

Storage 24 is now showing in cinemas nationwide.
Posted by Mark at 09:00